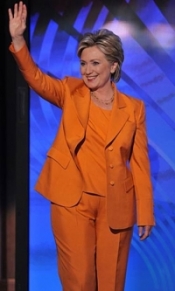 Sister Gaylee Van Dyke
There's a new website, www.a-cnn.com, with some really interesting stuff on it. But, some of it almost seems like it must be satire, right? I mean, check this one out:

(A-CNN Report) Newly appointed spokesperson for the LCWR (Liberal Community of Women Revolutionaries), Sister Gaylee Van Dyke, opened her first press conference with an invocation composed by her long-time associate and companion, Sister Minnie Brayne.  Sister explained that this invocation will replace the antiquated, divisive “Sign of the Cross” at all their functions and gatherings.  She proceeded with hands held high:


“In service to Father Universe, Mother Earth and Spirit of Vatican II.  A-Person” (Sister explained that the term “Amen” was too gender specific. Furthermore, she expressed the hope that this supplication will be universally adopted for Catholics and non-Catholics alike.)

Finding it difficult to hide her triumphant glee, Sister Van Dyke expressed her heartfelt gratitude to the Bishop of Rome and his Churchmen (some were convinced she said “henchmen”) for liberating the LCWR and empowering them to continue their great work without fear of reprisals from rigid restorationists.  READ MORE HERE

REMNANT COMMENT: And what's with Sister Van Dyke, the dead ringer for Hillary Clinton?  We'd better keep an eye on this www.A-CNN.Com site.

[Comment Guidelines - Click to view]
The Remnant values the comments and input of our visitors. It’s no secret, however, that trolls exist, and trolls can do a lot of damage to a brand. Therefore, our comments are heavily monitored 24/7 by Remnant moderators around the country.  They have been instructed to remove demeaning, hostile, needlessly combative, racist, Christophobic comments, and streams not related to the storyline. Multiple comments from one person under a story are also discouraged. Capitalized sentences or comments will be removed (Internet shouting).
The Remnant comments sections are not designed for frequent personal blogging, on-going debates or theological or other disputes between commenters. Please understand that we pay our writers to defend The Remnant’s editorial positions. We thus acknowledge no moral obligation whatsoever to allow anyone and everyone to try to undermine our editorial policy and create a general nuisance on our website.  Therefore, Remnant moderators reserve the right to edit or remove comments, and comments do not necessarily represent the views of The Remnant.
back to top
Last modified on Thursday, August 27, 2015
Tweet

More in this category: « Look What They've Done to Anne Catherine Emmerich Kasper the Blasphemer »