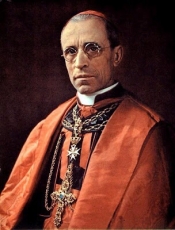 If it can be determined with absolute confidence that the future pope really said this then it should continue to be shared.  I know the quote is a powerful weapon for us in the battle against the evil forces within the Church but it is more important to be truthful lest our credibility be challenged.

Below is the critique with a link to the web page from which it originated.

Thank you very much.

“I am concerned by the Blessed Virgin’s messages to Lucy of Fatima. Mary’s persistence about the dangers that menace the Church is a divine warning against the suicide of altering the Faith, in Her liturgy, Her theology and Her soul…. I hear all around me innovators who wish to dismantle the Sacred Chapel, destroy the universal flame of the Church, reject her ornaments and make her feel remorse for her historical past.

A day will come when the civilized world will deny its God, when the Church will doubt as Peter doubted. She will be tempted to believe that man has become God. In our churches, Christians will search in vain for the red lamp where God awaits them. Like Mary Magdalene, weeping before the empty tomb, they will ask, ‘Where have they taken Him?’”

The quote is a translation from the French. The original text can be found on p. 52 of a book published in 1972 entitled, “Pie XII devant l’Histoire”, by Georges Roche and Philippe Saint Germain. The authors claim that these words were a confidence made by the Pope to Enrico Pietro Galeazzi. The book was given a scathing review by Emile Poulat at the time of its publication in “Archives des sciences sociales des religions” (vol. 33, no. 33, p. 292-293). Poulat called the work “invraisemblable, dans tous les sens imaginable du mot,”, ie. improblable, bearing little resemblance to the truth. He criticized the authors for ignoring the secondary literature, for giving no blibliography for the primary sources they supposedly consulted, for thinking that documents drawn from the Vatican Archives and prepared for publication by the Jesuits were documents drawn from the Roman Archives of the Society of Jesus, for claiming published records were as yet unpublished. Poulat says that the authors’ work is riddled with minor errors, as well as with other errors less minor. “Tout est de la meme encre fantaisiste”–all from the same fanciful ink.

[Comment Guidelines - Click to view]
The Remnant values the comments and input of our visitors. It’s no secret, however, that trolls exist, and trolls can do a lot of damage to a brand. Therefore, our comments are heavily monitored 24/7 by Remnant moderators around the country.  They have been instructed to remove demeaning, hostile, needlessly combative, racist, Christophobic comments, and streams not related to the storyline. Multiple comments from one person under a story are also discouraged. Capitalized sentences or comments will be removed (Internet shouting).
The Remnant comments sections are not designed for frequent personal blogging, on-going debates or theological or other disputes between commenters. Please understand that we pay our writers to defend The Remnant’s editorial positions. We thus acknowledge no moral obligation whatsoever to allow anyone and everyone to try to undermine our editorial policy and create a general nuisance on our website.  Therefore, Remnant moderators reserve the right to edit or remove comments, and comments do not necessarily represent the views of The Remnant.
back to top
Last modified on Sunday, August 23, 2015
Tweet
More in this category: « Please don’t call me “Ms.” Voris 2010: New Mass “almost totally downplays all Catholic worship” »