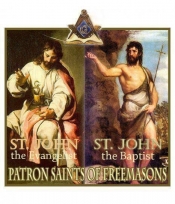 "Above all, we trust in the intercession of the Immaculate Mother of Jesus and our Mother, in the protection of the Ss. Peter and Paul, "Princes of the Apostles," as well as of the Ss. John the Baptist and John the Evangelist, our special patrons…"

And when he actually opened the Council, Pope John XXIII again called upon Sts. John the Baptist and John the Evangelist to “intercede for us to God”:

"O Mary, Help of Christians, Help of Bishops, of whose love we have recently had particular proof in thy temple of Loreto, where we venerated the mystery of the Incarnation, dispose all things for a happy and propitious outcome and, with thy spouse, St. Joseph, the holy Apostles Peter and Paul, St. John the Baptist and St. John the Evangelist, intercede for us to God."

Now it’s probably nothing, and with a hat tip to our friend PD, one wonders if there’s anything to be made of the fact that the special patrons of Freemasonry are also Sts. John the Baptist and John the Evangelist.   Probably not. Right?

In his article, “…And Dedicated to the Holy Saints John” An Inquiry into the designation of the Saints John as Patron Saints of Freemasonry”, W. Bro. Harvey L. War, Jo. PM of the Grand Lodge of Florida writes: 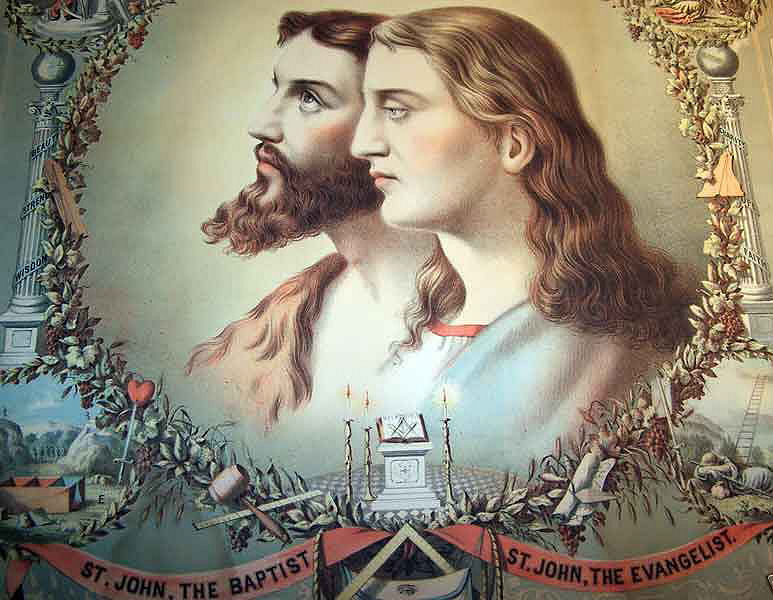 (Photo of a Masonic Image of Patron Saints John)

It is proper then that as we celebrate the feast day of St. John the Baptist, we pause a few minutes to consider the history and background of this celebration.

As Masons we are all familiar with the phrase “erected go God and dedicated to the Holy Saints John.” All of our Blue Lodges are so dedicated, yet we never hear any other information regarding these “Holy Saints John” or anything to explain why we refer to them as the Patron Saints of Freemasonry.

They are referenced in the Entered Apprentice Lecture as being “perfect parallels in Masonry as well as in Christianity.” It is almost an afterthought of a reference, given that we dedicated every Lodge to these two men. Who were these Saints John? Why are they important to us as Freemasons?

Go figure, eh? There were always a lot of wild theories back in the day that John XXIII was a Freemason. And of course Archbishop Annibale Bugnini (1912–1972), the father of the New Mass himself, was abruptly demoted from the Roman Curia and sent to Iran by Paul VI under suspicion of being a Freemason. He denied this, of course, but in his own biography does admit that suspicion of Freemasonry was the reason he was demoted and sent to Iran….He claimed Paul VI was, eh, “misinformed.”

It’s likely we’ll never know for sure, just as we’ll never know the full impact Freemasonry (a secret society condemned by more popes than any other single organization, most recently by the Holy Office under Pope John Paul) had on the sacking of the human and liturgical elements of the Catholic Church. Theories abound, of course, and I’m not suggesting the Council’s patron saints as designated by John XXIII prove anything at all. I just find it to be an interesting coincidence.

What do you think?

Please Help The Remnant Stay in the Fight!

[Comment Guidelines - Click to view]
The Remnant values the comments and input of our visitors. It’s no secret, however, that trolls exist, and trolls can do a lot of damage to a brand. Therefore, our comments are heavily monitored 24/7 by Remnant moderators around the country.  They have been instructed to remove demeaning, hostile, needlessly combative, racist, Christophobic comments, and streams not related to the storyline. Multiple comments from one person under a story are also discouraged. Capitalized sentences or comments will be removed (Internet shouting).
The Remnant comments sections are not designed for frequent personal blogging, on-going debates or theological or other disputes between commenters. Please understand that we pay our writers to defend The Remnant’s editorial positions. We thus acknowledge no moral obligation whatsoever to allow anyone and everyone to try to undermine our editorial policy and create a general nuisance on our website.  Therefore, Remnant moderators reserve the right to edit or remove comments, and comments do not necessarily represent the views of The Remnant.
back to top
Last modified on Tuesday, August 18, 2015
Tweet