PETP: People for the Ethical Treatment of Plants 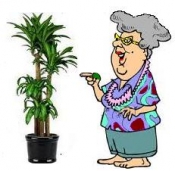 That’s right! What about the rights of our leafy friends?

The other day I wrote on the website 1Peter5 a short piece about why the notion of “animal rights” is meaningless. Animals do not have rights because they have no duties. They have no need of duties because they do not have free will or rational souls; neither intellect with which to understand duties nor the will to fulfill them. While the American dentist may have had a duty not to do what he did, Cecil the Lion did not have the right to be protected from arbitrary killing, certainly not in the way that an unborn human child has that right.

This morning, I saw a piece in the Guardian about the next trendy absurdity of the “rights” movement: plant rights.

Plants are intelligent. Plants deserve rights. Plants are like the Internet – or more accurately the Internet is like plants. To most of us these statements may sound, at best, insupportable or, at worst, crazy. But a new book, Brilliant Green: the Surprising History and Science of Plant Intelligence, by plant neurobiologist (yes, plant neurobiologist), Stefano Mancuso and journalist, Alessandra Viola, makes a compelling and fascinating case not only for plant sentience and smarts, but also plant rights.

I know we’ve been banging on about this at the Remnant and other places and we might be getting a little sick of it, but bear with me as I take one more tilt at the modern fake “rights” industry windmill.

Just for a moment, I’m going to put aside my usual ironic approach and just tell it plainly: neither animals nor plants have “rights,” properly understood. Rights come from one source: duties. Duties come first and we have only the “right” to those conditions and objects that we need to fulfill our duties. As rational beings, we are obliged to use the faculties of our free will and intellect to understand and fulfill those duties. The things we need to get that accomplished are the only things we have “rights” to.

It’s only when we get to the fourth Commandment that we start hearing about our duties to each other. Believe it or not, our duty to the environment, including to the proper care of the plants and animals, is based not on any duty to them as plants and animals, but on our duty to each other. We all need a clean and well-functioning environment in order to fulfill all our other duties. Moreover, our duty to look after the natural world was given to us directly from the mouth of God to our first parents. We are responsible for creation, at least the planetary part of creation, because it is literally our God-given job. This task predates even the Fall. According to Scripture, it even predates the creation of Eve: “The Lord God took the man and put him in the garden of Eden to till it and keep it.”

Because rights are based exclusively on duties, the existence of rights must presuppose the existence of a free will ordered by a rational intellect. Neither plants nor animals have these, which means they cannot freely fulfill any duties. The upside for the plants and animals is that by the simple fact of their existence, they give glory to God. They fulfill their ontological purpose just by, so to speak, running their inborn programmes. They get to fulfill their particular purpose of existence, their “vocation” so to speak, simply by being what they are and doing what they were designed to do. This is just part of the gorgeous and amazing orderliness of the universe that we can discover by studying math or physics or biology or music or art.


I believe that this natural, unwilled giving of glory to God is what attracts these godless secularist discoverers of new “rights.” I don’t think this is entirely ideological blindness. The natural world is indeed glorious and its glory is a reflection of the Divine Glory, love of which is natural to us: “Ever since the creation of the world his invisible nature, namely, his eternal power and deity, has been clearly perceived in the things that have been made.”

I’ve known quite a few environmentalists and there is certainly among them a genuine love of the natural world, one which I share passionately, from the intricate workings of the ecosystems of the mountains where I live to the staggeringly complex systems of cellular micro-mechanics.


The fact that animals and – because now apparently we need to say this – plants have no rights, should not deter us in the least in our exercise of our duty to protect them and cultivate and protect their environment, however. We humans do have rational souls, which means we have both intellect and free will, and therefore we have duties. A big part of that duty is the proper care of those parts of creation that have been given into our care. We have an obligation not to abuse that which is given to us in trust, which does not belong to us but to God. We are, moreover, part of the creation which belongs to Him alone, which means that the materialist’s notion of man as the enemy of creation is equally nonsensical.

The difficulty with this whole weird craze for “animal rights” (and now the reductio ad absurdam of “plant rights”) is that having detached the notion of rights from their origins in duty, we have rendered “rights” completely arbitrary; subject not to the eternal will of God, but to the ephemeral and ever-changing will of humans. We "discover" new "rights" every time someone has a fancy to do something or want something. This has now gone so far as to enable us to "discover" new "rights" according to our most childish sentimentalist imaginations. "Plant rights" in a sane society would be thought of seriously only by imaginative six-year-old girls and quickly corrected by responsible parents.

But we’re all six-year-old girls now. Thus we have a growing culture, especially in the UK, of the "right not to be offended," which really means in practice the "right" not to be confronted, corrected or opposed about any idea or impulse that crosses our wee minds.

We have a new “rights culture” that simply boils down to “I have a right to whatever I happen to want.” But of course, because we humans, when we have unhooked our will from the mind of God, tend to want things that harm others or ourselves, (and at the very least tend to want things in ways that create conflicts between individuals and groups,) this notion of “wants = rights” will always end up devolving down to using some form of force to get what one individual or group wants over the wantsrights (and often the genuine rights) of other individuals or groups. The powerful, either physically or politically, are the ones whose “rights” now take precedent in every conflict; he who has the most thugs wins.

This process has been amply illustrated by the various and multiplying procedures of the Sexual Revolution, where, for example, we want “free sex,” and generally a life of uninterrupted personal indulgence, and get it by extracting and killing the troublesome and unwanted “products of conception.” The fact that we all learned in elementary school where babies come from is brushed aside as irrelevant. The new rights come down to a power match between the right to life and the “right” to have unlimited carefree sexual congress. The baby is weak; the mother is powerful and has the law, the government and the abortion industry to back her up. She and the law and the government and the abortion industry can simply wave a hand, call the baby a “foetus” for a little emotional cover, and get it out of the way.

There is going to be no end to this process of “discovering new rights,” either magically buried between the lines of the US constitution and visible only to the eyes of special interest lobbyists, or, in other countries and international bodies, simply out of the whole cloth of the imaginations and desires of individuals. This will continue until there is an acknowledgement that there is at least such a thing as an objective moral order, as there is an objective physical order.

The recognition in the secular civil realm of the existence of an objective moral law is what in the Catholic Church we call “the Social Reign of Christ the King.” Let us pray for its swift return… before someone “discovers” a new “right” not to have any Catholics around.

[Comment Guidelines - Click to view]
The Remnant values the comments and input of our visitors. It’s no secret, however, that trolls exist, and trolls can do a lot of damage to a brand. Therefore, our comments are heavily monitored 24/7 by Remnant moderators around the country.  They have been instructed to remove demeaning, hostile, needlessly combative, racist, Christophobic comments, and streams not related to the storyline. Multiple comments from one person under a story are also discouraged. Capitalized sentences or comments will be removed (Internet shouting).
The Remnant comments sections are not designed for frequent personal blogging, on-going debates or theological or other disputes between commenters. Please understand that we pay our writers to defend The Remnant’s editorial positions. We thus acknowledge no moral obligation whatsoever to allow anyone and everyone to try to undermine our editorial policy and create a general nuisance on our website.  Therefore, Remnant moderators reserve the right to edit or remove comments, and comments do not necessarily represent the views of The Remnant.
back to top
Last modified on Saturday, August 8, 2015
Tweet

More in this category: « John Kasich and The Decline of Social Conservatism Not So Amazing Grace Inside the Vatican »