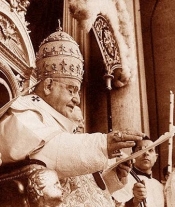 Pope John XXIII
In this week's Letters to the Editor column (July 31st print edition of The Remnant) there is a discussion of the conciliar popes and the Council. One writer points out that Pope John XXIII summoned the Italian bishops to the Roman Synod of 1959 as an anticipation of the Second Vatican council. In a massive reaffirmation of traditional practice, the pope solemnly confirmed the use of Latin, condemned all attempts at creativity on the part of the celebrant of Holy Mass, ordered Gregorian Chant, and forbade women entry to the altar area.

One wonders why Pope Francis makes no mention of any of this when he dubs himself the great 'Pope of Vatican II', condemning as neo-pelagian those who long for a return to pre-conciliar liturgical sanity in the Catholic Church.

Has Francis forgotten that, just one year later, in 1960, Pope John XXIII issued his Apostolic Constitution Veterum Sapientia, On Promoting the Study of Latin, as the Church's cultural and religious heritage and as its living language -- universal, immutable, and non-vernacular. He bound bishops to "be on their guard lest anyone under their jurisdiction, being eager for innovation, write against the use of Latin in the teaching of the higher sacred studies or in the liturgy, or through prejudice makes light of the Holy See's will in this regard or interprets it falsely."


Pope John attributed a very special importance to this document, promulgating it with a solemnity unique in the history of the present century -- in person, in St. Peter's upon the Confession of St. Peter himself, and in the presence of the cardinals and of the Roman clergy.

Perhaps, given how things panned out, this may help explain the last words of the now canonized Pope John XXIII. On his deathbed, as reported by Jean Guitton, one of only two Catholic laymen to serve as a peritus at the Council (the other being Romano Amerio), Pope John cried out: "Stop the Council; stop the Council."

So, what really happened at Vatican II?

[Comment Guidelines - Click to view]
The Remnant values the comments and input of our visitors. It’s no secret, however, that trolls exist, and trolls can do a lot of damage to a brand. Therefore, our comments are heavily monitored 24/7 by Remnant moderators around the country.  They have been instructed to remove demeaning, hostile, needlessly combative, racist, Christophobic comments, and streams not related to the storyline. Multiple comments from one person under a story are also discouraged. Capitalized sentences or comments will be removed (Internet shouting).
The Remnant comments sections are not designed for frequent personal blogging, on-going debates or theological or other disputes between commenters. Please understand that we pay our writers to defend The Remnant’s editorial positions. We thus acknowledge no moral obligation whatsoever to allow anyone and everyone to try to undermine our editorial policy and create a general nuisance on our website.  Therefore, Remnant moderators reserve the right to edit or remove comments, and comments do not necessarily represent the views of The Remnant.
back to top
Last modified on Tuesday, August 4, 2015
Tweet

More in this category: « Mothers Should be Compensated! John Kasich and The Decline of Social Conservatism »