Christiana Figueres is the current “Climate Chief” of the United Nations. In April she informed us that she sees population control as key to saving the climate. And by “population control,” as all know by now, we are talking abortion, birth control, and sterilization. The following is from an interview between her and “Climate One” founder Greg Dalton:

DALTON: A related issue is fertility rates in population. A lot of people in energy and environmental circles don’t wanna go near that because it’s politically charged. It’s not their issue. But isn’t it true that stopping the rise of the population would be one of the biggest levers and driving the rise of green house gases?

FIGUERES: I mean we all know that we expect nine billion, right, by 2050. So, yes, obviously less people would exert less pressure on the natural resources.

DALTON: So is nine billion a forgone conclusion? That’s like baked in, done, no way to change that?

China may be the world’s top emitter of carbon dioxide and struggling with major pollution problems of their own, but the country is “doing it right” when it comes to fighting global warming says Figueres.

“They actually want to breathe air that they don’t have to look at,” she said. “They’re not doing this because they want to save the planet. They’re doing it because it’s in their national interest.”

Figueres added that the deep partisan divide in the U.S. Congress is “very detrimental” to passing any sort of legislation to fight global warming. The Chinese Communist Party, on the other hand, can push key policies and reforms all on its own. The country’s national legislature largely enforces the decisions made by the party’s Central Committee and other executive offices.

Even more alarming is Figueres’ ideas on a “guided” “centralized transformation” that will make everyone’s lives “very different.” She stated the following in a November 2012 interview with Yale Environment 360:

So what does Figueres have to do with the Pope’s latest encyclical endorsing the theory of man-made global warming? As far back as May of 2014 Christiantoday.com reported:

Christiana Figueres, head of the UN's climate change secretariat, told an audience at St Paul's Cathedral that a new encyclical on the environment was forthcoming.

A Papal encyclical, a letter explaining the Catholic Church's views on a subject, sent out to the approximately 5,100 Catholic bishops worldwide, is an indication that a particular issue has become of great importance to the Church.

Ms Figueres expected that it would be released before the UN's climate change summit in Paris, in November and December of 2015.

However she was unsure if it would be released before the summit in September 2014 where UN Secretary General Ban Ki Moon is encouraging world leaders to draw up ambitious plans ahead of the 2015 summit.

Regardless of timing however, Ms Figueres was quoted in Business Green as saying that she believed that such an encyclical "could provide a strong signal to governments, cities, companies and citizens everywhere of the moral, ethical and responsibility dimensions of climate action"...

The Vatican has not offered any comment on the possibility of an encyclical on climate change. However in January, Pope Francis was reported to have begun drafting a text on ecology and the environment, which could become an encyclical.

Thus, Ms. Figueres predicted that there would be a papal encyclical on the environment before November 2015, when the Vatican stated it was only a possibility. Pretty impressive! Then Ms. Figueres met with Pope Francis in November 2014 as her Twitter feed attests: 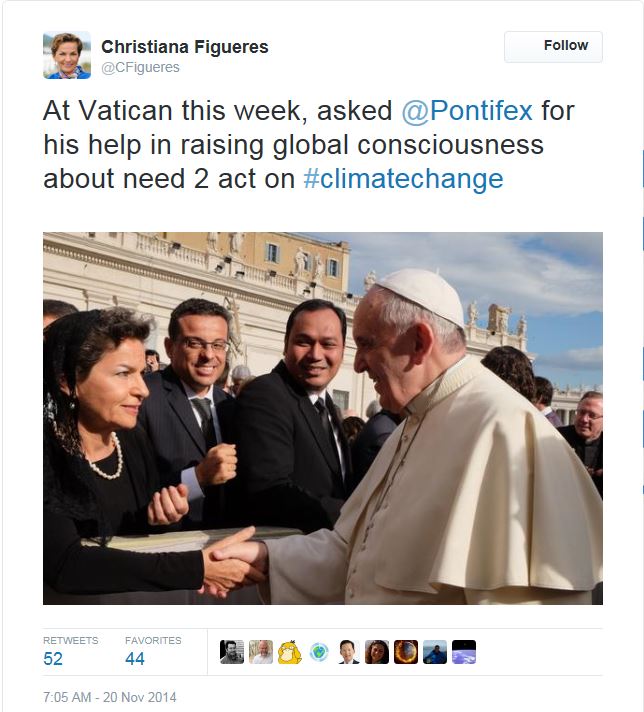 By all accounts Ms. Figueres is thrilled at the encyclical and its perfect timing. As the AP reports:

The U.N.'s top climate official, Christiana Figueres, calls the pope's encyclical a "clarion call" that should guide world leaders to a "strong and durable" climate agreement in Paris at the end of the year.

The deal will be the first time all countries, both rich poor, agree to take climate action. But experts say the climate targets pledged so far won't suffice to keep global warming below 2 degrees C (3.6 F), the goal of the U.N. talks.

Figueres has long been arguing that transitioning to a low-carbon economy makes economic sense and has been trying to get corporate leaders aboard.

Welcoming the pope's message, she said that "coupled with the economic imperative, the moral imperative leaves no doubt that we must act on climate change now."

Ms. Figueres has also posted the following on her Twitter feed: 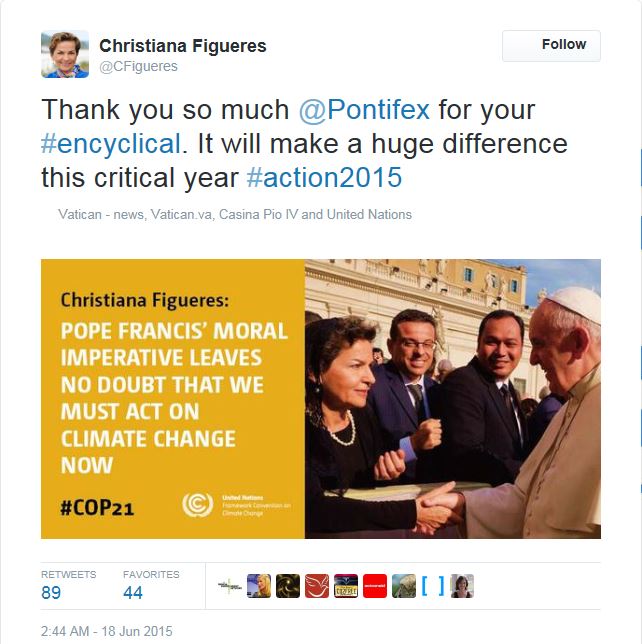 In related news it seems those in favor of action on “climate change” are getting braver about showing their true colors. In September of 2014, a “Climate Rally” took place in Oakland, CA where the keynote speaker seemed to agree with Ms. Figueres’ sentiments:

Our situation is dire. But before we can begin to address any of the possible solutions, it is important that we discuss the root cause of the environmental catastrophe that we are experiencing. What we are facing is a systemic problem. A conflict between two systems.

First is the environmental system, which sustains life on Earth. Then there is the economic system of capitalism that is attacking the stability of our environment. Capitalism and a healthy environment cannot coexist!

… They [the government] are not going to put a stop to the capitalist practices. They can only mitigate them. But we’re beyond the point of mitigation: What we need is transformation!

… That is why we must look at each other as allies. We are the ones that, through our collective activity, will be able to create the change that we want to see in our world. We must look around and see who agrees with us. That in order to stop what is foreseen as the sixth great extinction, that could include all of us, we’re going to have to disrupt and transform the capitalist system. That is why we say, ‘System Change, Not Climate Change!’

… We must go into our workplaces, schools, churches, communities, and talk to people about what we have learned here today.

… We can see that capitalism has run its course, and it has written its own death sentence.

It seems the only thing left is to tie the need for socialist global transformation due to unproven “climate change” to the poor in some way and call for “radical change.” With Laudato Si’ the Pope can now say “Mission Accomplished!” As Pope Francis states:

171. The strategy of buying and selling “carbon credits” can lead to a new form of speculation which would not help reduce the emission of polluting gases worldwide. This system seems to provide a quick and easy solution under the guise of a certain commitment to the environment, but in no way does it allow for the radical change which present circumstances require. Rather, it may simply become a ploy which permits maintaining the excessive consumption of some countries and sectors…

175. The same mindset which stands in the way of making radical decisions to reverse the trend of global warming also stands in the way of achieving the goal of eliminating poverty. A more responsible overall approach is needed to deal with both problems: the reduction of pollution and the development of poorer countries and regions. The twenty-first century, while maintaining systems of governance inherited from the past, is witnessing a weakening of the power of nation states, chiefly because the economic and financial sectors, being transnational, tends to prevail over the political. Given this situation, it is essential to devise stronger and more efficiently organized international institutions, with functionaries who are appointed fairly by agreement among national governments, and empowered to impose sanctions.

[Comment Guidelines - Click to view]
The Remnant values the comments and input of our visitors. It’s no secret, however, that trolls exist, and trolls can do a lot of damage to a brand. Therefore, our comments are heavily monitored 24/7 by Remnant moderators around the country.  They have been instructed to remove demeaning, hostile, needlessly combative, racist, Christophobic comments, and streams not related to the storyline. Multiple comments from one person under a story are also discouraged. Capitalized sentences or comments will be removed (Internet shouting).
The Remnant comments sections are not designed for frequent personal blogging, on-going debates or theological or other disputes between commenters. Please understand that we pay our writers to defend The Remnant’s editorial positions. We thus acknowledge no moral obligation whatsoever to allow anyone and everyone to try to undermine our editorial policy and create a general nuisance on our website.  Therefore, Remnant moderators reserve the right to edit or remove comments, and comments do not necessarily represent the views of The Remnant.
back to top
Last modified on Thursday, June 18, 2015
Tweet

More in this category: « Pope to Meet with Married Homosexual Activist, Remnant Gives Away Free Subscription Is the Blessed Virgin Too Catholic for the New & Improved Vatican? »