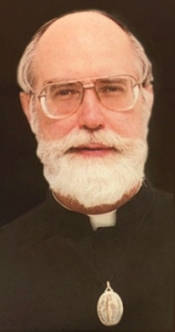 In typical schoolmarm fashion, Fr. Paul Nicholson took it upon himself this morning to register provocative protest against tomorrow’s funeral for the late Father Nicholas Gruner: “The Catholic Church, at the end of an age, finds herself weakened, not from persecution from without, but from internal betrayal and schism from within.   And the betrayal isn't simply coming from advocates for women's ordination or Catholics For A Free Choice.  No, the treachery isn't simply limited to leftists demanding change ... it extends to demagogues of the right who fanatically declare that they alone are the Church, and they alone hold the Depositum Fidei.   They look every bit the holy card of 1950.  But make no mistake ... they are proponents of a schism from the Catholic Church.

“These will be arrayed in all their “Catholic” pageantry on Saturday, May 9th, 2015, at the Scotiabank "Cathedral" in St. Catherine's, Ontario, for the funeral of the suspended priest Fr. Nicholas Gruner. [Remnant Editor's Note: Good one, Father!  By the way, the Scotia Center is not in St. Catherines Ontario, but rather Niagara Falls, Ontario on Stanley Avenue. MJM]

“Fr. Gruner distinguished himself with his magnificent obsession declaring that the consecration of Russia to the Immaculate Heart had never been done.  He produced an astonishing amount of material to vulnerable and illiterate Catholics, planting doubts about the hierarchy.  He sowed mistrust of the hierarchy wherever he went.”

This in-your-face post doesn’t seem to have attracted much attention thus far. Perhaps Father is counting on our response to generate traffic for his site, I don’t know.  Perhaps the better part of valor would be for us to just ignore it altogether. But it so happens that Father Gruner was a friend of mine, and it is difficult for me to see a humble priest bullied like this, his reputation pilloried (by a fellow priest, no less!), even as he lies defenseless in his own casket.

Father Gruner's friends are in mourning today; his family is devastated; even his critics are for the most part observing his passing with dignified silence. But not Father Paul, a priest who seems to enjoy limitless opportunities to fritter away his time on the Internet.

But I’ll take the bait, Father Paul. I am indeed offended by your use of the funeral of a holy priest to promote your blog. I’m offended by your bashing of the dead (both Archbishop Lefebvre and Father Gruner) and indulging in a self-satisfying rant against Bishop Bernard Fellay, who is coming all the way from Switzerland to celebrate the Fatima priest’s requiem tomorrow. (God bless Bishop Fellay for his charity and priestly dignity. He will not stoop to respond to Father Paul’s attacks against his good name, I guarantee it.)

I'm not sure what Father's problem is exactly, but he seems to crave negative attention. And although the parallel isn’t perfect, his prolonged rant against Father Gruner’s funeral reminded me of another cult leader who used to exploit God, His law and the funerals of dead soldiers for purposes of self-promotion, always claiming to be on the side of the angels, of course.

I've often wondered if the Phelps gang weren't in the employ of the far-Left, so offensive and polarizing were their counterproductive antics “in God’s name”.   We must pray for Father Paul Nicholson—a seemingly frustrated priest whose antics are becoming similarly strident. Faithful Catholics have been through enough, it seems to me, at the hands of  "conservative" celebrity priests who seem to crave the limelight just a wee bit too much.

Please, Father, let it go, and let's all remember the repose of the soul of Father Nicholas Gruner in our prayers today and especially tomorrow.   May he rest in peace.

[Comment Guidelines - Click to view]
The Remnant values the comments and input of our visitors. It’s no secret, however, that trolls exist, and trolls can do a lot of damage to a brand. Therefore, our comments are heavily monitored 24/7 by Remnant moderators around the country.  They have been instructed to remove demeaning, hostile, needlessly combative, racist, Christophobic comments, and streams not related to the storyline. Multiple comments from one person under a story are also discouraged. Capitalized sentences or comments will be removed (Internet shouting).
The Remnant comments sections are not designed for frequent personal blogging, on-going debates or theological or other disputes between commenters. Please understand that we pay our writers to defend The Remnant’s editorial positions. We thus acknowledge no moral obligation whatsoever to allow anyone and everyone to try to undermine our editorial policy and create a general nuisance on our website.  Therefore, Remnant moderators reserve the right to edit or remove comments, and comments do not necessarily represent the views of The Remnant.
back to top
Last modified on Friday, May 8, 2015
Tweet