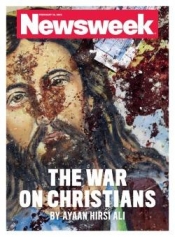 The notorious hate group, the Southern Poverty Law Center, is at it again, though their credibility remains in the toilet where it has reigned supreme for quite some time. Credibility doesn’t really matter when it comes to the jackbooted thugs entrusted with the task of terrorizing innocent citizens in a failing regime. I’m sure the Gestapo and the KGB didn’t enjoy a whole lot of credibility either, but that didn’t stop them from kicking in your door in the middle of the night if they felt like it.

But these days something is changing with our old pals over at the SPLC— which for years has had The Remnant listed as a hate group. (Note to group: I will get around to leading you all in hate very soon. I realize the SPLC crowned me your leader nearly ten years ago, but you’ll have to be patient just a little while longer as I attempt to figure out who we're supposed to hate).

Anyway, the SPLC's "investigations" are a joke to anyone who is paying attention. WorldNetDaily (also listed on the SPLC hate map) ran a story a couple years back entitled 'If you're not left wing, you're a hate group', which got right to the heart of the matter. In that article, author Jack Minor writes: “The sheriff of one of the country’s largest counties says a recent report by the Southern Poverty Law Center listing a major political party in Colorado as a dangerous group has absolutely no credibility and the group is like ‘the little boy who cried wolf.’ Weld County Sheriff John Cooke said the SPLC just lists groups its officials disagree with politically as ‘hate groups’. The SPLC has received funding from billionaire activist George Soros, who has also funded other left-wing groups including the Daily Kos, SEIU, MoveOn.org, the Huffington Post and Media Matters.”

When we filed our own Freedom of Information Act request on the SPLC some years ago, we discovered very much the same thing — law enforcement agencies around the country treat the SPLC “Intelligence” Report and Hate Map updates as junk mail, which is appropriate since the SPLC is, in fact, a direct mail fund-raising group that depends on “hate groups”, real or imagined, to freak out their donors and loosen up those all-important purse strings.

When it comes to real hate groups, however, the SPLC is not only strangely silent but oftentimes downright nurturing. Real haters tend to take real guns and start shooting real people, and the SPLC, being real cowards, needs to guard against retaliation. They know that cheek-turning Christians don’t retaliate. Muslims, on the other hand? Well, it’s not for nothing that there aren’t a whole lot of jihadist groups on the old SPLC Hate Map. In fact, there aren’t any. You follow?

The SPLC has a vested interest in not being too hard on jihadists. Why? Because when a young jihadist shoots up a Christian or patriot group, it can be argued that said group had it coming and that if said group had been shut down by the government (the ultimate goal of the SPLC), the jihadists would not have been tempted to go for the guns and dynamite in the first place.

Preposterous? Sure, but that’s the SPLC we all know and love. While they really enjoy being all big and tough with “Christian hate groups” — as though anyone, anywhere even knows what that means — they tend to give jihadists a pass, which some argue is tantamount to encouraging them.

The recent incident in Texas provides a case in point. Last Sunday a couple of jihadists were shot and killed after they’d attempted to do a Charlie Hebdo redo at a Dallas conference held for artists responsible for various cartoons of the Prophet Mohammed. The conference was sponsored by the American Freedom Defense Initiative, which – well, wouldn’t you know it! – is also listed as a SPLC hate group.

So, whatever you think of Pamela Geller’s anti-jihad/sharia law group, the SPLC now has another shooting to explain away, the last one being when some nut got himself all worked at the SPLC’s website and decided he needed to go shoot up the offices of Tony Perkins’ Washington, D.C.-based Family Research Council, also listed as a hate group by the SPLC.

So what was the SPLC’s reaction to this Texas shooting? Well, read it for yourself, but the gist seems to be that, yes, those naughty jihadists probably shouldn’t have tried to shoot up the Dallas conference, but, then again, look how ‘hateful’ that group is! “Geller has been a verbal bomber thrower for years, relentlessly shrill and coarse in her broad-brush denunciations of Islam,” writes Don Terry, in his SPLC spin piece that came out a day after the shooting. Well, shame on her then!

That these far-Left loons can get away with this reckless behavior is probably the most bizarre symptom of the terminal disease from which our society now suffers.  But this is what happens when God takes a forced holiday. We’re so soft and cowardly now that the SPLC either makes sense to us or we just don’t care. We are used to obscenity, and what word other than “obscene” better describes the fact that even after Christian groups are being targeted by gun-wielding crazies, with the evening news filled with images of Christians being beheaded and butchered all over the world—the SPLC still gets away with scare tactics and fundraising scams based on alleged Christian “hate groups” Americans need to fear…or else! (Or else, what? Exactly!)

Christian “hate groups”: Really? The SPLC seems to have dropped the letter “d”—it’s Christian hated groups this neo-KGB is after. And they’re not going to stop. Why? Because ultimately it is the Mystical Body of Christ they want crucified on their new cross of atheistic secularism,and that means they hate every last one of us.

By the way, I’m not a fan of those who would mock the religion of others. I prefer face-to-face discussions, motivated by the pursuit of goodness, truth and beauty. So I have no particular affinity for the American Freedom Defense Initiative or its leader Pamela Geller. But, honestly, if you’re in the business of tracking down haters and their affiliated groups, don’t you think the guy here in the middle might be worth keeping an eye on?

What say you to that, SPLC?

And The Remnant and the Family Research Council remain on the SPLC hate map. Go figure!

Please help us resist the vicious attacks of the SPLC

[Comment Guidelines - Click to view]
The Remnant values the comments and input of our visitors. It’s no secret, however, that trolls exist, and trolls can do a lot of damage to a brand. Therefore, our comments are heavily monitored 24/7 by Remnant moderators around the country.  They have been instructed to remove demeaning, hostile, needlessly combative, racist, Christophobic comments, and streams not related to the storyline. Multiple comments from one person under a story are also discouraged. Capitalized sentences or comments will be removed (Internet shouting).
The Remnant comments sections are not designed for frequent personal blogging, on-going debates or theological or other disputes between commenters. Please understand that we pay our writers to defend The Remnant’s editorial positions. We thus acknowledge no moral obligation whatsoever to allow anyone and everyone to try to undermine our editorial policy and create a general nuisance on our website.  Therefore, Remnant moderators reserve the right to edit or remove comments, and comments do not necessarily represent the views of The Remnant.
Last modified on Thursday, May 7, 2015