Saints in Praise of Heretics 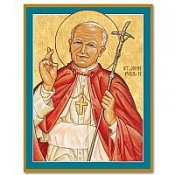 According to the Vatican's News site: "Pope Francis has appointed Cardinal Miloslav Vlk, Archbishop Emeritus of Prague, to be his special envoy to the July 5-6 events in Prague, marking the 600th anniversary of the death of John Hus (1369-1415).

“In an address to the International Symposium on John Hus in 1999, St John Paul II said the Bohemian church reformer, who was condemned of heresy and burnt at the stake, was a "memorable figure," particularly for "his moral courage in the face of adversity and death."


“Hus was born in the Kingdom of Bohemia (now Czech Republic). He was ordained a priest in 1400, and preached reformation in the Church. He was a supporter of some of John Wycliffe’s teachings and was eventually excommunicated, condemned of heresy and killed. His followers came to be known as Hussites.

“St John Paul II said ‘the effort that students can develop to reach a deeper and full understanding of historical truth was of crucial importance. Faith has nothing to fear from the commitment of historical research, since the research is also, ultimately, reaching out to the truth that has its source in God. A figure like John Hus, who was a major point of contention in the past, can now become a subject of dialogue, discussion and common study’ in the hope that decisive steps can ‘be made on the path of reconciliation and true unity in Christ,’ the late pope said.”  READ FULL ARTICLE HERE

REMNANT COMMENT: What fun!  One wonders if there are any other cases in history where canonized saints came out in unapologetic praise of condemned heretics. Or is this just another advance of the Church of Vatican II?

And consider the rich irony at work here: We traditional Catholics are told that we must "accept Vatican II" (whatever that means), never question it, and never even hint at a criticism of the Pope. And yet here we have SAINT John Paul praising a condemned heretic who the Pope (Gregory) personally ordered imprisoned for heresy.  And, of course, John Hus was finally condemned by a Council of the Catholic Church—the Council of Constance, on July 6, 1415.

Conclusion? Stupid Council, pope was wrong--something that surely, one day, the Church will say of the disasterous revolution of Vatican II, as well.

The Anglicans have long considered Hus a martyr and a saint, of course.  And for that matter, Hus was certainly more Catholic than Cardinal Walter Kasper. At least Hus insisted that the Church could distribute the consecrated hosts at Mass only to Catholics in good standing—something Pope Francis is considering overturning next October.  Anyway, the Anglicans have evidently won over the Popes of Rome where the old heretics are concerned.

Will John Hus become the first canonized heretic? Perhaps, he was obviously something of a prophet. His last words were: “In 100 years, God will raise up a man whose calls for reform cannot be suppressed.” About a century later, in 1517, Martin Luther nailed his 95 Theses of Contention to the church door at Wittenberg.

With patience, time and the good ol' Spirit of Vatican II, SAINT Martin Luther could become a reality in the not too distant future, too. Wouldn’t that be special?

I wonder if even that would stir the Neo-Catholics from their slumber.  We’re already seeing that canonized saints praising heretics doesn’t bother them in the least. So why would heretics becoming saints present a problem? Only rad trads like St. Thomas More and St. John Fisher would object to that! And, hey, they’re dead.

Welcome to the Twilight Zone.

[Comment Guidelines - Click to view]
The Remnant values the comments and input of our visitors. It’s no secret, however, that trolls exist, and trolls can do a lot of damage to a brand. Therefore, our comments are heavily monitored 24/7 by Remnant moderators around the country.  They have been instructed to remove demeaning, hostile, needlessly combative, racist, Christophobic comments, and streams not related to the storyline. Multiple comments from one person under a story are also discouraged. Capitalized sentences or comments will be removed (Internet shouting).
The Remnant comments sections are not designed for frequent personal blogging, on-going debates or theological or other disputes between commenters. Please understand that we pay our writers to defend The Remnant’s editorial positions. We thus acknowledge no moral obligation whatsoever to allow anyone and everyone to try to undermine our editorial policy and create a general nuisance on our website.  Therefore, Remnant moderators reserve the right to edit or remove comments, and comments do not necessarily represent the views of The Remnant.
back to top
Last modified on Monday, May 4, 2015
Tweet

More in this category: « Another Papal Scolding Pope Francis: Heretics Can Be Saints? »