A Sincere Question for Mrs. Bogle & the Catholic Herald 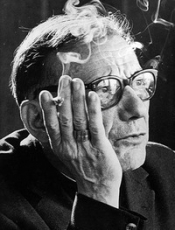 Cardinal Jean Daniélou, S.J.
In her April 9, 2015 column, "The holy cardinal who died in a prostitute’s home" Joanna Bogle offers a spirited defense of Cardinal Jean Daniélou, the famous progressive who, according to Bogle, was largely maligned and misunderstood.  Fair enough!  I hope Mrs. Bogle is absolutely spot on about that, for the sake of the man's soul if nothing else.

But I have an honest question for Mrs. Bogle who, being a very busy woman, may or may not have time to answer. So, I will put it to readers of The Remnant.  In the penultimate paragraph of her article, Mrs. Bogle writes:  "Today, the truth is known and Daniélou is beginning to be honoured as he should be. I am rather proud to have been a part of the group that stood by him, even when his reputation was unjustly tarnished. I’m discovering with joy his earlier writings, and being nourished by them. The post-Vatican II chaos gave way to happier times, with St John Paul the Great paving the way for a new era."


And now to my question: In what sense can it be understood that the "post-Vatican II chaos" has given way to "happier times", with Pope John Paul having "paved the way for a new era"?  What can this mean? I'm quite serious. I really want to know. What are Mrs. Bogle, the Catholic Herald, and so many other well-meaning conservative Catholics today seeing in our Church racked with scandal and apostasy, as well as mass defection from the Sacraments, that could possibly translate into "happier times" and the dawning of a "new era"?

WHAT IS IT? What new era? What about the massive clerical sex scandal that makes the circumstances of Danielou’s unfortunate demise appear positively tame by comparison (after all, at least he died in the company of a woman!). And the best defense of which I can think against the charge of the late Cardinal’s modernism is that in comparison to the modernism espoused by Pope Francis, Danielou was Archbishop Marcel Lefebvre.

I’m anxious to see what these fellow Catholics are seeing. I want the blindfold removed from my eyes so that I too can appreciate this “new era” and join the celebration of these “happier times”. God help me, I’m trying to raise children in the Church John Paul the Great left us, and it must be said that parents must become the Catholic equivalents of Navy Seals just to survive behind these enemy lives. There are virtually no nuns left, the Catholic schools are either shuttered or such dens of iniquity that home-schooling is the only option, the holy priesthood is in obvious shambles, and the Mass has become, as Pope Benedict put it, “totally trivialized”.

There’s a new era, alright, but it is marked by what Pope John Paul called the “silent apostasy” and Pope Benedict termed the “dictatorship of relativism.”

What, pray tell, are they talking about?  Can someone help me out here?

[Comment Guidelines - Click to view]
The Remnant values the comments and input of our visitors. It’s no secret, however, that trolls exist, and trolls can do a lot of damage to a brand. Therefore, our comments are heavily monitored 24/7 by Remnant moderators around the country.  They have been instructed to remove demeaning, hostile, needlessly combative, racist, Christophobic comments, and streams not related to the storyline. Multiple comments from one person under a story are also discouraged. Capitalized sentences or comments will be removed (Internet shouting).
The Remnant comments sections are not designed for frequent personal blogging, on-going debates or theological or other disputes between commenters. Please understand that we pay our writers to defend The Remnant’s editorial positions. We thus acknowledge no moral obligation whatsoever to allow anyone and everyone to try to undermine our editorial policy and create a general nuisance on our website.  Therefore, Remnant moderators reserve the right to edit or remove comments, and comments do not necessarily represent the views of The Remnant.
back to top
Last modified on Friday, April 10, 2015
Tweet

More in this category: « The Wall Street Journal on Vatican II and Pope Francis The First Latin Holy Triduum in the Archdiocese of New Orleans »