The Wall Street Journal on Vatican II and Pope Francis 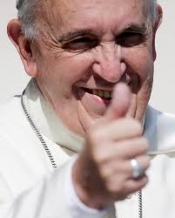 From The Wall Street Journal's Article "Pope Francis and the New Rome":  "The most radical part of Francis’ papacy is his embrace of the liberalizing principles of Vatican II—from poverty and sexual ethics to church governance.

"Francis has argued that the church’s troubles reflect not recklessness but timidity in interpreting and applying the principles of Vatican II, especially the council’s call for the church to open itself to the modern world.

"The changes [of Vatican II] were dramatic. Rome absolved the Jewish people of collective guilt for the death of Jesus Christ and declared that God’s covenant with them had never been abrogated. Catholics began to hear Orthodox and Protestants described as “separated brethren,” while church leaders spoke of a “fellowship” with non-Christians.


"The years following the council brought cultural change to the church, blurring many aspects of Catholic identity. Women ceased to wear veils in church, and Catholics started eating meat on Fridays. Nuns moved from convents to apartments. Interfaith marriage ceased to be taboo. Priests moved from hearing confessions in darkened booths to more conversational settings.

"At the same time, the church in Europe and the U.S. saw a steep decline in attendance at Mass and in adherence to traditional morality, with the sexual revolution and the spread of contraception and legalized abortion. A half-century after the council, the population of nuns in the U.S. has declined by more than 70% and the annual number of priestly ordinations by 50%." READ FULL WSJ ARTICLE HERE

REMNANT COMMENT: So, Pope Francis wants more of this insanity! Why is it that the everyone in the whole world today, even columnists for the Wall Street Journal, can see exactly what's really going on here, what is wrong with Vatican II, and what Pope Francis is all about--except for our friends the neo-Catholics who insist on celebrating the ongoing auto-demolition of the Catholic Church?   I can understand if we were still in the reign of John Paul ‘the Great’ and it required foresight to see what was really going on.  But now foresight isn't required at all. All you have to do is survey the bombed out ruins of our once mighty Catholic Church and use a little 20/20 hindsight to understand precisely what happened. So what explains the blindness of our brothers and sisters on the neo-Catholic side of the aisle?

[Comment Guidelines - Click to view]
The Remnant values the comments and input of our visitors. It’s no secret, however, that trolls exist, and trolls can do a lot of damage to a brand. Therefore, our comments are heavily monitored 24/7 by Remnant moderators around the country.  They have been instructed to remove demeaning, hostile, needlessly combative, racist, Christophobic comments, and streams not related to the storyline. Multiple comments from one person under a story are also discouraged. Capitalized sentences or comments will be removed (Internet shouting).
The Remnant comments sections are not designed for frequent personal blogging, on-going debates or theological or other disputes between commenters. Please understand that we pay our writers to defend The Remnant’s editorial positions. We thus acknowledge no moral obligation whatsoever to allow anyone and everyone to try to undermine our editorial policy and create a general nuisance on our website.  Therefore, Remnant moderators reserve the right to edit or remove comments, and comments do not necessarily represent the views of The Remnant.
back to top
Last modified on Sunday, April 5, 2015
Tweet

More in this category: « A Holy Saturday Sermon that will Make You Long for Heaven A Sincere Question for Mrs. Bogle & the Catholic Herald »