The Singing Nuns--Before and After Vatican II 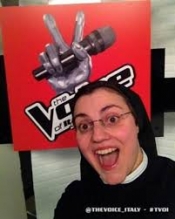 It’s not often, but once in a while you might hear on the radio the 1963 billboard chart song “Dominique” by the guitar-strumming Singing Nun. The catchy melody and simple French lyrics about St. Dominic are still enchanting. Then the disaster of Soeur Sourire’s life comes to mind, finalized by a lesbian-suicide tryst. A quaint song marred in tragedy, so shuttering, you change the station to avoid the painful memory.

Don’t worry though, the lesson of the original Singing Nun has been forgotten. For now we have another “singing nun”, but not one that serenely strums a guitar like Sister Smile. No, we’re talking about Suor Cristina who dances on the Voice of Italy television stage while singing such 80’s songs as “Girls Just Want to Have Fun” and from the movie Flashdance, “What a Feeling!”.

Can you just imagine the religious dance moves that complement the Flashdance song! If you’re having trouble, see the video below. The video of her performance is complete with dancing “monks” who shortly shed their habits …and modesty. But her fellow Ursuline Nuns just loved it; you can watch them jumping up and down wildly from the sideline. Disclaimer: if you have any Catholic sensibility you might want to have an airline sickness bag nearby.

But it gets worse: she’s also publicly sung “I've Had the Time of My Life” and the infamous Madonna cover, “Like a Virgin”. Is it possible that Sister Cristina is so naïve that she confuses the implied sexual references in these songs with her chaste life as a bride of Christ?

Even during her Voice of Italy audition, Sister Cristina allowed J-Ax, the tattooed rapper voice coach, to pick her up and spun her around in an embrace, to the delight of her fellow Ursulines! Whatever happened to the “hands-off” approach to a Nun?

At this point I’m asking myself, “Where the heck is the Blues Brothers’ Mother Superior Penguin when you need her?” At least she would have pulled out her yardstick and… uh, never mind, you can’t do that on public television any more.

But couldn’t the Vatican at least do something about this affair? After all, it’s taking place in Italy… Never mind (again), I just remembered that Pope Francis had the punk rocker Patti Smith over for an “O Holy Night” of a Christmas concert! And don’t forget she considers a real deviant wacko to be one of the most influential persons in her life, not the Divine Babe in the manger.

Oh and I just remembered, Sister Cristina, or “Sister-Ax” as she has been rebranded, claims that it was Pope Francis who inspired her to audition for The Voice so she could “evangelize”. Who and how, I’m not sure, but she did use proper New-Evangelizationesqe.

So a sigh of relief: Sister Christina’s performances must be okay and I’m just overreacting. But still, I would rather watch the surreal 1982 disco-tech video of “Dominique” with the Singing Nun’s voiceover instead.

Published in Fetzen Fliegen
back to top
Last modified on Friday, January 16, 2015
Tweet
More in this category: « Charlie and the Tunnel of Madness Scary Kerry Is There For US »