Written by  Christopher A. Ferrara
Rate this item
(56 votes) 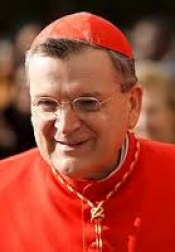 The Rise of Know-Nothing “Catholic” Journalism

As events make clearer by the day, Pope Francis is attempting to do at the level of the universal Church what he did as rector of the Jesuits in Argentina: impose his idiosyncratic Latin American vision of the Faith, combining dogma-free popular piety with radical progressivism—the latter undermining the former as we see with the mass defections from the Church in Argentina and throughout Latin America.

Only this explains a Pope who tells the common people to be on guard against the deceptions of the Devil at the same time he affirms atheists, Protestants, Jews, Muslims, divorced and “remarried” Catholics and even hypothetical “gay persons” who “seek God” in their respective spiritual conditions as if there were neither a Devil to deceive them nor a Hell to punish sin. Only this explains how one and the same Pope can declare in a homily that “every Christian is called in every circumstance to live a life that is coherent with the faith he or she professes” while arguing that public adulterers should be allowed to be godparents and that their admission to Holy Communion, without renouncing their adulterous relations, is a subject worthy of serious discussion in the Church—exactly contrary to the explicit teaching of John Paul II in a landmark encyclical on marriage and family only 33 years ago.

As we see the truths of our religion being obscured by the confusion and maddening self-contradictions of the Bergoglian personality cult, we see also the rise of a kind of Know-Nothing “Catholic” journalism that assists in this eclipse of the Faith by demonizing anyone of any prominence who dares to bring up such trivial matters as Catholic doctrine and discipline, liturgical tradition, or the crisis in the Church resulting precisely from the widespread corruption of doctrine, discipline and liturgy. Not even cardinals and bishops are exempt from the paradox of the emerging virulent anti-Catholicism of certain “mainstream” Catholic journals, another result of the “Francis effect.”

Crux magazine exemplifies this development with its recent hatchet job on Cardinal Raymond Burke. The good Cardinal is one of the few prelates in the Western church who is publicly defending the truths of the Faith against Francis’s thematic denunciation of “rigid” Catholics who decline to follow the God of Surprises he introduced to the Church on the very day he published to the world a document purporting to be the 2014 Synod’s midterm report, which the Synod itself never approved or even saw beforehand! You remember: the document that calls for the admission of divorced and “remarried” Catholics to Holy Communion on a “case-by-case basis” and for “welcoming” and “valuing” the “orientation” of homosexuals. Surprise!

Crux wants everyone to despise Cardinal Burke because he declines to get with the party line of Chairman Bergoglio, as opposed to the will of the Vicar of Christ teaching and governing in the traditional manner, for which publications like Crux have no regard whatsoever. In Pope Francis Crux sees the longed-awaited Big Bertha that will blast into smithereens whatever remains of Tradition after fifty years of glorious renewal. Suddenly, therefore, everyone must obey whatever the Pope says and think whatever he thinks, which is so much more important than mere Catholicism.

Hence the article begins by noting that the Cardinal “who has been one of the most outspoken critics of Pope Francis’ push for reform, is roiling the waters yet again…” What is meant by “push for reform”? You know, reform. Whatever Francis wants. Just shut up and let it happen. There must be no roiling of the waters in FrancisChurch! The Age of the Roiling Waters has ended now that we have finally arrived, so Crux imagines, at the destination envisioned by Vatican II: the safe harbor of Perfect and Perpetual Progress where there is no longer any place for the waves of dissent that were always the exclusive prerogative of Modernists anyway.

But how exactly is the evil Cardinal Burke roiling the waters this time? By “arguing that the Catholic Church has become too ‘feminized.’” Yes, the Cardinal has dared to observe the obvious in one of the hard-hitting interviews he has given since the First Merciful Pope brutally demoted him and exiled him to a ceremonial post with the Knights of Malta. That the Church since Vatican II has undergone a process of “feminization” among the priesthood and in the liturgy, as Cardinal Burke notes, is something anyone who has not been in a coma for the past fifty years can see for himself.

Crux is also deeply offended by Cardinal Burke’s outrageous claim that priests who molest young boys and men are “feminized and confused about their own sexual identity.” Doesn’t the Cardinal know that “[r]esearchers have disputed that claim, and experts note that the reported rise in the number of gay men entering the priesthood since the 1980s coincided with a sharp drop-off in abuse cases”? Well, if “researchers” and “experts” have spoken—and what does it matter who these people are?—how can any mere Cardinal be taken seriously when he suggests that priests who sexually abuse males are feminized men, confused about their sexual identity? And how can any reasonable member of FrancisChurch possibly maintain that sodomy perpetrated by priests on youthful victims has anything to do with “gay men”? I mean, really, just who is this Cardinal fellow to judge?

Crux’s attack on Cardinal Burke does not merit serious analysis. It serves merely as an example of this curious new intra-Church Know-Nothingism that seeks to incite fear and loathing of Catholics simply because they are Catholics as opposed to mindless followers of the media’s beloved Super-Pope, a/k/a The Great Reformer. Suffice it to note the scurrilous final paragraph of the piece:

Burke, a liturgical traditionalist as well as a doctrinal conservative who is renowned for wearing elaborate silk and lace vestments while celebrating Mass, also said that “men need to dress and act like men in a way that is respectful to themselves, to women, and to children.”

So the author of this hit piece, one David Gibson, is sleazy enough to stoop the catty remark that Cardinal Burke can hardly complain about the feminization of the Church when he wears silk and lace vestments—the same vestments worn by canonized Popes and priests, including Saint Padre Pio. With exquisite irony, Gibson confirms Cardinal Burke’s contention by resorting to the rhetorical tactic of a girly-man. But progressivist organs like Crux see it as their mission to ridicule and marginalize the Cardinal by any means necessary, along with every other traditional Catholic, because in the Glorious Age of Francis there is to be no toleration of anyone who is “a liturgical traditionalist as well as a doctrinal conservative.”

In short, as Crux would have it, under the reign of The Great Reformer the only people not welcome in the Catholic Church today are orthodox Catholics. In less than two years of Francis the situation has become just about that absurd. Indeed, as Francis himself suggests almost daily, with all the subtlety of someone beating a bass drum with a wooden mallet, Catholics intent on maintaining sound orthodoxy and orthopraxis are latter-day Pharisees and “legalists” whose “supposed soundness of doctrine or discipline leads… to a narcissistic and authoritarian elitism…” These “rigorists,” said Francis only days ago, are “religious narcissists” with “hardened hearts… who barricade themselves behind the laws and rules, as though inside a prison, to feel safer and follow these rules to the letter…”

Boo hiss, says Crux, following the Chairman’s lead in heaping opprobrium on these execrable non-persons, including Cardinal Burke. Belittling “Cardinal Burke and his discontents,” John Allen writes in the same venue that Francis, having been met with “resistance” from those uppity doctrinal and liturgical conservatives—i.e., Catholics—is “cracking a head or two to remind people who’s in charge.” After all, as another Chairman once observed about how to deal with “resistance,” to make an omelet you have to break eggs.

I will leave the readers with this image of His Excellency Mvé Engone, Bishop of the Diocese of Libreville in Gabon, a prelate manly enough to wear “elaborate silk and lace vestments” because he recognizes that the sacred priesthood, like the papacy, is not about the one who holds the office but about the divine King he represents, and that the solemn liturgy is about the regality of the Kingdom of Heaven, not the vulgar populism and worldliness that afflict the priesthood of the Church of Today, whose vestment is a polyester gown. 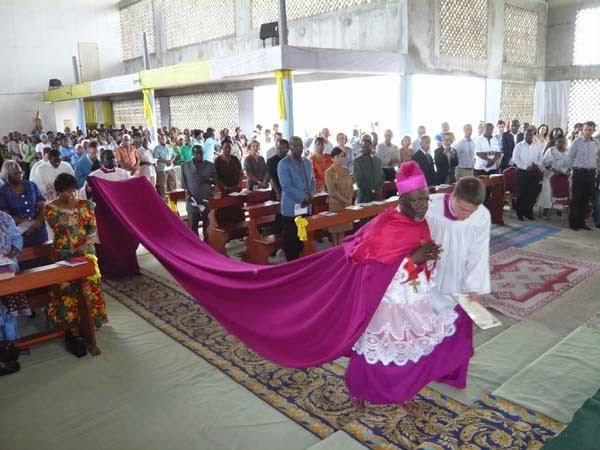 Published in Fetzen Fliegen
back to top
Last modified on Monday, January 12, 2015
Tweet

More in this category: « Mark Shea’s Head Explodes Charlie and the Tunnel of Madness »