LUTHER & HIS PROGENY (A New Book from Angelico Press) 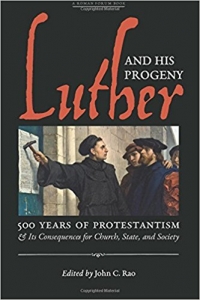 -- With essays from John Rao, Chris Ferrara, Brian McCall, and eight others, Luther and His Progeny is a major contribution toward understanding the full import of the Protestant revolt.

In October 2016, in Lund, Sweden, Pope Francis met with Lutheran church leaders to inaugurate a year of commemoration of the 500th anniversary of the posting of Martin Luther's 95 Theses in 1517, the first salvo in his rebellion against the Catholic Church. What was the nature of that revolution of half a millennium ago? Upon what new trajectory did it launch human history? What were its hidden consequences? And why does Pope Francis's proposed rapprochement of Catholic and Lutheran churches matter?

In the twelve essays contained in this volume--based upon lectures delivered at the 2016 Roman Forum Summer Symposium on Lake Garda, Italy--the authors assess the impact of Luther's novel theological and philosophical doctrines on faith, political theory, law, ethics, economics, and science--as well as his role in the devastation of Christendom and the creation in its place of the contemporary secular culture of the West. Acknowledging that the Reformation is not "the sole cause of the social problems of modernity"but rather "one major cause in a chain of causes," the authors nevertheless make it abundantly clear that there is "nothing about Luther and his Protestant rebellion that we should celebrate." Luther and His Progeny is the best guide available for Catholics to the meaning of Luther's decisive break.

Published in Headline News Articles
[Comment Guidelines - Click to view]
The Remnant values the comments and input of our visitors. It’s no secret, however, that trolls exist, and trolls can do a lot of damage to a brand. Therefore, our comments are heavily monitored 24/7 by Remnant moderators around the country.  They have been instructed to remove demeaning, hostile, needlessly combative, racist, Christophobic comments, and streams not related to the storyline. Multiple comments from one person under a story are also discouraged. Capitalized sentences or comments will be removed (Internet shouting).
The Remnant comments sections are not designed for frequent personal blogging, on-going debates or theological or other disputes between commenters. Please understand that we pay our writers to defend The Remnant’s editorial positions. We thus acknowledge no moral obligation whatsoever to allow anyone and everyone to try to undermine our editorial policy and create a general nuisance on our website.  Therefore, Remnant moderators reserve the right to edit or remove comments, and comments do not necessarily represent the views of The Remnant.
back to top
Tweet

More in this category: « No Gay Marriage for Poland Trump Overturns Obama Protection for Planned Parenthood »