Playing the Trump Card: Would It Be Any Worse? 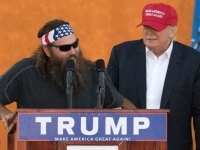 This just in from Patrick J. Buchanan: "The conservative movement is starting to look a lot like Syria.

"Baited, taunted, mocked by Fox News, Donald Trump told Roger Ailes what he could do with his Iowa debate, and marched off to host a Thursday night rally for veterans at the same time in Des Moines.

"Message: I speak for the silent majority, Roger, not you, not Megyn Kelly, not Fox News. Diss me, and I will do fine without Fox. And so the civil-sectarian war on the right widens and deepens. And two questions arise: Will the conservative movement and Republican Party unite behind Trump if he is the nominee? And will the movement and party come together if Trump is not the nominee?

"A breakdown of the balance of forces in this civil-sectarian war finds most of the media elite of the right recoiling from Trump, while Trump leads by a huge margin in Middle America.

"National Review, Commentary, The Weekly Standard, Wall Street Journal, and the conservative and neocon columnists on the op-ed pages at The Washington Post and The New York Times have almost all come out viscerally against Trump. READ COLUMN HERE

REMNANT COMMENT: Trump is who he is. No changing that. No sugar-coating it. No denying it, either. On the other hand, I think we've all had our fill of the one-party system posing as two, right? I mean, lots of folks are waking up to the game of good cop, bad cop that's been going on for so many years now. The deception, the lies, the nation building, the radical shift to the left on moral issues—all consistently facilitated by the neocons.

"Pro-life" GOP presidents with pro-abortion wives, for example, all the way back to and including Ronald Reagan. Doesn’t that just seem a wee bit too precious? Imagine if your spouse--the love of your life and mother of your children—had one “tiny” flaw: she thought it was okay to murder babies in their mother’s womb. That wouldn’t be an impediment to your happy marriage? Really?!

Don’t you see? It’s all part of the game called politics and power.  And now we have "Conservative" talk show hosts on FNC approving "gay marriage" because, well, that's what a "freedom-loving, great American" does. "So jump onboard, conservative America! We're all doing it now."

It's all so much smoke in mirrors designed to distract, misdirect and deceive good folks. But the wild popularity of Trump suggests millions of them have had enough and that the prospect of an actual change (in the sense of a disruption of the neocon globalist agenda) is becoming popular among folks who self-identify as conservatives.

So now a businessman wants to take a crack at the White House. You know what, friends? It can't be any worse than yet another politically correct careerist politician with a pro-abortion wife who'll continue to sell America out to Israel, do nothing about abortion, embrace "gay marriage" and still get to call himself a "conservative." Enough already. Let's at least take that word back!

I haven't been able to vote in good conscience for quite some time, and I doubt much will change in that regard this time around. But, please, let's not pretend that The Donald is about to derail a Christian confessional state headed up by Jebmagne, or Chris Christie the Great, or Emperor Marco of Austria. Nothing is going to change with any of these guys, and we all know it won't.

Trump’s running the American government like a business, on the other hand, may not do much for America's soul (neither do the globalist policies of the neocons) but it might just buy us some time by inadvertently disrupting our nation’s mad dash into NWO oblivion. He does, after all, have "interests" to protect, especially his own. For this guy, the White House is a step down;  so at least he may not be yet another goofball puppet.

I'm not endorsing Trump. I'm only pointing out that the two-party political system in this country has been a sham for years, and that maybe, finally, that at least will come tumbling down and voters will stop trusting faux conservatives just because they've stapled an "R" to their backsides. Let's hope the Trump phenom helps to expose the "conservative vs. liberal" shell game that's been going on for far too long.

Pat's right! With the neocons in a Trumped up scramble, at least this will be an interesting election to watch for a change.

Published in Headline News Articles
[Comment Guidelines - Click to view]
The Remnant values the comments and input of our visitors. It’s no secret, however, that trolls exist, and trolls can do a lot of damage to a brand. Therefore, our comments are heavily monitored 24/7 by Remnant moderators around the country.  They have been instructed to remove demeaning, hostile, needlessly combative, racist, Christophobic comments, and streams not related to the storyline. Multiple comments from one person under a story are also discouraged. Capitalized sentences or comments will be removed (Internet shouting).
The Remnant comments sections are not designed for frequent personal blogging, on-going debates or theological or other disputes between commenters. Please understand that we pay our writers to defend The Remnant’s editorial positions. We thus acknowledge no moral obligation whatsoever to allow anyone and everyone to try to undermine our editorial policy and create a general nuisance on our website.  Therefore, Remnant moderators reserve the right to edit or remove comments, and comments do not necessarily represent the views of The Remnant.
back to top
Last modified on Friday, January 29, 2016
Tweet

More in this category: « Remnant's Urgent Letter to Pope in Korean: 자비의희년이시작되다: 프란치스코교황님께올리는공개서한 Say Goodbye to Your Daughters: The Goddess of War Wants to Eat Them »