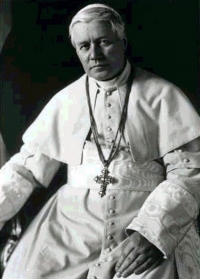 The urgent need of a saintly and courageous Pope to govern and guide the Church in the early years of the ill-fated 20th century is evident from the description of the sad condition of the times that was given by Pope St. Pius X himself in his first Encyclical, E supreme apostolatus Cathedra, in which he wrote that on ascending the Chair of Peter (1903) he was “terrified beyond all else by the disastrous state of human society today.” “Who can fail to see,” he asked, “that at the present time society is suffering more than in any past age from a terrible and radical malady which, while developing every day and gnawing into its very being, is dragging it to destruction. You understand, Venerable Brethren, that this disease is apostasy from God.”

“Truly,” he concluded, “nothing is more allied with ruin, according to the saying of the Prophet (King David): For, behold, they that go away from Thee shall perish (Ps. 72.27).”

The future “saintly and courageous” Pope, whom God was to set up to direct His Church amidst the “disastrous state of human society” and to deliver souls from the ruin of “apostasy from God”, was born on June 2, 1835, in the tiny rural village of Riese in Upper Italy, not far from the Austrian border, though actually under Austrian domination in those days. The name of God’s chosen one was Giuseppe Sarto, whose name in colloquial English would be “Joe Taylor”, for Giuseppe means “Joseph” and the family name of Sarto means “tailor”.

This saint’s father was Giovanni Battista Sarto, a shoemaker, and shoe-repair man, janitor at the parish church, and village postmaster. He died in 1852, when Giuseppe was 17. The Saint’s mother was Margarita Sarto, who lived for 42 years after her husband’s death and died in 1894, after she had seen her son (one of 10 children) become the Cardinal-Archbishop and Patriarch of Venice. The widowed mother eked out an existence for her large family by her work as a seamstress and by the products of the little family farm, which possessed one whole cow.

While Giuseppe’s father was janitor of the parish church, Giuseppe himself learned to serve Holy Mass at an early age, thus being drawn close to God Whom he was destined to serve later on in the highest position in the Church.   And he who would one day urge early First Communion for children did not himself receive his First Communion until the age of 12. At the Seminary of Padua he was an outstanding student, not only in intellectual ability, but above all in virtue and sanctity.

Giuseppe Sarto was ordained a priest of God on September 18, 1858, the year of our Lady of Lourdes. As an assistant parish priest in the town of Tombolo, he showed complete detachment of heart from material things by living like a poor man and using what money he had for the poor. His complete trust in God made him say, “Divine Providence will always find a way”, and once he quipped that “everybody wants to live on my meager income.” After only nine years as a priest, Fr. Sarto became pastor in Salzano, where he was noted for his devotion to his priestly duties.

When rumors began flying (about 1879) that he was to become a bishop, Fr. Sarto was repelled by the idea, for he greatly feared the dangers of an insatiable ambition. In the meantime, he was raised to the dignity of a cathedral canon and chancellor of the diocese of Treviso. Then, in 1884, Pope Leo XIII appointed him ­– his own future successor – the Bishop of Mantua, a large city (over 50,000 population) in Upper Italy. The diocese of Mantua was in a deplorable spiritual condition, with many of the faithful having fallen away from the Church, due largely to a neglected and negligent clergy. But Bishop Sarto undertook the task of a genuine spiritual renewal with burning zeal. In his first pastoral letter, he said: “I shall spare myself neither care nor labor nor vigils for the salvation of souls. My hope is in Christ, Who strengthens the weakest with His divine help… For the salvation of others, I must bear weariness, face dangers, suffer offences, confront storms, and fight evil. God is my hope.”

Knowing that he needed above all else a devoted and zealous clergy, Bishop Sarto revived the almost dead diocesan seminary, and for a time he personally taught dogmatic and moral theology, until he had properly trained professors to do the work. Correct and complete Catholic doctrine was all-important and he insisted that his priests preach good, solid sermons based on such doctrine. He himself gave the example, not only in teaching at the seminary, but also in preaching, hearing confessions, distributing Holy Communion, as well as in performing all the duties of a bishop.

In 1893, Pope Leo XIII created Bishop Sarto a Cardinal and appointed him Archbishop and Patriarch of Venice. During his nine years in Venice, zeal for the Faith and for the salvation of souls grew ever greater, and he continued to give top priority to proper priestly training. After twenty-five years on the Chair of Peter, Pope Leo XIII died in July of 1903. Cardinal Sarto came to Rome with a round-trip ticket bought with borrowed money. When he was jokingly told by Cardinal Matthieu, Archbishop of Paris, that he would never become Pope because he did not know French, Cardinal Sarto replied: “Deo gratias! I shall never become Pope.” Both were wrong. To his own great dismay, Cardinal Sarto was elected on the fifth ballot on August 4, 1903, and, after much resistance, accepted the honor only “as a cross”. He took the name of Pius X.

Sneak Peek: Unlike this article, most print-edition Remnant articles never appear on this website   Click here to find out how you can become a subscriber to The Remnant--America's oldest traditional Catholic newspaper. By subscribing, you also help ensure that content on this website will continue to be provided for free.

The great theme of the pontificate of Pope Pius X was “To restore all things in Christ”. To achieve this goal, the Saint insisted on proper instruction in the Faith for all Catholics, beginning especially with the children, who were to know their catechism thoroughly. His zeal for the Faith led him to condemn the monstrous heresy of Modernism – so deadly a menace to souls today – which he described as “the synthesis of all heresies, because it did not attack just one or a few of the Dogmas of the Faith, but attacked the very foundation of the entire Catholic Faith. The Martyrology for August 20 rightly calls him the “unconquerable defender of the integrity of the Faith and of the liberty of the Church, and distinguished by his zeal for the spread of the Faith.” The Prophecy of St. Malachy (12th century bishop in Ireland) gives him the very appropriate title of “Burning Flame”.

Pope Pius X decreed that children should be allowed to receive First Communion when reaching the age of reason, provided they understand at least the principal Mysteries of the Faith and can distinguish between ordinary bread and the Bread of the Eucharist. In May of 1914, the year of his death, the Holy Father had the joy of seeing 12,000 boys and girls from all the parishes of Rome receive their First Communion.   But the Saint urged frequent, even daily, Communion for all the faithful, provided they were in the state of grace and received Our Lord with the right intention, while he also explained to them that Holy Communion must not be considered merely as a reward for virtue, but especially as a remedy for human weakness.

To enhance Divine Worship, as well as to abolish abuses, Pius X instituted much needed liturgical reforms, promoted Gregorian Chant, and urged suitable active participation of the faithful in the Holy Mass. He also fostered devotion to Our Lady, in whose honor he issued a special encyclical (Ad Diem Illum) on the 50th anniversary (1904) of the proclamation of the Dogma of the Immaculate Conception, telling of her role as Mediatrix of all graces and as Co-Redemptrix – a title that he officially endorsed, though he did not proclaim it a dogma. In 1908, the Golden Jubilee Year of the Apparitions of Our Lady of Lourdes – and also his own Golden Jubilee as a priest of God – he sent a special personal delegate to Lourdes for the Jubilee celebration and he extended the Feast of Our Lady of Lourdes to the whole Catholic world.

Pope St. Pius X died on August 20, 1914 – after the beginning of World War I, which he had predicted – more of a broken heart than from physical illness, because he saw men and nations continuing to drift away from God and His law, despite all of his efforts in their behalf. He was canonized by Pope Pius XII in 1954 and his feast was assigned to September 3. The new Roman calendar gives him a so-called “memorial” on August 21.

Published in Remnant Articles
back to top
Last modified on Tuesday, July 15, 2014
Tweet

More in this category: « Neo-Catholic LIES! (Another Church Goes to Islam) Murder as Mercy »