Who Are the Real "Christian Ideologues"?

Written by  By Corrado Gnerre
Rate this item
(18 votes) 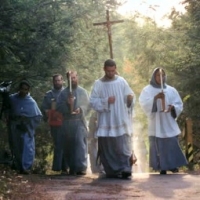 Translated for The Remnant by J. Martin

A typical error that occurs in two attitudes. The first attitude is a minority which is silent before the wreckage. They are in a sense always appreciative and – in a sense – almost hoping that the trend will continue in this vein. It is – let's face it – the attitude of those Catholics who do not have a clear conscience, with many disorders in private life. In this way they hope to silence their conscience believing that after all the wreckage proves that Catholic morality cannot be fully respected and obeyed, and that it needs to change radically.

The majority is different and their manifestation of this error is more complex. They realize that there is much that is wrong, but at the same time they strive to prove that there is not a kind of physiological crisis of the Church. The church is not sick. They think that the Church has been encrusted historically, and contaminated with power and a kind of conservatism. She must live a crisis, a crisis that will lead to greater "spiritualization" and thus be more faithful to her mandate. The arguments brought forward are obviously complex, but it remains unclear as to what is the basis of these in the attitudes of mind and soul.

If the first approach above to the question is more "low," in a sense a matter of the "belly", for the second approach it is an attitude of the "head". It is precisely an "ideological" position that prevents understanding. Ideology is a hypertrophy of intelligence that just because it is hypertrophy (too much), results in a blinding of the intelligence itself. A reality when it grows too much ends up cancelling or harming itself. Cancer is nothing more than a crazy growth of cells and a man who was too tall would not be able to live well, not easily pass through doors, would not fit easily in a car, not easily find clothes or shoes that he could wear. The ideology of intelligence is disproportionate and hypertrophied: he wants, regardless of observation, despite facys, to rely solely on his theoretical constructs and preconceived ideas.

We often hear talk from the current Pontiff against "ideological" Christians and many read this description as a reference to Christians who are accustomed to a traditional formation and who denounce a state of the Faith and of the Church which is anything but positive. Now, the definition is certainly useful because there is so much "ideological Catholicism" in our day, but we ask ourselves: who in fact has this attitude? Who should really be labeled in this way? Those who read it like it is or those who are under the illusion that things are good when they cannot possibly be good?

Many know the famous words of a well-known theorist of Soviet socialism: "If the facts do not support us, the worse for the facts!" Well, for too ​​many Catholics today, this maxim is very expressive. Faced with the obvious crisis of the Life of Grace, before the equally obvious crisis of the Church, they dare not and do not change the pastoral direction, trends and attitudes of recent decades. The problem cannot be there! We cannot go back! Yet the Faithful should hold to the wisdom of the Gospel that we recognize a tree by its fruits.

Cardinal Giacomo Biffi, retired bishop of Bologna, using his unique style in his "The Fifth Gospel" wrote about this prevalent attitude: "The kingdom of heaven is like a shepherd who, having a hundred sheep, and having lost ninety-nine, criticizes the last sheep for his lack of initiative, and drives him away, closes the fold, he goes to the tavern to discuss sheep." And to think that Biffi wrote these things back in 1969: a true prophecy.

Last Advent the Cardinal of Vienna, Bishop Schonborn, preached in the diocese of Milan and for the occasion he said, speaking of the present-day Church: "...we leave behind the nostalgia for the fifties, those of my childhood, in the village, when the church was filled with people three times every Sunday with everyone in the church. Let go the nostalgia for the vitality... of the fifties and sixties."

Here is the true "ideological" Christianity. It is one thing to say, noting the differences between the past and the present, the Catholic should not fall into depression. It is another thing to say that he should abandon nostalgia. These are Incomprehensible words. When you lose something beautiful, nostalgia is more than adequate, and it is the only attitude that is humanly reasonable.

Of course, do not get depressed, it is even more necessary to take action, to roll up your sleeves and take action, convinced that the tide of history is not in our hands but in those of God and His Blessed Mother. But such a commitment can be justified only by understanding that things are not going well now, that we must act to change them. Saying "let go of nostalgia" is the most "ideological" thing that can be said in such a situation ... unless you want to become "apostate", which we do not believe possible or conceivable. It is inconceivable in a Cardinal Prince of the Holy Roman Catholic Church.

We are afraid to see reality as it is, but this attitude is not really Christian, because the Christian is first and foremost a man of observation that makes the virtue of prudence the helm of his own judgment and of his actions.

Published in Remnant Articles
back to top
Last modified on Saturday, June 21, 2014
Tweet

More in this category: « To Believe a Lie Dietrich Von Hildebrand on Vatican II: a 'Great Misfortune' »