Sudanese Christian Preparing to Die for Her Faith 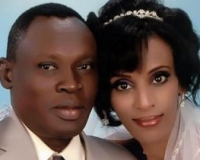 Meriam and her husband Daniel

I was wondering if you have heard the story about the 27 year old Christian woman in Sudan being persecuted for being a Christian? Her husband has dual citizenship and lives in New Hampshire and is fighting to save his wife's life. She is in prison 8 months pregnant, along with her 18 month old baby boy. As soon as she has this baby she is sentenced to 100 lashes and hanging. My hope is that since her husband is an American, something can be done.

Please let’s spread the word to pray for this dear, brave woman. As a mother of 9 children, I am just heartsick over this. We are praying to St. Philomena. Thank you, Mr. Matt. - Gwen Marbach from Pa

Indeed we have. Meriam Yehya Ibrahim Ishag is a Sudanese woman who was born to a Muslim father but was raised by her Christian mother after her father abandoned the family when she was a child. She was never a Muslim, but rather embraced the faith of her mother, an Orthodox Christian from Ethiopia.

The really powerful aspect to this story, however, is that Meriam is at this moment preparing herself for martyrdom. After marrying a Christian, Daniel Wani, a Sudanese immigrant with U.S. citizenship, Meriam was sentenced to 100 lashes for adultery since a court ruled that her marriage to a Christian violated Sudan’s Islamic law.  After her conviction, the 27-year-old was given three days to deny her Christian faith. She refused. Let me repeat that: SHE REFUSED!

She, her unborn baby and her 20-month-old son are currently in prison awaiting the execution, which is scheduled to take place sometime after Meriam gives birth to the baby.

The international community is rightfully outraged, and a great deal of pressure is being applied to force the government of Sudan to spare Meriam and her children. In the meantime, this heroic woman presents a shining example to the whole world on how to live the Christian faith…even when asked to die for it.

Remnant readers are encouraged to join the worldwide effort to save Meriam.

Published in Remnant Articles
back to top
Last modified on Thursday, May 22, 2014
Tweet

More in this category: « The Monster Crypto-Modernist Congregation for Religious Suspects Nuns of Being Catholic »