The “Hermeneutic” of Correction and Rejection: Taking Vatican II Away from the Heretics 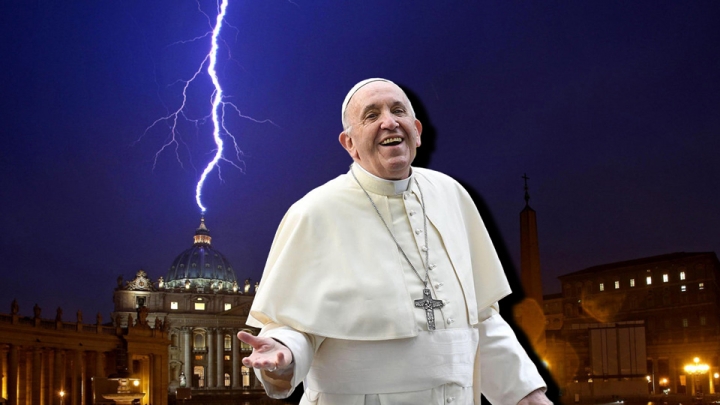 “A certain number of important theological questions about which no agreement could be reached were left open by choosing formulations that could be interpreted differently by particular groups and theological tendencies at the Council.” (Karl Rahner and Herbert Vorgrimler, as quoted in Fr. Matthias Gaudron’s The Catechism of the Crisis in the Church)

Those who have sought to destroy the Church for the past several decades have routinely used Vatican II and its “Spirit” to justify their anti-Catholic initiatives. All Traditional Catholics oppose these attacks on the Church, but we are generally handicapped in combatting them because we disagree on how to respond to the Council. As a result, rather than banding together to fight the errors animated by the Spirit of Vatican II, we sometimes fight each other about how much we can, or should, oppose the Council. This, of course, assists our common enemies in their unholy warfare.

The goal of this approach is not to preserve, defend, or promote the Council; rather the goal is to neuter the progressivist weaponization of the Council until such time as a holy pope can adequately resolve the questions about Vatican II.

Even if Traditional Catholics disagree on certain key aspects of the Council’s authority, we ought to agree that the progressive architects of Vatican II have intentionally weaponized the Council against Catholicism through the exploitation of the ambiguities described by Rahner (above), and confirmed by Fr. Edward Schillebeeckx:

“We have used ambiguous phrases during the Council and we know how we will interpret them afterwards.” (Schillebeeckx, as quoted in Archbishop Lefebvre’s Open Letter to Confused Catholics)

If ever we have another genuinely Catholic pope, he will need to guide the Church in resolving the questions surrounding the authority and meaning of the Council and its tragically flawed documents. For the time being, though, the same ambiguities in the Council that have allowed progressives to promote their anti-Catholic initiatives invite, and even require, faithful Catholics to insist on genuinely Catholic interpretations of the Council. Although certain critical passages of the Conciliar documents sound like impious nonsense, we know that insofar as Rome claims the Council is Catholic, the passages must be given a Catholic meaning. Obviously a Catholic Council must be Catholic.

At various stages, Rome has allowed for the theoretical possibility of “interpreting” the Council “in the light of tradition,” and even Archbishop Marcel Lefebvre endorsed such an approach in his March 8, 1980 letter to John Paul II:

“I am fully in agreement with the judgment that Your Holiness gave on the Second Vatican Council, on 6 November 1978, at a meeting of the Sacred College: ‘that the Council must be understood in the light of the whole of holy Tradition, and on the basis of the unvarying Magisterium of Holy Mother Church.’”

This general approach allows for various outcomes, many of which could result in an unholy mixture of truth and error. Given the fact that those drafting the Council documents intentionally included ambiguous passages that they intended to interpret in a heterodox manner, we have a right to condition our “acceptance” of the Council on it being interpreted in a way that is entirely consistent with the “unvarying Magisterium of Holy Mother Church.” Such interpretations must completely reject all error and clearly state immutable Catholic truth. This approach would not automatically rid the Church of its high-ranking enemies, but it could diminish their ability to persuade Catholics that Vatican II gives them carte blanche to destroy the Church.

As distasteful as it is for those who despise the Council, now is the time to insist that the “proper interpretation” of the Conciliar documents must be completely in keeping with Church teaching.

To illustrate the practical application of this approach to the Council, we can look at a few common points of contention:

"This is the one Church of Christ which in the Creed is professed as one, holy, catholic and apostolic, which our Saviour, after His Resurrection, commissioned Peter to shepherd, and him and the other apostles to extend and direct with authority, which He erected for all ages as ‘the pillar and mainstay of the truth.’ This Church constituted and organized in the world as a society, subsists in the Catholic Church, which is governed by the successor of Peter and by the Bishops in communion with him, although many elements of sanctification and of truth are found outside of its visible structure."

“It follows that the separated Churches and Communities as such, though we believe them to be deficient in some respects, have been by no means deprived of significance and importance in the mystery of salvation. For the Spirit of Christ has not refrained from using them as means of salvation which derive their efficacy from the very fullness of grace and truth entrusted to the Church.”

“All this holds true not only for Christians, but for all men of good will in whose hearts grace works in an unseen way. For, since Christ died for all men, and since the ultimate vocation of man is in fact one, and divine, we ought to believe that the Holy Spirit in a manner known only to God offers to every man the possibility of being associated with this paschal mystery.”

Rather than debating the meaning of these ideas, we should simply insist that there is no salvation outside the Catholic Church absent the extraordinary interventions from God that the Church has historically acknowledged.

We can apply this same methodology to every contentious passage in the Conciliar documents. It requires little creativity and no compromise — we merely identify the subject matter involved, insist on the applicable Catholic truth, and reject the corresponding error. Indeed, the Society of St. Pius X’s “Si Si No No” published a similar methodology in 2003-2004, cataloging and describing the various “Errors of Vatican II” and providing the opposing Catholic truths.

What is the purpose of such an approach? Today we see Francis and his collaborators attempting to transform the Catholic Church into the chaplaincy for the Great Reset and New World Order. These anti-Catholic innovators rely almost exclusively on Vatican II for their unholy efforts.

Unfortunately, though, the progressives have enjoyed the almost exclusive role in interpreting their ambiguous passages, which has allowed them to force us into one of two camps: either we accept Vatican II and implicitly endorse the errors they try to promote; or we reject Vatican II and they marginalize us as “schismatics.” But by making the documents intentionally ambiguous to gain the approval of the Council Fathers, they left open the theoretical possibility that faithful Catholics would eventually “accept Vatican II” and reject their anti-Catholic interpretations of it. As distasteful as it is for those who despise the Council, now is the time to insist that the “proper interpretation” of the Conciliar documents must be completely in keeping with Church teaching.

In conjunction with this insistence on the “proper interpretation” of the Council, faithful Catholics should unambiguously reject the errors which have been foisted on the Church through the progressive interpretations of the Conciliar documents. The formula for such rejections is simple: in each case, Catholics can state the immutable Catholic truth and condemn the opposing error. Even those who must, for whatever reason, “support” Vatican II can and should insist on Catholic truth and reject the errors plaguing the Church today.

This approach also accords with the words of Pius VI’s 1794 bull, Auctorem Fidei, condemning the Gallican and Jansenist acts and tendencies of the Synod of Pistoia:

“Whenever it becomes necessary to expose statements which disguise some suspected error or danger under the veil of ambiguity, one must denounce the perverse meaning under which the error opposed to Catholic truth is camouflaged.”

The progressives intentionally veiled their errors with ambiguity to gain sufficient approval from the unsuspecting Council Fathers. We, who now know how the progressives have used these ambiguous passages, have a duty to denounce the errors and firmly assert the Catholic truth. The Council Fathers never would have agreed to the overtly anti-Catholic interpretations, and we should not hesitate to denounce them today. In fact, we have a moral obligation to do so.

Would the liberal Catholics object? Of course, but in so doing they must openly acknowledge that the Council breaks with all of Catholic tradition. This approach would thus compel them to choose between (a) accepting the Catholic truth which they despise, or (b) undermining their argument that their interpretations of the Council are consistent with Church teaching.

This is why they insist that we “accept Vatican II.” If we can effectively take Vatican II away from these heretics by rejecting the anti-Catholic interpretations, we can impede their ability to hijack the Catholic Church to advance their demonic aims.

What is the purpose of such an approach? Today we see Francis and his collaborators attempting to transform the Catholic Church into the chaplaincy for the Great Reset and New World Order. These anti-Catholic innovators rely almost exclusively on Vatican II for their unholy efforts. This is why they insist that we “accept Vatican II.” If we can effectively take Vatican II away from these heretics by rejecting the anti-Catholic interpretations, we can impede their ability to hijack the Catholic Church to advance their demonic aims.

Without God’s grace, we can do nothing. But this complete dependence on God does not mean that He wants us to passively accept the demonic outrages committed against Him and His Church. We have to fight, and today it appears that the unholy interpretation of Vatican II is both the most important weapon our enemies have and the one that is most vulnerable to our counterattacks. Perhaps a holy pope will one day completely reject Vatican II, but until that happens we should do all we can to render it worthless to our enemies. Our Lady, Queen of the Most Holy Rosary, pray for us!

[Comment Guidelines - Click to view]
The Remnant values the comments and input of our visitors. It’s no secret, however, that trolls exist, and trolls can do a lot of damage to a brand. Therefore, our comments are heavily monitored 24/7 by Remnant moderators around the country.  They have been instructed to remove demeaning, hostile, needlessly combative, racist, Christophobic comments, and streams not related to the storyline. Multiple comments from one person under a story are also discouraged. Capitalized sentences or comments will be removed (Internet shouting).
The Remnant comments sections are not designed for frequent personal blogging, on-going debates or theological or other disputes between commenters. Please understand that we pay our writers to defend The Remnant’s editorial positions. We thus acknowledge no moral obligation whatsoever to allow anyone and everyone to try to undermine our editorial policy and create a general nuisance on our website.  Therefore, Remnant moderators reserve the right to edit or remove comments, and comments do not necessarily represent the views of The Remnant.
back to top
Last modified on Monday, January 23, 2023
Tweet

More in this category: « THE FORTY MARTYRS OF SEBASTE: Killed for Noncompliance in Great Reset of Their Time Allowing the Most Blessed Virgin Mary to Guide Us Through the Crisis »