Francis’s Christmas Message: We Must Convert to What the Church Has Always Rejected 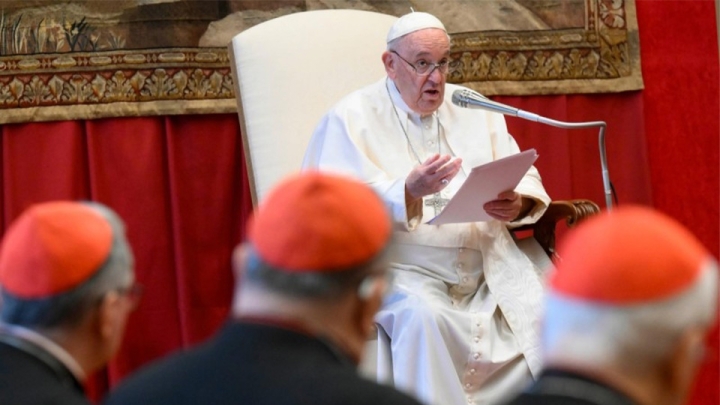 Francis gives a Christmas greeting to the Roman Curia vatican.va

"We are in greater danger than all others, because we are beset by the 'elegant demon,' who does not make a loud entrance, but comes with flowers in his hand." — Francis, 2022 Christmas Greetings to the Roman Curia

Francis’s 2022 Christmas Greetings to the Roman Curia included several elements that are genuinely Catholic, and even edifying, when read out of context. One of the dominant themes, for example, is the need for conversion:

“Conversion is a never-ending story. The worst thing that could happen to us is to think that we are no longer in need of conversion, either as individuals or as a community. To be converted is to learn ever anew how to take the Gospel message seriously and to put it into practice in our lives. It is not simply about avoiding evil but doing all the good that we can. That is what it means to be converted.”

We could find similar exhortations from some of the great saints, and surely all of the saints had this spirit of always seeking to better know, love, and serve God.

Unsurprisingly, though, Francis does not limit “conversion” to growing in holiness. He instead focuses on “conversion” primarily in terms of learning new things about the Gospel:

“Where the Gospel is concerned, we are always like children needing to learn. The illusion that we have learned everything makes us fall into spiritual pride.”

Before considering how Francis develops this theme, we can pause to decipher these two sentences. Clearly he is saying spiritual pride is bad, and we can all agree with that statement even though most of us struggle to eradicate spiritual pride from our lives. But he is also hinting at something he develops throughout his Christmas message: we cannot rely on the interpretations the Church has given to the Gospels for the past two-thousand years; we must instead reevaluate them for ourselves in light of the changing world. So, according to Francis’s completely upside down logic, it is prideful to submit to what the Church has always taught, and humble to rely on our own intellectual powers. Surely this is the type of eloquence the serpent used to deceive Eve in the Garden of Eden and the Council Fathers at Vatican II.

Francis’s version of the Gospel not only differs from what the Church has always held — it completely contradicts Church teaching in many important respects, as any rational and honest observer can easily discern.

Francis then commended Vatican II for converting the entire Church:

“This year marked the sixtieth anniversary of the opening of the Second Vatican Council. What was the Council if not a great moment of conversion for the entire Church? As Saint John XXIII observed: ‘The Gospel does not change; it is we who begin to understand it more fully.’ The conversion that the Council sparked was an effort to understand the Gospel more fully and to make it relevant, living and effective in our time.”

Here Francis reminds us how indispensable Vatican II is to his and the globalists’ agenda. Vatican II, he claims, made the Gospel more “relevant, living, and effective in our time,” by which he means that the Council gave the progressives the support they needed to implement initiatives that undermined what the Church has aways taught.

Francis’s reliance on John XXIII highlights a sophistry which is key to the entire assault on Catholicism: “The Gospel does not change; it is we who begin to understand it more fully.” Francis already told us that it is “spiritual pride” to dispute this, but his Christmas message did not explain how this support for the “conversion of Catholicism” fits with St. Pius X’s Oath Against Modernism:

“I sincerely hold that the doctrine of faith was handed down to us from the apostles through the orthodox Fathers in exactly the same meaning and always in the same purport. Therefore, I entirely reject the heretical misrepresentation that dogmas evolve and change from one meaning to another different from the one which the Church held previously.”

Francis continued his Christmas message by condemning the beliefs of Catholics who do not agree with him:

“The contrary of conversion is ‘immobility,’ the secret belief that we have nothing else to learn from the Gospel. This is the error of trying to crystallize the message of Jesus in a single, perennially valid form. Instead, its form must be capable of constantly changing, so that its substance can remain constantly the same. True heresy consists not only in preaching another gospel (cf. Gal 1:9), as Saint Paul told us, but also in ceasing to translate its message into today’s languages and ways of thinking, which is precisely what the Apostle of the Gentiles did. To preserve means to keep alive and not to imprison the message of Christ.”

Francis’s sophistry here is so elegant that we might actually fall for it. Maybe we really do need the pope to translate the Gospel message to the new ways of thinking? After all, Blessed Pius IX wrote something similar:

“80. The Roman Pontiff can, and ought to, reconcile himself, and come to terms with progress, liberalism and modern civilization.- -Allocution ‘Jamdudum cernimus,’ March 18, 1861.”

Unfortunately for Francis, though, Pius IX wrote that as a condemned proposition in his 1864 Syllabus of Errors.

Those who have been fortunate enough to ignore Francis’s unholy machinations will perhaps not understand why he must insist on new interpretations of immutable Church teaching. To better understand what is at stake here, we need only consider St. Paul’s unambiguous words from his Epistle to the Romans:

“For this cause God delivered them up to shameful affections. For their women have changed the natural use into that use which is against nature. And in like manner, the men also, leaving the natural use of women, have burned in their lusts one towards another, men with men working that which is filthy, and receiving in themselves the recompense which was due to their error.” (Romans 1: 26-17)

Francis’s Christmas message: anyone who disagrees is full of spiritual pride and heresy.

This is what Francis promotes through his great public support for Fr. James Martin. This is what we see from the recent scandalous announcement of the 50 Italian homosexual priests. And St. Paul says that God will condemn not only these sinners but those who consent to their sins:

“Who, having known the justice of God, did not understand that they who do such things are worthy of death; and not only they that do them, but they also that consent to them that do them” (Romans 1: 32)

The globalists and Lavender Mafia cannot tolerate those who tolerate what St. Paul wrote. And thus we must be “converted,” so that we are enlightened enough to realize that St. Paul’s words means the exact opposite today. Francis’s Christmas message: anyone who disagrees is full of spiritual pride and heresy.

Thankfully for Francis, the Synod on Synodality provides the mechanism for converting those who can be converted and banishing those stubborn Traditionalists who will not:

“As had happened many other times in the Church’s history, so too in our own time, we felt called, as a community of believers, to conversion. This process is far from complete. Our current reflection on the Church’s synodality is the fruit of our conviction that the process of understanding Christ’s message never ends, but constantly challenges us.”

Francis and the globalists will not be satisfied until they do as much as they can to destroy the Catholic religion, and the Synod on Synodality is one of their most potent weapons today.

Of course this is all tremendously distressing, but God allows it for the good of souls who love Him and want to do His will. When we see how completely evil and brazen the villains have become, we see the work of Satan. And when we see that Satan and these villains so viciously attack what the Church has always taught, we have more reason than ever to attach ourselves to true Catholicism. In much the same way that Herod’s slaughter of the innocents showed how important the Divine Infant was, Francis’s attacks on Traditional Catholicism shows us how vital the immutable Catholic Faith is today.

Francis’s elegant defense of fiendish lies — in his Christmas message no less — is a sign that he knows that faithful Catholics have rejected his agenda. We should pray for Francis’s conversion, but we can have no part with his anti-Catholic, globalist wickedness. May God give us all the grace to always remain faithful to His Church as Francis and the globalists try to destroy it. God wins in the end, and it is a great honor to do all we can to fight for His glory and the salvation of souls. Blessed Virgin Mary, destroyer of all heresies, pray for us!

[Comment Guidelines - Click to view]
The Remnant values the comments and input of our visitors. It’s no secret, however, that trolls exist, and trolls can do a lot of damage to a brand. Therefore, our comments are heavily monitored 24/7 by Remnant moderators around the country.  They have been instructed to remove demeaning, hostile, needlessly combative, racist, Christophobic comments, and streams not related to the storyline. Multiple comments from one person under a story are also discouraged. Capitalized sentences or comments will be removed (Internet shouting).
The Remnant comments sections are not designed for frequent personal blogging, on-going debates or theological or other disputes between commenters. Please understand that we pay our writers to defend The Remnant’s editorial positions. We thus acknowledge no moral obligation whatsoever to allow anyone and everyone to try to undermine our editorial policy and create a general nuisance on our website.  Therefore, Remnant moderators reserve the right to edit or remove comments, and comments do not necessarily represent the views of The Remnant.
back to top
Last modified on Wednesday, December 28, 2022
Tweet

More in this category: « Do Catholics Really Worship the Virgin Mary? IT’S THE MASS THAT MATTERS: A Study in Faithful Resistance »