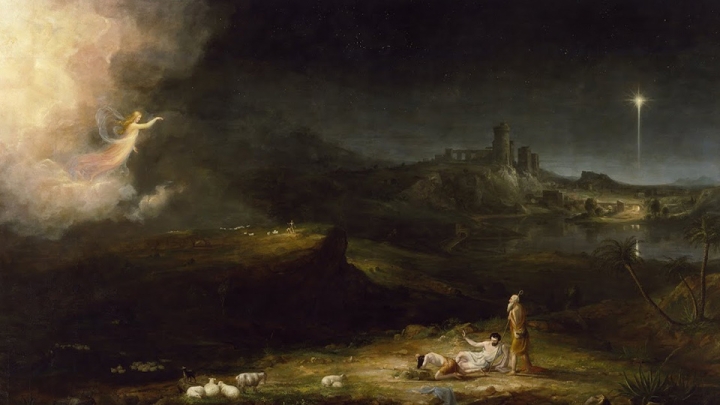 “And the angel said to them: Fear not; for, behold, I bring you good tidings of great joy that shall be to all the people. For this day is born to you a Savior, who is Christ the Lord, in the city of David.” (Luke 2: 10-11)

The angel announced “good tidings of great joy that shall be to all the people,” and yet the angels ended their heavenly message with reference to a narrower subset of people to whom the blessings of peace would apply:

In his commentary on this line, Cornelius a Lapide provided the following:

“Peace be to men, and yet not to all men, but to those that are of good will. . . Bede says, ‘those who receive Christ.’”

All men can benefit from these glad tidings of great joy, but to do so they must “receive Christ.” Because Jesus established the Catholic Church to teach and guide all people to honor God and save their souls, the Church has always had a responsibility to “teach the nations” as Jesus commanded (Matthew 28:19). And those who wish to honor God and save their souls must respond to this teaching by becoming faithful Catholics.

Consistent with this, Pius XII clearly stated the Church’s unique responsibility to proclaim the Christian Faith to the whole world in his 1942 Christmas message:

“[A]s the ‘Pillar and Ground of Truth’ and guardian, by the will of God and the mandate of Christ, of the natural and supernatural order, the Church cannot renounce her right to proclaim to her sons and to the whole world the unchanging basic laws, saving them from every perversion, frustration, corruption, false interpretation and error.”

If their good tidings are limited to men of good will; and if that “good will” ultimately means following what Christ taught; and if following what Christ taught means being a faithful Catholic . . . then there is an unfathomable tragedy when the hierarchy of the Church has spent the past sixty years propagating the lie that all Christian religions are paths to Heaven.

Even if we have periodically heard similar affirmations from Pius XII’s successors, this truth has generally been diluted, if not altogether nullified, by a false ecumenism that seeks unity through compromise. Thus, John XXIII signaled a new orientation in his 1958 Christmas message:

“The sadness of this painful observation does not stop, nor will it stop, we trust in God, the effort of our soul to continue the loving invitation to our dear separated brothers, who even bear the name of Christ on their foreheads, read His holy Gospel . . . they are not insensitive to the inspirations of religious piety, and of beneficent and blessing charity.”

Although one could read this as leaving room for the superiority and fullness of the Catholic Faith, it seems that the acclaimed publisher and author Frank Sheed accurately understood the intended and commonly-accepted meaning:

“I thought — and I fancy most of us thought like that until Pope John opened so many windows — that individual Protestants were good people, but not that the Church they belonged to might be a good thing. It did not occur to us of the Catholic rank and file to think that Protestant Churches were doing work which, in the present condition of the world, God wanted done, and that God would be pleased with them for doing it and give them grace to do it better. I do not think that we denied these things. They simply never occurred to us. But in a single address at Christmas, 1958, Pope John changed all that. Of these various Christian bodies he said, ‘They bear the name of Christ on their forehead.’ Nothing could be the same after those words were spoken.” (Frank Sheed, Is It the Same Church?)

Many Traditional Catholics rightly decried Francis’s September 2022 Kazakhstan suggestion that God wills non-Catholic religions, but Mr. Sheed noted (with approval) that he had taken the essentially same message regarding Christian denominations from John XXIII in 1958. We do not necessarily need to reach a verdict on how orthodox or unorthodox John XXIII’s 1958 Christmas message was because the decades that followed have confirmed that Rome has intentionally tried to build bridges with non-Catholic denominations at the expense of timeless Catholic truth.

How does this relate to the message of the angels to the shepherds? If their good tidings are limited to men of good will; and if that “good will” ultimately means following what Christ taught; and if following what Christ taught means being a faithful Catholic . . . then there is an unfathomable tragedy when the hierarchy of the Church has spent the past sixty years propagating the lie that all Christian religions are paths to Heaven.

Apologists for false ecumenism may argue that most Christian denominations lead souls to the same general theological destination on “important matters,” but that clearly is not the case.

By analogy, we can consider that the angels gave the shepherds instructions on where to find the Savior: He was in the city of David, and they would find “the infant wrapped in swaddling clothes, and laid in a manger” (Luke 2:11-12). Likewise, Christ established His Church to give souls direction on how to know, love, and serve God and find eternal salvation. The Church’s endorsement of non-Catholic religions would be like the angels telling the shepherds that they would find the Savior anywhere they looked. As practical men, the shepherds presumably would have dismissed such a message as complete nonsense, no matter how impressive the messengers.

Apologists for false ecumenism may argue that most Christian denominations lead souls to the same general theological destination on “important matters,” but that clearly is not the case. In the recently published Letters to a Protestant Friend, the late Hugo Klapproth highlighted the reality that “private interpretation of the Bible” invariably results in Christians arriving at completely different conclusions on every vital matter:

“Look wherever you wish within Protestantism, you will find in the place of a firm ‘Credo’ a Babylonian confusion of fluctuating opinions, all in dispute with one another. The four words in Scripture ‘this is my body’ had already in Bellarmine’s day been subjected to two hundred different interpretations; Osianader verified twenty divergent views on Justification, and sixteen on Original Sin — all of them supposedly based upon Holy Scripture — and this solely among those accepting the Augsburg Confession. Today, this cacophony has become considerably more diverse. There are no longer any important Biblical passages that are not interpreted by Protestant theologians and laity in a different way.”

The cacophony of Protestant viewpoints has grown louder and more vulgar in the 130 years since Hugo Klapproth wrote these words, and yet Francis and his fellow collaborators push the false ecumenism more forcefully than ever, insisting that God is with all Christian believers other than Traditional Catholics. It would be like the angels telling the shepherds they could find the Savior anywhere except in a manger in the city of David.

But if the good tidings of great joy, and peace on earth, apply only insofar as men follow the teachings of the Catholic Church established by Jesus, what should we expect if anti-Catholic infiltrators managed to convince the majority of Catholics that they no longer needed to follow those teachings? Not only would those souls forfeit the joy and peace heralded by the angels, they would also help spread the anti-Catholic lies of the infiltrators. Those who should be the light of the world would then become instrumental in spreading darkness, just as we see today.

The world desperately seeks a savior as Satan and globalists increase their power and influence. Those of us who have the inestimable blessing of the immutable Catholic Faith know we have found the source of the peace and joy heralded by the angels. We have found the Savior, and His promises are ours so long as we do His will.

When we look at the current occupants of Rome, we find purveyors of darkness whose joyless globalism promises enslavement rather than peace. So many people around the world are waking up and attempting to flee the darkness. The Catholic Faith given to us by Jesus should be shining so brightly in this darkness that all those earnestly seeking the truth could find it and enjoy the peace and joy that it offers. But how can people find the true Faith if they hear Francis and his fellow anti-Catholic infiltrators insisting that God is in all religions?

The world desperately seeks a savior as Satan and globalists increase their power and influence. Those of us who have the inestimable blessing of the immutable Catholic Faith know we have found the source of the peace and joy heralded by the angels. We have found the Savior, and His promises are ours so long as we do His will. This is surely why Satan and the globalists work so hard to attack Traditional Catholicism.

The fact that we have the Savior that the world needs so desperately should inspire us with such great gratitude that we continuously seek to draw nearer to Jesus with fidelity to all that He asks of us. Every one of the almost eight billion people alive today will realize when they die that the immutable Catholic Faith is the only path to the pearl of great price offered by Our Savior. If we strive to proclaim the true Catholic Faith and grow in holiness, we can help as many of those souls as possible find the true source of peace and joy that Mary and Joseph welcomed into the world on that cold and dark night of the first Christmas. Mary and Joseph, pray for us!  Divine Infant, have mercy on us!

[Comment Guidelines - Click to view]
The Remnant values the comments and input of our visitors. It’s no secret, however, that trolls exist, and trolls can do a lot of damage to a brand. Therefore, our comments are heavily monitored 24/7 by Remnant moderators around the country.  They have been instructed to remove demeaning, hostile, needlessly combative, racist, Christophobic comments, and streams not related to the storyline. Multiple comments from one person under a story are also discouraged. Capitalized sentences or comments will be removed (Internet shouting).
The Remnant comments sections are not designed for frequent personal blogging, on-going debates or theological or other disputes between commenters. Please understand that we pay our writers to defend The Remnant’s editorial positions. We thus acknowledge no moral obligation whatsoever to allow anyone and everyone to try to undermine our editorial policy and create a general nuisance on our website.  Therefore, Remnant moderators reserve the right to edit or remove comments, and comments do not necessarily represent the views of The Remnant.
back to top
Last modified on Wednesday, December 21, 2022
Tweet

More in this category: « Blessed Dom Marmion on Catholics, Protestants, and the Worsening Crisis in the Church Viganò’s Declaration on the Canonical Sanctions Imposed on Father Frank A. Pavone »