Blessed Dom Marmion on Catholics, Protestants, and the Worsening Crisis in the Church 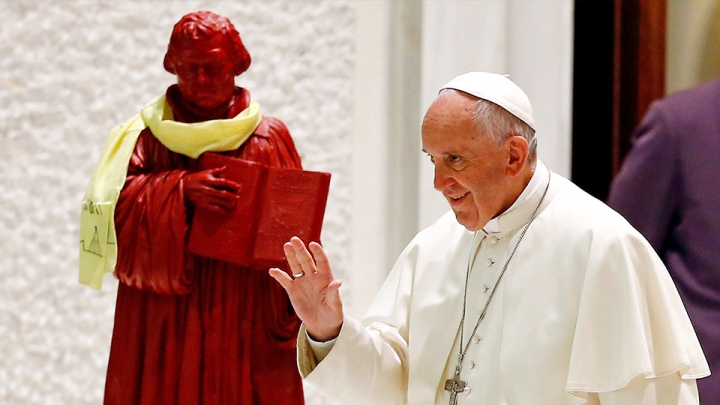 Popes Benedict XV and Pius XII praised the works of Blessed Dom Columba Marmion (1858-1923) for their holiness and wisdom, and few other writers living in the past 100 years have offered anything as spiritually nourishing as the books of the Abbot of Maredsous Abbey. His Christ: The Ideal of the Monk (1922) is no exception — his great love for God and the Faith shines forth from every page — but it is the book’s description of the differences between Catholics and Protestants that deserves particular attention in connection with the ongoing crisis in the Church. His holy wisdom shows us why we can never make peace with the Spirit of Vatican II and must vigorously oppose Francis’s Synod on Synodality.

Dom Marmion begins with a simple statement setting forth the “essence of Catholicism”:

“The Church is invested with the authority of Jesus Christ; she speaks and commands in Our Lord’s name; and the essence of Catholicism consists in the submission of the intellect to Christ’s authority exercised by the Church.”

Although we must submit to what the Church teaches, this submission depends less upon our liking of its particular teachings than upon our determination that Jesus has given the Church the authority to speak and command in His Name. Thus, as Dom Marmion explained, the most important difference between Catholics and Protestants relates to this attitude of obedience to the Church rather than acceptance of a collection of beliefs:

“It is in this that the difference lies between Protestants and Catholics. This difference indeed is not measured by the greater or lesser sum of revealed truths admitted by one or the other; certain Protestants accept materially nearly all our dogmas, and they remain Protestants to the marrow of their bones. The difference is much deeper and more radical. It practically lies in the attitude of dependence, of obedience of the intellect and the will in regard to the living authority of the Church which teaches and governs in the name of Christ the Son of God.”

All of this is undoubtedly true, and it helps us better understand the grave crisis in the Church today. Despite the malicious efforts of men like Francis, the Church still teaches the Catholic Faith and always will, but the truths of the Faith are increasingly rejected by the majority of nominal Catholics. These nominal Catholics (including Francis and almost the entire hierarchy) have not only rejected clear Catholic teaching but have also abandoned the attitude of obedience to what the Church teaches. As such, Dom Marmion’s description of Catholics no longer applies to them; their religion instead resembles that of the Protestants:

“The Protestant admits such and such truth because he discovers it — or imagines himself to do so — by his personal lights. Claiming the right of private interpretation and reading the Bible according to his reason alone, he takes or leaves what he will: each one then, keeping his faculty of choosing, is his own sovereign pontiff. The Protestant admits, the Catholic believes. As soon as the Church speaks, the Catholic submits in all obedience as to Christ Himself.”

So many of today’s so-called Catholics neither “admit” nor “believe” the truths of the Faith — they “reject” them. And yet they call themselves Catholic, as though that identification has some talismanic efficacy that allows them to save their souls regardless of what they believe and do.

Jesus did not attempt to explain or qualify His announcement about the Eucharist when He saw certain listeners reject it — He instead affirmed what He had said and let them decide for themselves whether they would continue to follow Him.

But, as Dom Marmion explains so well, the Bible provides an increasingly relevant illustration how rejecting Christ’s teachings is a rejection of the salvation Christ offers:

“Recall the scene in the Gospel described by St. John in his 6th chapter. Jesus speaks to the multitude of people whom He had miraculously fed on the previous day.  He announces to them the Eucharistic Bread: Ego sum panis vivus: ‘I am the Living Bread which came down from heaven. If any man eat of this Bread, he shall live forever.’ At these words, His listeners are divided into two groups. The one begins to reason: these are the Protestants: quomodo? ‘How can this man give us His flesh to eat?’ Now how does Jesus act in the face of this reasoning? Does He give any explanation? No, He contents Himself with affirming what He has just said with more insistency. Amen, amen, dico vobis. ‘Amen, Amen, I say unto you: Except you eat the Flesh of the Son of Man, and drink His Blood, you shall not have life in you.’ Then no longer finding this ‘reasonable,’ Durus est hic sermo et quis potest eum audire, they leave Christ: Jam non cum illo ambulabant. But there is another group formed of the Apostles. In these same circumstances what is their attitude? Do these disciples understand any better? No, but having faith in Christ’s word, they remain with Him to follow His steps throughout all: Domine, ad quem ibimus? Verba vitae aeternae habes.”

Jesus did not attempt to explain or qualify His announcement about the Eucharist when He saw certain listeners reject it — He instead affirmed what He had said and let them decide for themselves whether they would continue to follow Him. By rejecting His teachings, they earned the sentence He had proclaimed: “Except you eat the Flesh of the Son of Man, and drink His Blood, you shall not have life in you.”

How could it be that the majority of those identifying as Catholics apparently no longer believe in the Real Presence of Our Lord today when the Church teaches so clearly that Jesus truly meant what He unambiguously said? As the 1969 “Ottaviani Intervention” described,  the various ways in which the Novus Ordo Missae departs from the Tridentine Mass all serve to repudiate the belief in the Real Presence:

“[A]ll these things only serve to emphasize how outrageously faith in the dogma of the Real Presence is implicitly repudiated.”

Perhaps a skeptic might have doubted this conclusion in 1969 — but we cannot deny it now, when the fruits have become so obvious. So the Church continues to teach that Our Lord is truly present in the Blessed Sacrament, but the Novus Ordo Missae itself makes it extraordinarily difficult to believe.

Once one knowingly rejects a single teaching of the Church, he has adopted the Protestant approach to Christianity and ceased to believe as a Catholic. Other than Traditional Catholics, it appears that the vast majority of souls identifying as Catholic reject at least one Church teaching, whether it be on contraception, LGTBQ matters, the Real Presence, or the need for souls to belong to the Church.

The entire approach of the Synod is to reconsider the Church’s teachings and bring them in line with what the “faithful” believe. It makes Catholicism into Protestantism.

But Francis and his globalist collaborators are not content with the vast majority of nominal Catholics having abandoned the true understanding of the Faith, and so they have devised the Synod on Synodality. The entire approach of the Synod is to reconsider the Church’s teachings and bring them in line with what the “faithful” believe. Even if the end result of the Synod was a complete reaffirmation of authentic Catholic teaching, the entire process transforms the religion from one of “believing because the Church has faithfully transmitted the teachings of Christ” to one of “accepting because the Church presents a collection of beliefs the faithful can accept today.” It makes Catholicism into Protestantism. 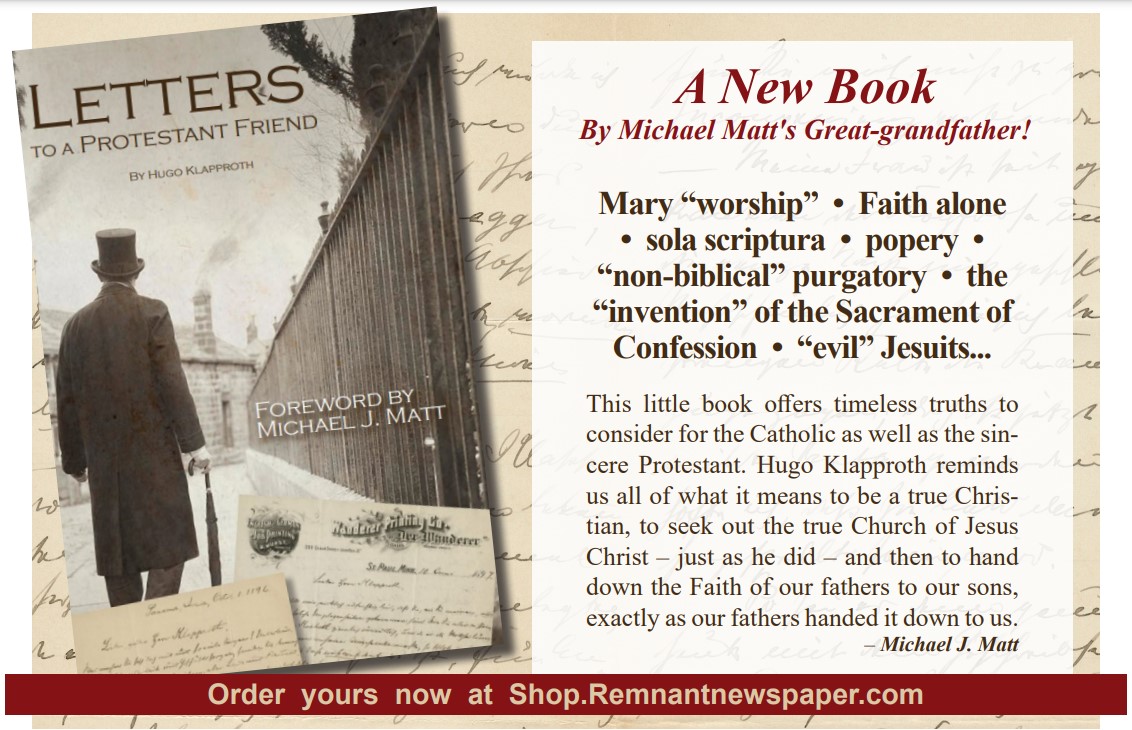 For this and other reasons, many of us have understandably grown impatient with Francis’s scandals. But it seems that the majority of the damage is already caused as soon as the Church’s shepherds promote the Protestantization of Catholics, and that has been taking place for several decades. We protest that today’s cafeteria Catholics (such as Pelosi, Biden, Fr. James Martin, etc.) put together the most unwholesome and nauseating misrepresentations of the Faith, but Paul VI and John Paul II were the ones who institutionalized the à la carte model of believing. The remedy to the crisis does not consist in cleaning up the menu of beliefs available for Catholics but in returning to the true Faith, where Catholics believe all of the Church’s actual teachings. As Dom Marmion wrote, this is what saves souls:

“Such is the attitude that procures salvation: to listen to Christ, to listen to the Church, to accept her doctrine and submit oneself to what she directs: who despises her, despises Christ. This is why Protestants do not belong to Christ’s flock; these sheep obey themselves, they follow their own personal caprices, and do not hear the Shepherd’s voice. Thus Christ does not recognize them: Non estis ex ovibus meis.”

It would not be incorrect or unfair to substitute “nominal Catholics” for “Protestants” here and throughout Dom Marmion’s discussion of the difference between Catholics and Protestants. “They obey themselves, they obey their own personal caprices.” And, of course, the Modernist infiltrators who have pushed for the unity of all Christian religions applaud the fact that so many (perhaps most) Novus Ordo Catholics have become “Protestants with a pope.” Perhaps for this reason, the 2014 abridged version of Dom Marmion’s Christ: The Ideal of the Monk no longer has this discussion of the difference between Protestants and Catholics. It has been “updated and abridged for the twenty-first century” — a century of mass apostasy.

Thanks be to God, though, we do not have to follow the false shepherds. We have the examples of the Blessed Virgin Mary and all the saints, and God will give us the grace to follow their lead while the false shepherds lead Protestantized Catholics to perdition. May the Blessed Virgin Mary help us to always remain faithful and obedient to Her Son. Immaculate Heart of Mary, pray for us!

[Comment Guidelines - Click to view]
The Remnant values the comments and input of our visitors. It’s no secret, however, that trolls exist, and trolls can do a lot of damage to a brand. Therefore, our comments are heavily monitored 24/7 by Remnant moderators around the country.  They have been instructed to remove demeaning, hostile, needlessly combative, racist, Christophobic comments, and streams not related to the storyline. Multiple comments from one person under a story are also discouraged. Capitalized sentences or comments will be removed (Internet shouting).
The Remnant comments sections are not designed for frequent personal blogging, on-going debates or theological or other disputes between commenters. Please understand that we pay our writers to defend The Remnant’s editorial positions. We thus acknowledge no moral obligation whatsoever to allow anyone and everyone to try to undermine our editorial policy and create a general nuisance on our website.  Therefore, Remnant moderators reserve the right to edit or remove comments, and comments do not necessarily represent the views of The Remnant.
back to top
Last modified on Monday, December 19, 2022
Tweet

More in this category: « Another Vatican Sex Scandal... just in time for Christmas Showing Gratitude for Our Savior as the World Desperately Seeks in Vain for Another »