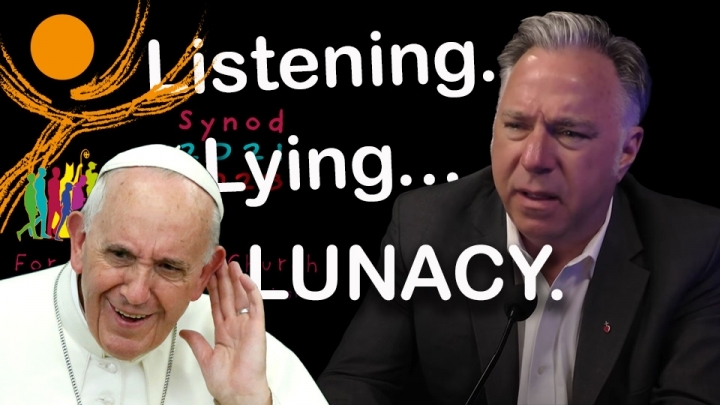 This coming weekend (Sunday at 7pm CST) down in the Remnant Underground, I will make the case that obedience to Francis can kill you...literally. But first, let's look back...

Edward Pentin reported yesterday that at Mass to mark 60 years since opening of Vatican II, Francis said that progressivism and “traditionalism — or backwardness — aren’t evidence of love, but of infidelity” and “Pelagian egoisms which put our own tastes and plans above the love that pleases God”.

Of course, every thinking person sees the rich irony in this, since it is Francis's colossal ego which puts his own tastes above everything else, including love of God. But as we proceed into the final stages of what Cardinal Muller rightly calls Francis's "hostile takeover of the Catholic Church," let's not underestimate the power of mockery.

Francis and his Crayola Synod are eminently deserving of full-throated mockery, based in what Aquinas calls "righteous wrath." I hope you'll like and share this video. It picked up a half million views when it debuted, but that's not enough. The. Synod. Must. Be. CANCELED!