Hunter Is the Good Biden 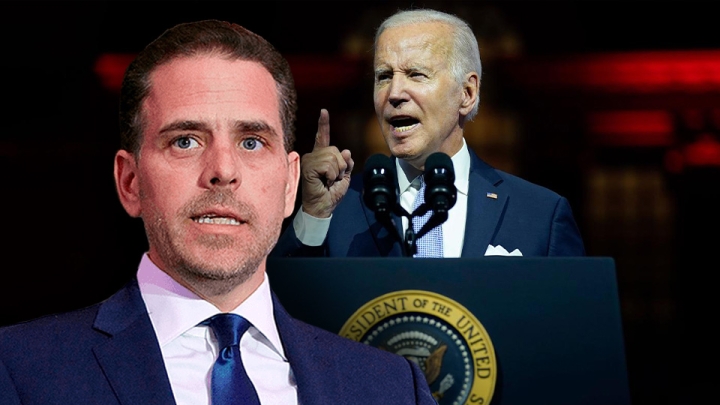 The son of the warlock who spread his talons and cast a spell from his satanic podium last Thursday.

Hunter Biden has been in the news again recently. Not for his fingerpainting this time—for a movie that has been made about his life. “My Son Hunter,” which is being distributed by Breitbart News, is set for release on September 7, 2022.

If the trailer is any indication, “My Son Hunter” will be a recreation of what it would look like if all the horrendous photos and videos on Hunter Biden’s misplaced laptops had been strung together and set within the context of political events. The churning, psychedelic plotline is disconcerting in the extreme, but the nausea one feels watching the trailer is not due to art for art’s sake but to art’s imitating life. The pathetic shallowness that is Hunter Biden, the meth teeth and prostitutes and cocaine, is not fiction in the slightest. It is who the son of the illegal occupant of 1600 Pennsylvania Avenue is throughout his every wasted day.

Joe Biden, is infinitely worse than “the smartest guy he knows,” the clearly idiotic Hunter.

Flipping through the scenes of Hunter Biden’s existence takes a strong stomach and a fortified psychological constitution. The man is debauched, depraved, disgraced, and diseased. What’s worse, he has traded access to his famous father for the sexual, financial, and narcotic favors which have been thrown his way. Hunter Biden is essentially a reverse pimp. He sells fake intimacy for money, but he’s the one who ends up getting used. And one suspects he kind of likes it. Hunter Biden is, by every measure I can think of, a disgusting human being.

But let’s not let “My Son Hunter” distract us from what’s really going on. Yes, Hunter Biden is a traitor and a lowlife. But he’s the good Biden. His father, Joe Biden, is infinitely worse than “the smartest guy he knows,” the clearly idiotic Hunter.

It’s true, for example, that Hunter Biden was on the take from bigwigs in Ukraine and China. Those payments, disguised as business transactions, were transparently in exchange for face time with “the Big Guy.” You don’t have to be Perry Mason to figure out what’s going on. Hunter sold out his country and his name for Mammon. A trial is too good for people like Hunter Biden—drumhead justice at dawn will do.

But Hunter was just the disposable middleman. The real corruption comes when “the Big Guy” gets involved. And when that happens all bets are off. Heck, long before Hunter became the poster boy problem child, his dad was “high-tech lynching” Clarence Thomas. And one can hardly blame Hunter for pop’s (not to be confused with Corn Pop) surrender to the Taliban, a ragtag force of Stone Age cave dwellers whose most potent weapon, apart from rusty Kalashnikovs from the Soviet era, would appear to be b.o. Not sure the average Talibanner is as ripe in his greasy robe as Hunter must be after a long night on the town in Beijing, but at any rate the ignominious retreat from Afghanistan was “the Big Guy’s” canvas, not Hunter’s.

Afghanistan brings into even sharper focus why Hunter is the good Biden. Joe Biden is the manager of American decline (as was his boss when he was vice-president, the highest office which Joe Biden has ever legitimately held). His task is much more complicated than was Obama’s, however. Obama—who has yet to produce a paper version of his birth certificate—had only to curtsy from afar as the People’s Republic of China came drooling and snarling (and, yes, spitting and breaking in line) onto the world stage. Biden is in a much stickier wicket. Biden has to fake-grapple with Beijing, to put on a good show before the People’s Republic of China—Biden’s owner—finally gets to clasp the brass ring and escort the Americans out of the theater. Free Wuhan virus for everyone in the audience.

There are hundreds of millions of people in Taiwan, Japan, South Korea, the Philippines, and a lot of other places (including, yes, China and even North Korea) who would prefer that a nuclear war in the western Pacific not be the price to pay for Joe Biden’s having cashed in on the American endgame.

Maybe you like the American Empire. Maybe you don’t. There are hundreds of millions of people in Taiwan, Japan, South Korea, the Philippines, and a lot of other places (including, yes, China and even North Korea) who would prefer that a nuclear war in the western Pacific not be the price to pay for Joe Biden’s having cashed in on the American endgame.

In Ukraine, too, Hunter was, again, just the self-pimping pimp who got a cut of the cash flow for doing his debasing political gigolo work. It was “the Big Guy” who bought off the Ukrainian justice department (yes, that’s an oxymoron) by leveraging American taxpayer dollars and then bragging about it in public while the cameras rolled. That was just the warmup. Biden (and by that I mean the WestExec business-casual fascists who write his speeches) is coordinating the steady expansion of the American weaponry outlet mall in a country whose political system is to the United States what a deck of cards is to a blackjack dealer in Las Vegas. Ukraine is the new Vietnam, the new Central America, a bonanza for con artists, gun-runners, drug dealers, and human traffickers—and that’s just what’s happening inside the CIA. American voters and taxpayers, most of whom seem to think Ukraine is some kind of perennial underdog sports team for which one must cheer or else be thought a heartless monster, have no idea what is going on. Some of them are watching “My Son Hunter,” though, and saying, “Ooooh, that Hunter is a bad dude.”

Absolutely true. But not just because of the whoring and the carousing. Not nearly. Hunter facilitated evils which no cinematic release could ever convey.

In early September 2022, “Dark Brandon” gave a speech, in his role as “president,” against the hellish backdrop of an uplit blood-red building barred and blocked with goth shadows. It was horrifying. “PedoHitler” was the reaction on Twitter.

Speaking of evil, there’s something else to bring up, something that will be unpopular in some quarters. Hunter Biden, on my view, is probably under the influence of evil spirits. I would not be surprised if he had sold his soul to the devil in exchange for one more hit on a bong at a party with Ukrainian gangsters (or Chinese ones—who can keep up?). But morons like Hunter Biden are a dime a dozen for Lucifer. They are roped as easily as dead steers. They are born bottom-dwellers, people who never get farther in the dark kingdom than the sex and drugs and money with which Hunter has already wasted his life.

Joe Biden is under the influence of demons, too, but he’s much higher up on the food chain. In early September 2022, “Dark Brandon” gave a speech, in his role as “president,” against the hellish backdrop of an uplit blood-red building barred and blocked with goth shadows. It was horrifying. “PedoHitler” was the reaction on Twitter. I can see what they mean. Biden is a sex fiend, yes. (But don’t expect the FBI to go raiding any archives to get the records on “the Big Guy’s” hair-sniffing and chest-rubbing.) And he’s also a power-mad racist. So no argument with “PedoHitler” on substance. But Joe Biden spreads out his talon-like arms and casts a warlock spell from the satanic podium on a country which has already sacrificed more than sixty-three million unborn children on the altar of the Democrat Party. Hitler managed only six million, and most of them were adults. Ask yourself—if you were the devil, whose work would you admire more?

As proof I offer you this: even Pope Francis loves Biden. Might as well have a certificate from the underworld written in molten sulfur.

Hunter Biden is small beer. Joe Biden is the one performing a black mass and calling it a “presidential address.”

The United States is governed by more than just the usual cabal of sociopaths. Every country is governed by one of those. The United States, under the fake “president” Joseph Robinette Biden, is barreling toward World War III—which will make even the Democrat Party’s bloodthirstiness seem tame—and is doing so under the direction of a man who is clearly an instrument of Hell itself.

Don’t believe me? As proof I offer you this: even Pope Francis loves Biden. Might as well have a certificate from the underworld written in molten sulfur.

Hunter Biden is a tattooed creep sponging off the government. So what? I knew a hundred of those in grad school. Walk through the streets of New York City to meet a thousand more. That’s not where the real problem is at.

Joe Biden is on another level of bad than his “smartest guy in the room” son.

Don’t lose sight of it: Hunter is the good Biden.

This article first appeared on SubStack and is reproduced here with permission of the author.

[Comment Guidelines - Click to view]
The Remnant values the comments and input of our visitors. It’s no secret, however, that trolls exist, and trolls can do a lot of damage to a brand. Therefore, our comments are heavily monitored 24/7 by Remnant moderators around the country.  They have been instructed to remove demeaning, hostile, needlessly combative, racist, Christophobic comments, and streams not related to the storyline. Multiple comments from one person under a story are also discouraged. Capitalized sentences or comments will be removed (Internet shouting).
The Remnant comments sections are not designed for frequent personal blogging, on-going debates or theological or other disputes between commenters. Please understand that we pay our writers to defend The Remnant’s editorial positions. We thus acknowledge no moral obligation whatsoever to allow anyone and everyone to try to undermine our editorial policy and create a general nuisance on our website.  Therefore, Remnant moderators reserve the right to edit or remove comments, and comments do not necessarily represent the views of The Remnant.
back to top
Last modified on Tuesday, September 6, 2022
Tweet

More in this category: « VATICAN SHMATICAN: Shia LaBeouf Schools Pope Francis As Biden and Bergoglio Accelerate Towards Hell, We Must Go Backwards »