From Vatican II to Pregnant Men: Bounding Down the Path of Diabolical Insanity 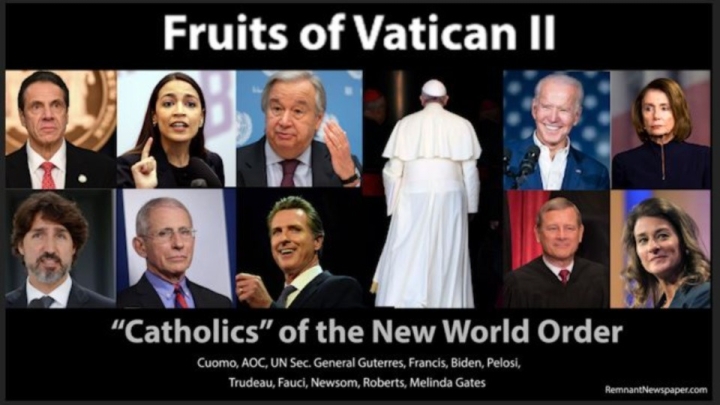 One can imagine a world in which life simply became progressively worse without also becoming increasingly absurd, but such is not the world in which we live today. Our Church and world have gotten astonishingly worse since Francis introduced us to his blasphemous Pachamama in October 2019, and every single wicked development has also involved an aspect of phenomenal absurdity. We do not necessarily hear the demons laughing uproariously, but surely they are.

Insanity did not originate with the Second Vatican Council, but there is a clear explanation for why that three year event sent the Church and world bounding down the path of diabolical insanity. We simply need to understand the implications of the fact that God entrusted the Catholic Church with preserving and disseminating His truth:

“Going, therefore, teach ye all nations: baptizing them in the name of the Father, and of the Son, and of the Holy Ghost. Teaching them to observe all things whatsoever I have commanded you.” (Matthew 28:19-20)

As has been thoroughly documented, progressive infiltrators hijacked the Council to thwart that mission in two key ways: to a large extent, the Church abandoned its efforts to convert souls to Catholicism; and it began permitting error to be taught alongside truth. One need not be Catholic to grasp the truly astounding nature of the Conciliar changes — millions of Catholics (perhaps hundreds of millions) went from thinking that one had to believe the immutable teachings of the Church to be saved, to thinking that all Christians were saved and the Church did not have a monopoly on religious truth.

Every single indicator of the Church’s health — apostasies, Mass attendance, vocations, marriages, baptisms, acceptance of Church teaching, etc. — has turned abysmal for those who accept the Council’s novelties.

This sea change set up a natural experiment: if God truly instituted the Catholic Church to safeguard and disseminate His truth, these changes should have disastrous consequences; if, on the other hand, the Church is merely a man-made organization, its efforts to accommodate its teachings to the world ought to have positive, or at least mixed, results.

The Vatican II experiment has indeed yielded conclusive results. Every single indicator of the Church’s health — apostasies, Mass attendance, vocations, marriages, baptisms, acceptance of Church teaching, etc. — has turned abysmal for those who accept the Council’s novelties. And each of these indicators have remained healthy, or has improved, for those who have instead hewed to what the Church has always taught.

Unfortunately, only a small remnant of Catholics has maintained the Church’s traditional beliefs and practices. As such, most of the Catholic and non-Catholic world experiences the effects of a Church that has apparently changed its teachings, even though the actual Church can never change in such a way. Instead of receiving God’s truth directly (for Catholics) or indirectly to a lesser degree (for non-Catholics), most people in the world have been led to believe, quite erroneously, that the Catholic Church no longer claims to possess immutable truth.

We may think this seeming abandonment of objective truth is inconsequential but imagine how it would look in the field of mathematics, where we know that 2+2=4. Through the diligence of Satan and those who infiltrated the Church on his behalf, we have seen the moral and theological equivalent of the following progression in the Church:

And so in the eyes of Francis and his sycophants, everyone is saved and worthy of respect and love; except for traditional Catholics who maintain the truths for which so many martyrs gave their lives.

Many of those who should be transmitting God’s truth to the world have abandoned the principle of non-contradiction and embraced preposterous lies about the body of beliefs they purport to hold most dearly.

When close to a billion Catholics accept this level of absurdity, the results will not be good. Many of those who should be transmitting God’s truth to the world have abandoned the principle of non-contradiction and embraced preposterous lies about the body of beliefs they purport to hold most dearly.

So, instead of Catholics who will fight to the death for immutable truth, we now have Catholics like Francis, Biden, Pelosi, Fauci, Trudeau, Cuomo and AOC. And from these stalwart champions of lunacy we have the following demonic absurdities:

Each of us could likely add several other Orwellian absurdities that would have seemed unthinkable years ago.

If we wonder why Satan and his globalists insist on pushing these insanities, we need only consider the words of World Economic Forum adviser Yuval Harari, from 2018:

“Truth and power can travel together only so far. Sooner or later they go their separate ways. If you want power, at some point you will have to spread fictions. If you want to know the truth about the world, at some point you will have to renounce power. You will have to admit things – for example about the sources of your own power – that will anger allies, dishearten followers or undermine social harmony. . . . Therefore, if you dream of a society in which truth reigns supreme and myths are ignored, you have little to expect from Homo sapiens. Better try your luck with chimps.” (from August 18, 2022 LifeSite article)

They want to dominate the world, so they have to destroy truth. They do this through giving us a steady diet of insanity, a large part of which is produced in Rome today.

The painful reality is that Vatican II emptied God’s truth from Catholic minds and Satan gladly filled the voids.

The painful reality is that Vatican II emptied God’s truth from Catholic minds and Satan gladly filled the voids. Satan’s human agents never have to explain any of these lies; they simply accuse anyone who questions them of bigotry and hate. If pressed to explain, they could offer only more fatuous lies.

Conversely, we can readily identify several reasons why the Church and world have suffered immensely from Catholic shepherds abandoning immutable truth:

Beyond these reasons, we can see that it is especially fitting that God allows the Church and world to suffer the disastrous consequences of insolently abandoning His truth.

Seen in this light, the remedy is clear: we must absolutely return to God’s truth. Back to the math analogy, we do not fix the current situation by pleading for the authorities to permit that 2+2= everything, including 4. No, we must insist, with charity, that 2+2=4, and nothing else.

While we can understand the emotional appeal of looking for compromise solutions, we have reached the point at which Satan will use them all for his advantage. Regardless of whether they are well-intentioned or “controlled opposition,” those who advocate for a gradual return to truth are like first responders who would lead children out of one burning classroom into another burning classroom. They are worse than useless because these poor souls might have found the truth if they had not been derailed by false solutions.

Those of us who know the world is almost entirely engulfed with diabolical insanity need to act like God is giving us one last chance to turn to Him as saints.

We need to recognize the insanity and help others to do the same. But once we recognize the insanity there is little benefit from simply staring into the darkness. God is allowing this diabolical insanity so that we will realize that we must turn to Him as saints. If the madness suffocating us does not alert us to the need to give everything we have to our Creator and Redeemer, what will?

It matters very little how we think this will play out in the next few months or years. Satan is calling his soldiers to battle, and God is calling His soldiers to battle. Those who try to sit this one out or compromise with the lunatics are actually volunteering to be Satan’s useful idiots, and that will not end well for them. Those of us who know the world is almost entirely engulfed with diabolical insanity need to act like God is giving us one last chance to turn to Him as saints. What do we have to lose at this point?

[Comment Guidelines - Click to view]
The Remnant values the comments and input of our visitors. It’s no secret, however, that trolls exist, and trolls can do a lot of damage to a brand. Therefore, our comments are heavily monitored 24/7 by Remnant moderators around the country.  They have been instructed to remove demeaning, hostile, needlessly combative, racist, Christophobic comments, and streams not related to the storyline. Multiple comments from one person under a story are also discouraged. Capitalized sentences or comments will be removed (Internet shouting).
The Remnant comments sections are not designed for frequent personal blogging, on-going debates or theological or other disputes between commenters. Please understand that we pay our writers to defend The Remnant’s editorial positions. We thus acknowledge no moral obligation whatsoever to allow anyone and everyone to try to undermine our editorial policy and create a general nuisance on our website.  Therefore, Remnant moderators reserve the right to edit or remove comments, and comments do not necessarily represent the views of The Remnant.
back to top
Last modified on Monday, September 5, 2022
Tweet

More in this category: « Cowardice + Prejudice = The “Hate” Business CARLO MARIA VIGANÒ to His Brother Bishops »