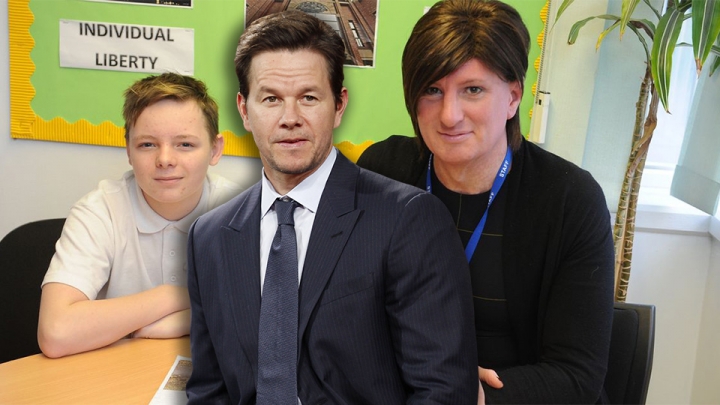 So, it struck me as odd how Wahlberg answered when, during a promotional interview on the Today show for his new Catholic-themed movie, he was asked about his children.

If Mark Wahlberg does not tutor his family in the Catholic Faith, then someone will tutor them in his own creed.

“And hopefully, instead of forcing that on them, they’ll say, ‘Well, if it works for dad, maybe it’ll work for us,’ and they’ll kind of gravitate towards it on their own.”

There is a trope one often encounters among even the faithful living in a secular milieu that religion is a personal choice, and that even parents are not permitted to teach their beliefs to their children. It would be wrong, the thinking goes, to instruct the young in a certain religion. Everyone ought to be exposed to a great ‘variety of religious experiences’ and then left to decide for him- or herself how best to structure his or her own metaphysical affairs.

To the contrary, though, it is illogical for someone who has just spent millions of dollars of his own money to make a film, presumably to portray the Catholic Faith in a positive light for a global audience, to argue that he does not want to impose his religious sensibilities on his own children.

It is morally wrong for anyone who sincerely believes that the Catholic Church is the vehicle founded by Jesus Christ for the salvation of mankind to deny his children the gifts and graces of that Church while seeking and keeping them for himself.

The fact is that children are never left without religious instruction of some kind. The secular trope is heedless wishful thinking.

And it is naïve, furthermore, to think that, if a parent does not teach his children a religion, then nobody else will, either.

The fact is that children are never left without religious instruction of some kind. The secular trope is heedless wishful thinking. If Mark Wahlberg does not tutor his family in the Catholic Faith, then someone will tutor them in his own creed. And it is very likely not going to be a belief system, in that case, that seeks the good of the child. Instead, children left uninstructed in the Catholic Faith are prey for a thousand predators, many of whom are now working with, in, and through the public schools to impose their beliefs on other people’s kids.

Over the past several years, and in particular over the past several months, American parents have been learning about the depravities and lies which public schools are pushing on children from preschool through high school. (It gets much, much worse in college—that fact somehow got through to most sensible people a while ago, although parents continued to send their children to universities, another baffling non sequitur.) From Critical Race Theory—basically Marxist revolution and race war on the installment plan—to transgenderism and the other rotten fruits in the LGBTQ basket, children are being taught “varieties of religious experience” in spades. Every time your youngster steps into a public school classroom, he or she is in the clutches of a state-paid propagandist for anti-human progressivism.

The entire edifice of the teachers’ unions (like Hamas, but with poorer spelling skills), is coming after your children.

Check out, for instance, “Mx. Beaman.” Mx. Beaman was once plain-Jane Ms. Beaman. But now she is (insert new pronoun here). And Mx. Beaman is pushing her (???) warped ideology on little kids. There are many, many “Mx. Beamans” in public schools. Each and every one of them, and the entire edifice of the teachers’ unions (like Hamas, but with poorer spelling skills), is coming after your children.

“Grooming” has entered the lexicon recently, mainly to describe how Disney executives and staffers have been sexualizing children and so preparing them to be exploited by the depraved culture which Disney peddles to America and the world. But before woke corporations came out and essentially admitted that they were brainwashing kids to be sex fiends, your local public school was pushing transgenderism, race violence, Cultural Marxism, sex-change surgeries, gay pride, anti-Christian hate, and general pandemonium on their unwitting charges.

As of this Mother’s Day, even garden variety Democrats are calling for hate crimes against Catholics—at Mass. Church vandalism and terrorist attacks are increasing. The people fomenting this terrorism are part of the same Democrat-media-“education” complex that controls what your child “learns” in public school.

(To be fair, the lunatic leading the protest outside Supreme Court Justice Brett Kavanaugh’s home, where he resides with his wife and children, is not a public school teacher. It’s even worse than that. She is a teaching assistant at an Episcopal school.)

Anti-Catholicism is the DNA of the American public school.

And please don’t forget that public schools in the United States were born bigoted. Anti-Catholicism is the DNA of the American public school.

“Father Stu” is about a man who has been around the block a time or two, a street-wise ex-fighter who apparently understands how the world works on the ground. For all that, the man behind the movie—who has spent his career in the sin-pit of Hollywood and so who ought to know of what fallen men are capable—appears to be a naïf when it comes to the upbringing of kids. Movies for the masses, but no Mass for the little ones. That is not just wrong. It’s tragically misguided.

Mark Wahlberg says he won’t instruct his children in the Catholic Faith. In that vacuum, however, someone will instruct them in something. And it is almost guaranteed to be from the catechism of depravity and sin, and not the Catechism of the Catholic Church.

[Comment Guidelines - Click to view]
The Remnant values the comments and input of our visitors. It’s no secret, however, that trolls exist, and trolls can do a lot of damage to a brand. Therefore, our comments are heavily monitored 24/7 by Remnant moderators around the country.  They have been instructed to remove demeaning, hostile, needlessly combative, racist, Christophobic comments, and streams not related to the storyline. Multiple comments from one person under a story are also discouraged. Capitalized sentences or comments will be removed (Internet shouting).
The Remnant comments sections are not designed for frequent personal blogging, on-going debates or theological or other disputes between commenters. Please understand that we pay our writers to defend The Remnant’s editorial positions. We thus acknowledge no moral obligation whatsoever to allow anyone and everyone to try to undermine our editorial policy and create a general nuisance on our website.  Therefore, Remnant moderators reserve the right to edit or remove comments, and comments do not necessarily represent the views of The Remnant.
back to top
Last modified on Tuesday, May 10, 2022
Tweet

More in this category: « A PAPAL ONE-EIGHTY ON UKRAINE: On World War III & Pro-Abort Threats CARDINAL JOSEPH ZEN ARRESTED (Where is Pope Francis?) »