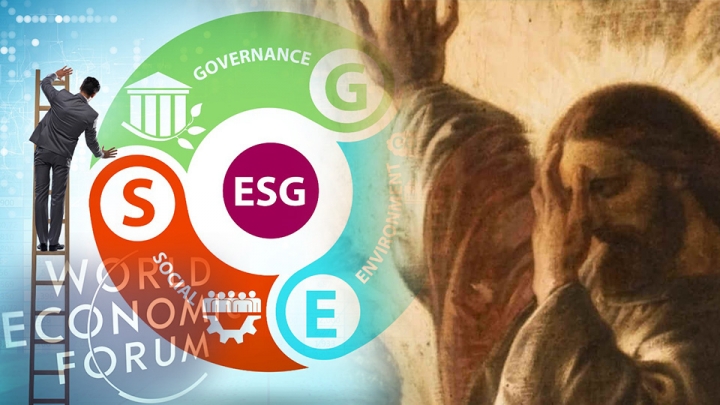 The WEF and globalists continue to emphasize a type of corporate social credit scoring system commonly referred to as ESG (Environment, Social, and Governance).

The disruption of the old ‘new world order’ and to the planned new ‘new world order’ has The World Economic Forum (WEF) and many others reconsidering the potential for an even newer ‘new world order’. Combined with controversial macro-economic factors (global digital currency, inflation policies, etc.), it is past time to critically evaluate our international commerce system.

The Catholic Framework for Economic Life (CFEL), not just useful for Catholics, was developed in 1996 by the U.S. Conference of Catholic Bishops.

With all the mismanagement, disarray and chaos of the current global economic system however, reassessment of ESG is urgently needed. To conform to ESG benchmarks, large multi-national corporations and NGOs often implement distorted policies they perceive as politically correct. Their desire is to appease the vocal extreme-left, international governing regulatory bodies, and biased media conglomerates. But they also try placate their less vocal employees, customers, suppliers, and community stakeholders. In an attempt to have it both ways, they use the ESG structure with its ‘flexible’ language. Additional points:

Out of the suffering of global conflict, tension and uncertainty however, new hope for peace, prosperity, and human development exists. Fortunately, a better structure is available: The Catholic Framework for Economic Life (CFEL). The CFEL, not just useful for Catholics, was developed in 1996 by the U.S. Conference of Catholic Bishops.

Because Christian values and morality are at the core of the CFEL, it has the necessary guardrails when competing interests arise.

It consists of ten points outlining essential protections, responsibilities, and opportunities for economic stakeholders. Those ten points are:

Because Christian values and morality are at the core of the CFEL, it has the necessary guardrails when competing interests arise. For this reason, it is more comprehensive than the secular ESG model globalists want for a centralized world economy. Note how many times morality is specifically mentioned in the CFEL’s 10 points.

Real and sustainable human development requires yielding to God’s will – not the will of those who brought us this global turmoil.

Still, the WEF and other globalists continue to advocate not only more of the same, but for hyper-globalization. Consider the following with ESG:

1. Environmental examples: Rather than reshoring and decentralized local decision making, globalists want to levy the planet’s environmental capacity even more using a highly centralized global governance system. All while telling others, that they are the ones more environmentally responsible.

3. Governance - what are the actual ESG track records to date of international corporations, NGOs, and global governing entities?

In the above ESG areas, the CFEL would have been a more comprehensive model with less chaos. It would have yielded enhanced outcomes by better balancing of the moral interests of diverse stakeholders. But in the mind of most globalists, what’s good for profits, power, and central control over others is what ESG will be used for. Its not just that globalists have frequently excluded faith based principles like those in the CFEL, but they have aggressively inflicted harm on believers with their disdain towards them.

Perhaps Larry Fink is correct about the end of globalization as we know it. Whether that is the case or not though, this should be an inflection point, because real environmental, social and governance spheres should be enhanced, not degraded. Real and sustainable human development requires yielding to God’s will – not the will of those who brought us this global turmoil. As an alternative, the CFEL could go a long way to reconciling the moral deficiencies / chaos of the current system, and the globalist’s planned Great Economic Reset.

Catch the Latest at RTV — ELON MUSK: A Lost Boy in Post-Christian Neverland

—Dr. William Raynor is a retired Professor of Business from the State University of New York

[Comment Guidelines - Click to view]
The Remnant values the comments and input of our visitors. It’s no secret, however, that trolls exist, and trolls can do a lot of damage to a brand. Therefore, our comments are heavily monitored 24/7 by Remnant moderators around the country.  They have been instructed to remove demeaning, hostile, needlessly combative, racist, Christophobic comments, and streams not related to the storyline. Multiple comments from one person under a story are also discouraged. Capitalized sentences or comments will be removed (Internet shouting).
The Remnant comments sections are not designed for frequent personal blogging, on-going debates or theological or other disputes between commenters. Please understand that we pay our writers to defend The Remnant’s editorial positions. We thus acknowledge no moral obligation whatsoever to allow anyone and everyone to try to undermine our editorial policy and create a general nuisance on our website.  Therefore, Remnant moderators reserve the right to edit or remove comments, and comments do not necessarily represent the views of The Remnant.
back to top
Last modified on Monday, May 9, 2022
Tweet
More in this category: « Sister Lucia’s 1957 Interview with Fr. Fuentes: Are We Now Rejecting the Last Means of Salvation? Remaining Faithful in an Era of Globalism »