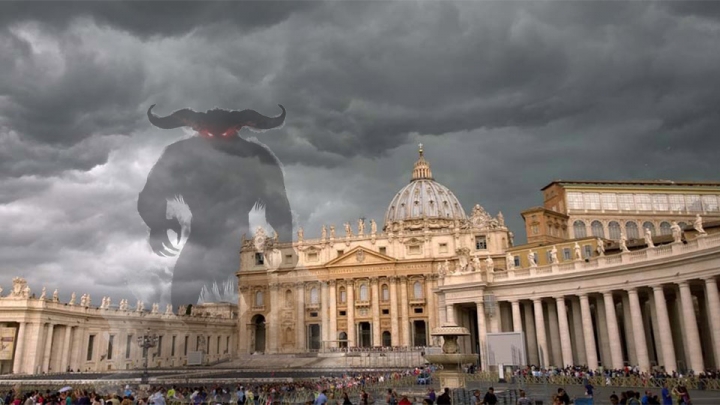 Once upon a time, in the tiny Vatican City State, Benedict XVI, the soon-to-abdicate Pope, ordered his three most trusted confidants to undertake a top-secret investigation into the financial, sexual, and moral scandals at the Vatican.

Names were named, events catalogued, and documents recorded into the report. It was an exhaustive undertaking, which shattered the investigative team’s confidence in the personnel, the prominent prelates, and clergy embroiled in immorality, financial misconduct, and other nefarious intrigues. Surely, the investigators uncovered plot lines and schemes to rival a Dan Brown novel—a veritable who’s who in the powerful homosexual Vatican lobby.

In December of 2012, the 300 page report was delivered to Benedict XVI.  The dossier contained explosive information regarding endemic financial fraud and sexual crimes among the Vatican prelates, clergy and employees.

The Vatican, like Bergoglio’s Buenos Aires, is a city where evil men walk free.

The report was dubbed the “Red Dossier.” The two-volume red leather bound dossier detailed explosive findings and a firestorm smoldered in the Vatican as the faithful awaited a response from Pope Benedict.

Yet, the response would shatter the Catholic world. No one expected the next red shoe to drop.

A mere 2 months after his receipt of the Red Dossier, on Feb. 11, 2013, Pope Benedict shockingly announced that he was retiring from the papacy. Immediately, the media speculated that the scandalous and salacious Red Dossier drove the pontiff into retirement. However, Benedict denied that the dossier caused his retirement. He announced that he no longer possessed the energy to properly conduct his papal duties.

Nevertheless, the papacy had been provided a detailed and documented bill of indictment—a valuable roadmap exposing the Vatican gay lobby.  Yet, the prosecutions and reforms demanded by the dossier would not be implemented under the Benedict papacy. His successor would be handed this hot potato.

No one has heard another word about the Red Dossier.

Following Benedict’s resignation, he delivered the explosive Red Dossier to his successor, Jorge Bergoglio. Bergoglio would be responsible to ensure, as he had promised and touted, reform of the financial and sexual Vatican scandals.

And so the clock began to tick, as Catholics waited for action from Bergoglio to address and expunge the filth documented in the Dossier.

No one has heard another word about the Red Dossier.  It is as if the Red Dossier ended up like all the historical documents of Argentina, erased from history, never to be mentioned again. Uki Goni, an Argentine author and journalist describes this Argentine ethos:

“It is the Argentine attitude: suppress, ignore. Many of the records of the Peronist era have been destroyed… There is no history in Argentina. There are no archives.”

Is the Argentine in the Chair of St. Peter suppressing and ignoring the explosive Red Dossier, hoping it will be forgotten?

Undoubtedly, the Red Dossier contained time sensitive information of ongoing criminal activity.  Rumors of sex trafficking and prostitution dominated the gossip and chatter around the Dossier investigation. The fear is that the statute of limitations on these crimes is now expired.

Since March 13, 2013, when Bergoglio assumed the Chair of Peter, talk of the Red Dossier has ceased. Apparently, evidence of potential crimes are not being investigated by Roman and Italian law enforcement. The details of the Red Dossier remain buried and hidden in the archival files of Jorge Bergoglio, as concealed as the details of his notorious secret Vatican-China pact.

The Vatican, like Bergoglio’s Buenos Aires, is a city where evil men walk free.

In the 9 years of Bergoglio’s reign, the scandal of the Vatican gay prelate and clerical lobby and the ongoing coverup of clergy abuse scandals and financial fraud rages on. In many documented cases, Jorge Bergoglio appears personally involved in the cover up. Yet, he remains untouchable and unapologetic.

Justice delayed is justice denied. The Red Dossier must gather dust no more. In the interim of the 9 years of Bergoglian cover up, the perpetrators of sexual abuse remain unchecked and continue to roam preying on victims.

[Comment Guidelines - Click to view]
The Remnant values the comments and input of our visitors. It’s no secret, however, that trolls exist, and trolls can do a lot of damage to a brand. Therefore, our comments are heavily monitored 24/7 by Remnant moderators around the country.  They have been instructed to remove demeaning, hostile, needlessly combative, racist, Christophobic comments, and streams not related to the storyline. Multiple comments from one person under a story are also discouraged. Capitalized sentences or comments will be removed (Internet shouting).
The Remnant comments sections are not designed for frequent personal blogging, on-going debates or theological or other disputes between commenters. Please understand that we pay our writers to defend The Remnant’s editorial positions. We thus acknowledge no moral obligation whatsoever to allow anyone and everyone to try to undermine our editorial policy and create a general nuisance on our website.  Therefore, Remnant moderators reserve the right to edit or remove comments, and comments do not necessarily represent the views of The Remnant.
Last modified on Monday, April 18, 2022