The Good Cop Files: With St. Michael in Savannah

“Something Told Me to Keep Going”

Chatham County, Georgia, police officer Joseph Robertson was on duty in the middle of December, 2021, when he got a call about a two-vehicle crash on a dead-end road. He was on the scene within minutes.

When he arrived he immediately ascertained that the driver of one of the vehicles was unhurt. He then ran to the second vehicle, which was on fire. Officer Robertson broke the rear window with his baton and reached inside of the burning wreck, which by that point was engulfed in flames and billowing smoke.

“I was edging farther and farther into the vehicle,” Officer Robertson tells me during a Zoom interview in late February 2022. "I kept thinking that, if I don't get this man out, I will have to live with the knowledge that he burned to death right in front of me.

I first learned of Officer Robertson in a Breitbart article about his heroism in December.

“I had about ten or fifteen more seconds. Something told me to keep going. With God's help I freed the man from the driver's seat and pulled him out of the rear window to safety.”

Officer Robertson saved that man's life that day. The victim was burned over eighty percent of his body, but he survived.

That would be the first of two lives Officer Robertson would save in the span of eighteen hours.

On his next shift, Officer Robertson was called to a residence on a report of an unresponsive female. He was, again, the first on the scene. He checked her pulse and determined that she had likely overdosed on drugs. He performed CPR and administered the anti-opioid medication NARCAN. Within three minutes, EMS arrived, administered another dose of NARCAN, and rushed the female to the hospital.

She, too, survived. Two shifts, two human beings still alive as a result of the quiet heroism of one police officer.

“I wake up every morning talking to God,” he says. “You never know what the day will bring. And I have Saint Michael with me at all times.”

Always Been a Protector

Joseph Robertson was born and raised in Savannah, Georgia. He tells me he has always been a protector, someone who felt the need to stick up for others.

“I always wanted to be a superhero,” Officer Robertson tells me a little sheepishly. “Being a police officer is a blessing, because I get to help people.”

He worked for a while in corrections with the local sheriff's office before entering the Chatham County Police Department.  Officer Robertson recalls during our interview that he likes playing team sports, and feels that working as a policeman is a way for him to be part of a team.

And yet, during our interview I get the sense that a lot of a police officer's job is solitary. Officer Robertson goes out on patrols alone and often responds solo to calls until backup arrives. But then there's the memories of his shifts, the thoughts that occupy his off time. 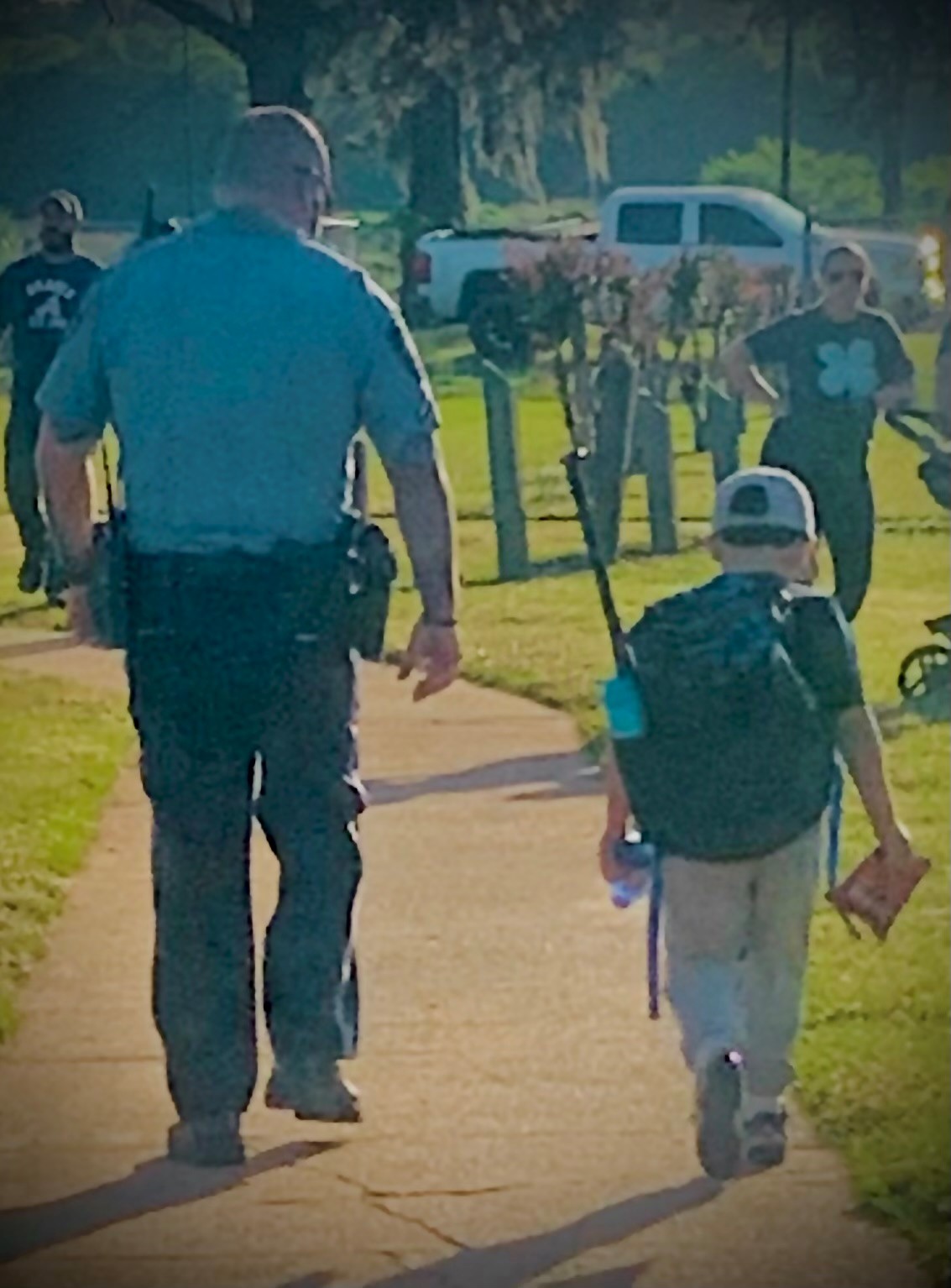 “You're always coping with it,” he mentions when I ask him whether the things he sees on the job linger in his mind long after the criminal has been arrested or the life has been saved.

“There are occasional quiet days, and you're grateful for those. And it helps to do this interview, just to have a chance to talk about what goes on.”

The job sounds like a round-the-clock challenge, even during the times when an officer is not working a shift.

You have to be ready for the worst-case scenario. And you can't expect a thank-you in return. I love what I do, I have a passion for being a police officer. I don't do it for the recognition.”

“You have to be prepared, mentally and physically, to go out on patrol,” Officer Robertson says. “You have to be ready for the worst-case scenario. And you can't expect a thank-you in return. I love what I do, I have a passion for being a police officer. I don't do it for the recognition.”

He tells me that he enjoys practicing jiujitsu in his free time—and that he's had to use those skills to subdue someone who was out of his mind on PCP.

“I would have been justified using my firearm,” Officer Robertson says. “But I didn't.”

PCP can cause people to go berserk, behaving violently without feeling any pain. Officer Robertson put himself in great danger by grappling with the PCP user instead of using his weapon to neutralize the threat. Another life saved, another act of heroism which many times goes unacknowledged.

I ask Officer Robertson about some of the negative misconceptions about police officers that seem so widespread today.

“It is 100% not true that we are trigger-happy,” he replies. “We want more than anyone to resolve situations peacefully. But you just don’t see that by watching a lot of the news out there.

Officer Robertson smiles and raises his arm slightly to show me a bracelet around his wrist. “It’s a Saint Michael medal,” he tells me. “I’m a Catholic.”

“I had my own views about the police before I became one,” he continues. “I completely changed my mind when I went out and saw what officers are asked to do. I now try to talk to people as much as I can, to explain what police officers are doing and why we’re doing it.”

It could be that these kinds of efforts are beginning to make a difference. I first learned of Officer Robertson in a Breitbart article about his heroism in December. And then, while I was researching for our interview, I found a story about some police officers in the city of Savannah who saved the life of a suicidal woman. She had jumped off a river bridge into the frigid winter waters of intercoastal Georgia. Officers were on the scene in moments. They spent nearly a half hour searching for the woman, and finally found her under a dock. Some of the officers jumped into the water to rescue her.

“Once we got to her, I wasn’t letting go of her,” recalled Savannah Police Department Officer William Fitzpatrick, one of the officers who went into the water. “Whatever I had to do to get her out, whether that be laying my own life down on the line, I was willing to do that.”

Another life saved. It is nice that the media is again calling attention to the fact that the police do this kind of thing for a living, day in and day out, all the time.

On Patrol with Saint Michael

When I first contacted the Chatham County Police Department to ask for an interview with Officer Robertson, I told them that I wrote for The Remnant but that the interview didn’t necessarily have to cover religion. To be honest, having grown up in rural Tennessee and Alabama I was expecting Officer Robertson to be Baptist, as are most people in that part of the South.

As our interview is winding down I gently broach the topic of faith.

“You mentioned earlier that you were able to pull the man out of the burning vehicle with God’s help,” I say. “Does prayer play a role in helping you get through the difficult parts of your job?”

Officer Robertson smiles and raises his arm slightly to show me a bracelet around his wrist. “It’s a Saint Michael medal,” he tells me. “I’m a Catholic.”

Officer Robertson and his family attend a local Catholic parish, and his children are enrolled at the parish Catholic school.

“I wake up every morning talking to God,” he says. “You never know what the day will bring. Everything is unknown until you arrive on the scene. My family prays for me while I’m out on duty. And I have Saint Michael with me at all times.”

[Comment Guidelines - Click to view]
The Remnant values the comments and input of our visitors. It’s no secret, however, that trolls exist, and trolls can do a lot of damage to a brand. Therefore, our comments are heavily monitored 24/7 by Remnant moderators around the country.  They have been instructed to remove demeaning, hostile, needlessly combative, racist, Christophobic comments, and streams not related to the storyline. Multiple comments from one person under a story are also discouraged. Capitalized sentences or comments will be removed (Internet shouting).
The Remnant comments sections are not designed for frequent personal blogging, on-going debates or theological or other disputes between commenters. Please understand that we pay our writers to defend The Remnant’s editorial positions. We thus acknowledge no moral obligation whatsoever to allow anyone and everyone to try to undermine our editorial policy and create a general nuisance on our website.  Therefore, Remnant moderators reserve the right to edit or remove comments, and comments do not necessarily represent the views of The Remnant.
back to top
Last modified on Monday, March 21, 2022
Tweet

More in this category: « Where Globalism Ends & Satanism Begins PUTIN'S WAR: Biden, Soros, and the Ghost of John McCain »