FRANCIS: A Clear and Present Danger 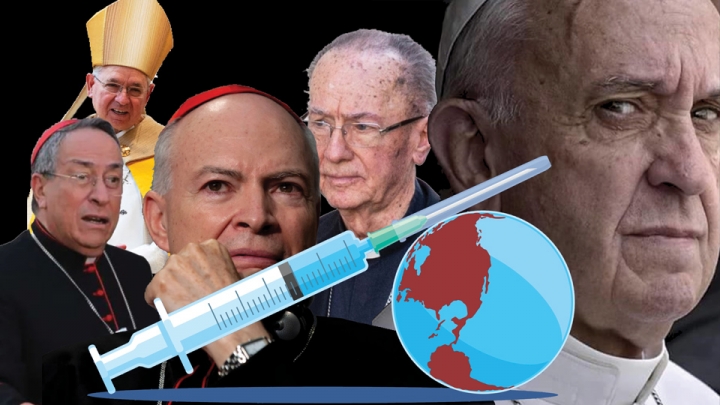 If you need any more proof than this new Vatican video that Francis presents a clear and present danger to you and your family, that's going to be on you from now on. Francis has declared his formal allegiance to the children of darkness by putting aside any and all legitimate and scientific concerns over rushed and now forced vaccines in order to join the effort to force-vaccinate the world.  But don't take my word for it. Here's your Holy Father:

And it won’t stop with forced vaccination, of course.  He’s onboard the good ship Great Reset wherever it sails.

Do you still think, for example, that Francis would never join the transhumanist gang that want to implant microchips in your children and turn humans into cyborgs?

I wonder why anyone would think that, when Francis couldn't possibly broadcast his actual intentions any more clearly.  Is it just wishful thinking? Fear of facing a pretty harsh reality?

Here's Francis's November 2020 prayer intention: "Artificial intelligence is at the heart of the epochal change we are experiencing. Robotics can make a better world possible if it is joined to the common good... Let us pray that the progress of robotics and artificial intelligence may always serve humankind . . ."

And this November? Francis will speak at the UN/John Kerry big climate show in Glasgow, alongside Joe Biden. He won't be offering a public Mass in Scotland, of course. He's too woke for that. Instead, he'll be worshipping at the Altar of Globalism.

By the way, rumor has it he's got another MP in the works to fully dismantle the Traditional Latin Mass worldwide.

Do you want to know why?

Do you want to remove the blindfold?

Do you want to convince “Father” that the New Mass was a revolution against the God and NOT just a matter of liturgical preference and putting liturgy in the vernacular?  Do you want to know the connection between Vatican II and the New Mass on the one hand and the Great Reset, population-controlling New Order on the other?

It's all in my latest Editor's Desk. Please, for God's sake and the sake of your children, watch it, share it and open your eyes:

[Comment Guidelines - Click to view]
The Remnant values the comments and input of our visitors. It’s no secret, however, that trolls exist, and trolls can do a lot of damage to a brand. Therefore, our comments are heavily monitored 24/7 by Remnant moderators around the country.  They have been instructed to remove demeaning, hostile, needlessly combative, racist, Christophobic comments, and streams not related to the storyline. Multiple comments from one person under a story are also discouraged. Capitalized sentences or comments will be removed (Internet shouting).
The Remnant comments sections are not designed for frequent personal blogging, on-going debates or theological or other disputes between commenters. Please understand that we pay our writers to defend The Remnant’s editorial positions. We thus acknowledge no moral obligation whatsoever to allow anyone and everyone to try to undermine our editorial policy and create a general nuisance on our website.  Therefore, Remnant moderators reserve the right to edit or remove comments, and comments do not necessarily represent the views of The Remnant.
back to top
Last modified on Thursday, August 19, 2021
Tweet

More in this category: « Pray for Cardinal Burke: An Urgent Message from Archbishop Viganò CARDINAL VIRTUE: Burke Suffers for the Unborn »