The 1963 Vatican Enthronement of Lucifer: A 'Windswept House' Update 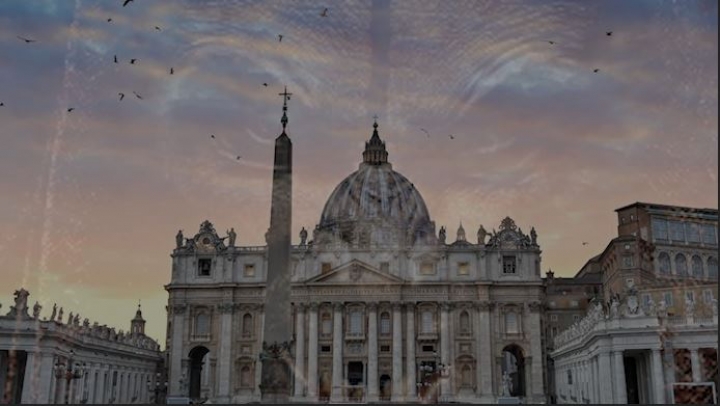 Kathy Thompson's article about the late Fr. Malachi Martin's book Windswept House (The Remnant, April 30) was very interesting, but its chronology regarding the enthronement of Lucifer in the heart of the Vatican needs clarification. I am able to contribute some personal testimony of my own about this matter that I believe will interest Remnant readers. Also, it will add to what is publicly known about a reported event which, if indeed it took place, was very probably a significant factor in exacerbating that 'smoke of Satan' which has corrupted so many aspects of the Church's life and witness since Vatican Council II.

Ms. Thompson correctly records that Fr. Martin described his novel as a work of "faction" - one that recorded many events that really took place while embellishing them, and changing dates and names, in order to make it clear that the book wasn't intended as straight history. 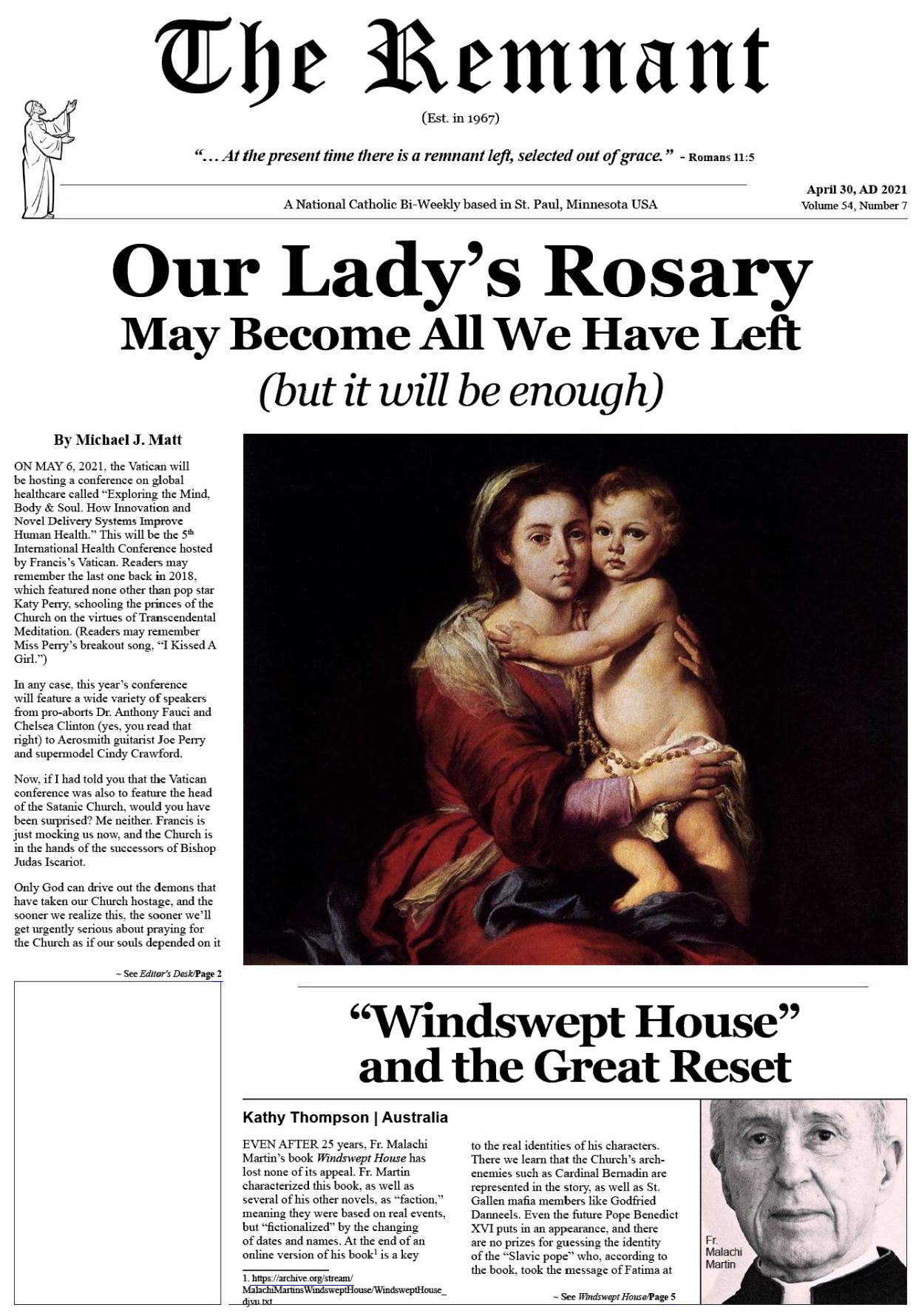 Now, in column 1 on p. 5 she says that the real date of the infamous event described at the beginning of Windswept House is said to have been 1957, while in column 3 she says it took place "in the 1960s".  I can clarify what Fr. Martin said was the true date of the Luciferian Enthronement inside the Vatican with the following information from a quarter-century ago that I have never made public until now.

In the last decade of Malachi Martin's life (he died in 1999) I became a personal friend of his and would visit him in his Manhattan apartment whenever I was in New York. In the section headed "1963" in the Prologue of Windswept House, we read that this shocking ceremony, enthroning "the Fallen Archangel Lucifer" in the Chapel of St. Paul, took place on June 29, 1963, the Feast of SS. Peter and Paul, the eve of the coronation of the newly elected Pope Paul VI.

It celebrated gloatingly the long-prepared-for arrival of a pope more open to liberal changes than any of his predecessors. Around the time the book was published in 1996, Fr. Martin told me that this date was indeed "factional", and that the true date of this blasphemous act of devilry, coordinated with a corresponding ceremony on the American side of the Atlantic, was actually one day later. That is, it took place the night after Paul's VI's coronation in St. Peter's Square on the afternoon of Sunday, June 30. Malachi told me it was indeed carried out in the Chapel of St. Paul, as Windswept House says, and began at midnight on the night of June 30 / July 1, 1963.

At the time Fr. Martin told me this I was living in Rome during a year's study leave, finishing the dissertation for my doctorate in theology. Providentially, this was 1996, exactly 33 years after the Masonic Luciferian enthronement – an appropriate number to symbolize both the 33 years of our Lord's life on earth and the 33 degrees of Freemasonry (a number, I understand, the Masons chose precisely in defiance of Christ's social kingship).

Now, during that year I, like many other priests, was offering Mass daily at one or other of the many side altars in St. Peter's Basilica. Fr. Martin was at home in New York City, and in a telephone conversation with him I suggested that it would be very appropriate for both of us to celebrate Masses of reparation on the 33rd anniversary of this wicked outrage, I in the Vatican—where it took place—and he on the East coast of the U.S., where the parallel Luciferian ceremony was simultaneously carried out. Again providentially, even the day of the week was the same: July 1st fell on a Monday in 1996, as it had in 1963.

Fr. Martin readily agreed, and that's what we did:  I offered a Mass of reparation in the Blessed Sacrament Chapel of St. Peter's on 7/1/96 (a ferial day in the Novus Ordo calendar), and he celebrated his Mass for that intention on the same day in the little oratory within his apartment. (For him it was the Feast of the Precious Blood, since he always celebrated the Traditional Latin Mass.)

Fr. Martin also told me the Satanic act became known because one of its participants repented a decade or so later on his deathbed and confessed this grave sin. The Roman priest hearing his confession told him he had a grave obligation to allow this shocking sacrilege to be made known to the Supreme Pontiff, in order for a re-consecration of the Pauline Chapel to be made. Accordingly, he told the penitent he could not absolve him unless the latter gave him permission to make this shocking event known to higher ecclesial authority. The penitent did so, and Fr. Martin told me he later learned the whole story through his Vatican connections.  Hopefully, there was a re-consecration of the chapel; but if so it would of course have been carried out in strict secrecy in order to avoid scandal.

To me, what I have recounted above is further evidence that Malachi Martin was telling me what he believed to be the truth about the Luciferian Enthronement, the date on which it historically took place, and the way he came to know about it. For I find it hard to imagine him making a Mass intention part of a conscious lie that he had fabricated.

Published in Remnant Articles
[Comment Guidelines - Click to view]
The Remnant values the comments and input of our visitors. It’s no secret, however, that trolls exist, and trolls can do a lot of damage to a brand. Therefore, our comments are heavily monitored 24/7 by Remnant moderators around the country.  They have been instructed to remove demeaning, hostile, needlessly combative, racist, Christophobic comments, and streams not related to the storyline. Multiple comments from one person under a story are also discouraged. Capitalized sentences or comments will be removed (Internet shouting).
The Remnant comments sections are not designed for frequent personal blogging, on-going debates or theological or other disputes between commenters. Please understand that we pay our writers to defend The Remnant’s editorial positions. We thus acknowledge no moral obligation whatsoever to allow anyone and everyone to try to undermine our editorial policy and create a general nuisance on our website.  Therefore, Remnant moderators reserve the right to edit or remove comments, and comments do not necessarily represent the views of The Remnant.
back to top
Last modified on Monday, May 3, 2021
Tweet
More in this category: « THE GREAT RESET: From Enlightenment to Globalism ON THE ENLIGHTENMENT: Remnant Columnist, Jason Morgan, Speaks in Tokyo »