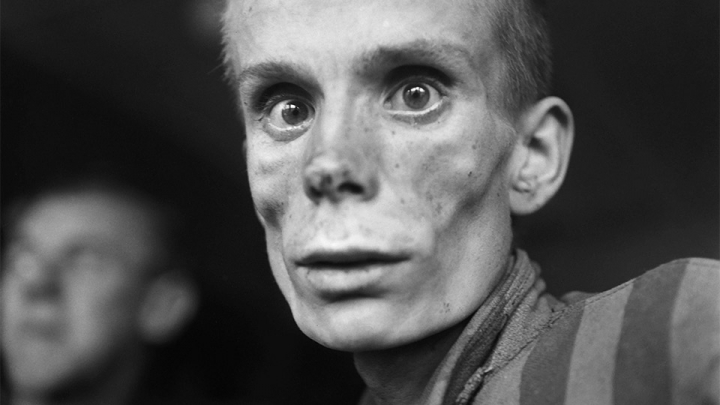 “Do you want Total War?”

This was the question that Joseph Goebbels asked to a select audience of Nazi Party stalwarts during his perhaps most famous speech at the Berlin Sports Palace on February 18th, 1943. Accompanied by measures fully mobilizing the German people for conflict for the first time since the outbreak of hostilities in 1939, it was seen as a defiant response to Franklin Roosevelt’s announcement of the United Nations Alliance call for  “Unconditional Surrender” of the Axis Powers at a meeting in Casablanca just a few weeks earlier.

I can picture someone like Klaus Schwab, the creepy head of the World Economic Forum, posing Goebbel’s same question before a private, closed-door crowd filled with handpicked representatives of the Global Oligarchy pursuing its goal of worldwide secularist enslavement today. But, unfortunately, he would not be doing so in grim realization that the Enemy---that is to say, you and me and others like us---had issued a dangerous call for submission that was backed by incredibly powerful forces growing stronger every day. 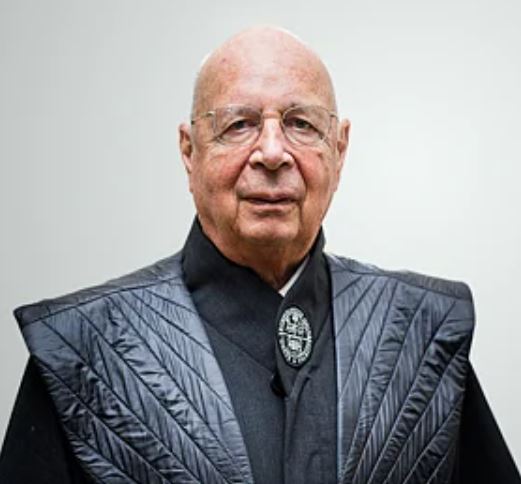 I can picture someone like Klaus Schwab, the creepy head of the World Economic Forum, posing Goebbel’s same question before a private, closed-door crowd filled with handpicked representatives of the Global Oligarchy.

For in this time of apparent fulfillment of the Fatima warning of a “diabolical disorientation” exercising its wicked influence over every aspect life---a time when Nazi eugenicists like Bill Gates can successfully pose as gentle benefactors of humanity as they poke and butcher us---it is an Axis of Evil that has also brought together a bizarre “United Nations Alliance” of its own that has issued the demand for an Unconditional Surrender from the battered masses of locked down, bankrupted, muzzled, depressed mankind. And, alas, mankind’s willingly complicit, frighteningly fellow-travelling, or stupidly sheep-like “leaders” have almost all of them groveled for the privilege of being the first to lick the Axis-Alliance’s boots. From my vantage point, it seems that religious leaders, with the Pope at the top of the list, have hands down won that race to voluntary self-abasement.

The Mad Hatters Party that this joint Axis of Evil-United Nations Alliance has put together---a union which confirms nineteenth century Catholic counterrevolutionary writers’ predictions that the New World Order coming into being would be a whacky mixture of criminal ideologues, money men, and perverts---includes any number of standard bearers of the endless permutations of the fight for evil: the totalitarian multinational corporation officially named the Chinese Communist Party, the European Union, the former American Republic now under the dictatorship of the Revolutionary Democratic Party, the WHO, the Federation of Davos Bandits, Facebook, You Tube, Big Media, Big Pharma, the ever expanding LGBTQ+++ Community, and a myriad of other debauched groups and individuals whose names my readers could easily toss into this bucket of muck by the armful.

They have created a Mystical Body of Satan that claims to have the social distancing drones, double-speak, extra thick masks, and DNA changing syringes that set men free.

Before I get to the main point of my current rant, allow me to tip my hat to the Devil to give him his proper due. Once again, just as Catholic counterrevolutionary thinkers had foreseen, he and his agents, both conscious and unconscious, have mustered their army of Gog and Magog under banners and with battle cries that eerily imitate those of the Mystical Body of Christ. They have created a Mystical Body of Satan that claims to have the social distancing drones, double-beak, extra thick masks, and DNA changing syringes that set men free: not, of course, by actually doing so, which is what happens through the graces of the Christian Commonwealth, but by chaining them up and brainwashing them into calling what is slavery and slow medical death an existence of a peace and security “that passeth all understanding”. 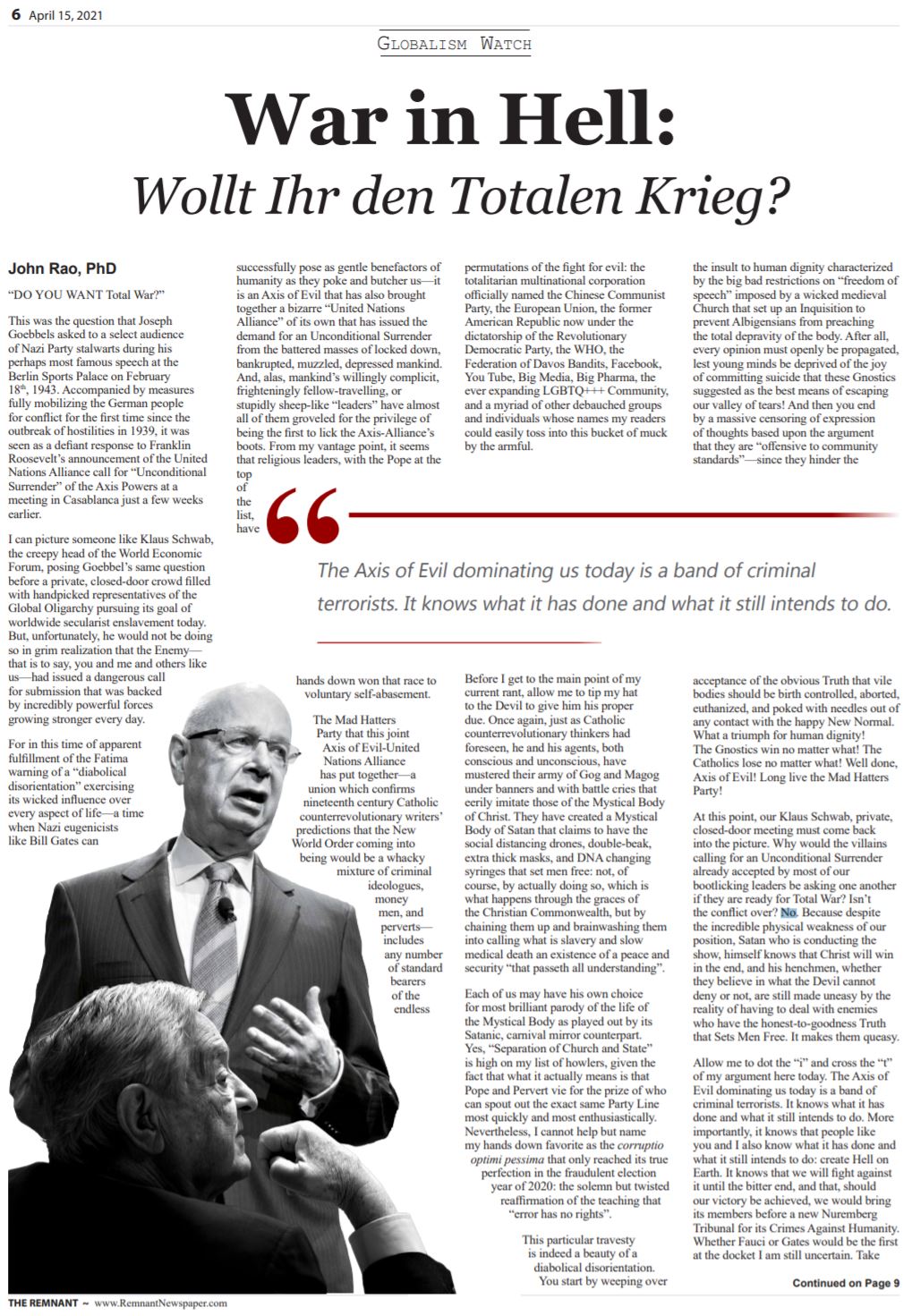 Each of us may have his own choice for most brilliant parody of the life of the Mystical Body as played out by its Satanic, carnival mirror counterpart. Yes, “Separation of Church and State” is high on my list of howlers, given the fact that what it actually means is that Pope and Pervert vie for the prize of who can spout out the exact same Party Line most quickly and most enthusiastically. Nevertheless, I cannot help but name my hands down favorite as the corruptio optimi pessima that only reached its true perfection in the fraudulent election year of 2020: the solemn but twisted reaffirmation of the teaching that “error has no rights”.

This particular travesty is indeed a beauty of a diabolical disorientation. You start by weeping over the insult to human dignity characterized by the big bad restrictions on “freedom of speech” imposed by a wicked medieval Church that set up an Inquisition to prevent Albigensians from preaching the total depravity of the body. After all, every opinion must openly be propagated, lest young minds be deprived of the joy of committing suicide that these Gnostics suggested as the best means of escaping our valley of tears! And then you end by a massive censoring of expression of thoughts based upon the argument that they are “offensive to community standards”---since they hinder the acceptance of the obvious Truth that vile bodies should be birth controlled, aborted, euthanized, and poked with needles out of any contact with the happy New Normal. What a triumph for human dignity! The Gnostics win no matter what! The Catholics lose no matter what! Well done, Axis of Evil! Long live the Mad Hatters Party!

The Axis of Evil dominating us today is a band of criminal terrorists. It knows what it has done and what it still intends to do.

At this point, our Klaus Schwab, private, closed-door meeting must come back into the picture. Why would the villains calling for an Unconditional Surrender already accepted by most of our bootlicking leaders be asking one another if they are ready for Total War? Isn’t the conflict over? No. Because despite the incredible physical weakness of our position, Satan who is conducting the show, himself knows that Christ will win in the end, and his henchmen, whether they believe in what the Devil cannot deny or not, are still made uneasy by the reality of having to deal with enemies who have the honest-to-goodness Truth that Sets Men Free. It makes them queasy.

Allow me to dot the “i” and cross the “t” of my argument here today. The Axis of Evil dominating us today is a band of criminal terrorists. It knows what it has done and what it still intends to do. More importantly, it knows that people like you and I also know what it has done and what it still intends to do: create Hell on Earth. It knows that we will fight against it until the bitter end, and that, should our victory be achieved, we would bring its members before a new Nuremberg Tribunal for its Crimes Against Humanity. Whether Fauci or Gates would be the first at the docket I am still uncertain. Take your pick. Still, the criminal horde knows that it is either “us” or “them”, and to prevent us from winning it requires that it wage a Total War.

Perhaps we were meant by Providence to suffer in the Wilderness a good deal longer before the tide of the Total War unleashed against us by the Mystical Body of Satan might be turned.

I cannot imagine that any of my readers still hesitates believing what I am writing here, worried that it is an expression of some “conspiratorial mentality”. A “conspiratorial mentality” is Newspeak for what used to be called rational thought, scientific research, and journalistic investigative reporting. My own awakening to what was taking shape around us came from my participation in an international legal conference in Mexico some years ago, at which I first encountered the Transhumanist and Posthumanist Movement, and the involvement in achieving what I thought to begin with to be the goals of only a handful of lunatic science faction addicts of men like Gates and the movers and shakers or the World Economic Forum. My “wising up” continued, as I noted in an earlier article in this series, once I decided to utilize the same tools needed to get my degree in history from Oxford University to study the “official Covid narrative” and realized that if I had presented it to my doctoral examiners as being true that I would have been booted out of the room as a mental incompetent. The criminals themselves told me what they up to, publically, in their websites, which are still up there on the Internet. Let them who have eyes to see and ears to hear both see and hear.

In any case, the Axis of Evil will wage its Total War in favor of the Unconditional Surrender of those of us in the Resistance who have refused the treason of our already all too corrupted leaders whether we are ready for it or not. Personally, and quite frankly, I wish that open battle had begun with over the usurped election. I would have opted for Martial Law. But, then again, the Army has proven itself to be as politicized by the Axis of Evil as so many other former pillars of Order, and perhaps that would not have worked either. Perhaps we were meant by Providence to suffer in the Wilderness a good deal longer before the tide of the Total War unleashed against us by the Mystical Body of Satan might be turned. In the meantime, once again, mobilize and prepare. Honor all men engaged in the fight for the right. Love the brotherhood. Fear God. And pray for a leader we can honor who is fully conscious of what is at stake and can lead us to a final victory under the banner of Christ the King.

[Comment Guidelines - Click to view]
The Remnant values the comments and input of our visitors. It’s no secret, however, that trolls exist, and trolls can do a lot of damage to a brand. Therefore, our comments are heavily monitored 24/7 by Remnant moderators around the country.  They have been instructed to remove demeaning, hostile, needlessly combative, racist, Christophobic comments, and streams not related to the storyline. Multiple comments from one person under a story are also discouraged. Capitalized sentences or comments will be removed (Internet shouting).
The Remnant comments sections are not designed for frequent personal blogging, on-going debates or theological or other disputes between commenters. Please understand that we pay our writers to defend The Remnant’s editorial positions. We thus acknowledge no moral obligation whatsoever to allow anyone and everyone to try to undermine our editorial policy and create a general nuisance on our website.  Therefore, Remnant moderators reserve the right to edit or remove comments, and comments do not necessarily represent the views of The Remnant.
Last modified on Wednesday, April 14, 2021