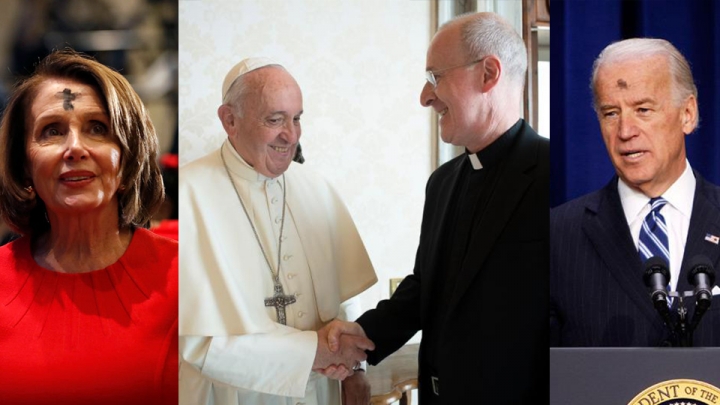 WHAT WOULD SOCIETY think of an anti-Semite who deceitfully rose to the highest level of the Anti-Defamation League and then proceeded to promote various anti-Semitic measures? Suppose for instance, that the new leader clandestinely directs ADL funds to anti-Jewish groups, sponsors defamation of Jewish heroes, appoints anti-Semitic officers throughout the organization, and gradually changes the ADL’s values to ones that are pro-Nazi.

Such a scenario sounds preposterous because right-thinking Jewish people would quickly discover the deceit and promptly remove the perpetrators.

When we are persecuted by the hateful liberal Catholics who do not have the decency to convert or stop calling themselves Catholic, we have good reason to think that we are among those Jesus has chosen out of the world.

How, then, could something even more preposterous and grotesque happen to the Catholic Church, which for nearly two thousand years overcame all attempts to subvert its mission? Quite simply, the Catholic Church has been almost undone through the intentional abuse of one word that is more powerful with Catholics than it is with any other group: obey. With this word, the liberal Catholics managed to transform the beliefs and practices found in most Catholic churches, schools, and ultimately families, into something that no prior generation would have recognized as Catholic. The fact that the perpetrators of this crime in the Catholic Church had to insist on obedience to overcome the skepticism and anger of ordinary Catholics confirms their malice. Certainly not every parish priest, or even every bishop, had contempt for Catholicism, but there were enough that did.

One may object that there is no such “liberal Catholic” influence in the Church, but as Pope Pius IX wrote in 1873, the Church has long fought this battle with the same enemies:

“Even though the children of this world are more clever than the children of light, their traps (the enemies of the Church) would have so much less success if it were not for so many who hold out a helping hand, and still call themselves Catholic. Yes, unfortunately, there are those who seem to wish to march with our enemies and go out of their way to establish an alliance between the light and the darkness, between justice and iniquity. They do so by means of these doctrines which we call ‘Catholic Liberalism.’ Making use of these most pernicious errors, they flatter secular power when it invades the spiritual forum and force souls to respect, or at least, to tolerate most evil laws, as if it were never written that one cannot serve two masters. These are more dangerous and deadly than declared enemies, because they support their efforts without being noticed, perhaps not realizing it themselves.”

The popes had managed to limit the influence of liberal Catholicism until Vatican II. But as declared by one of the key proponents of liberal ideas during the Council, Cardinal Leo Jozef Suenens, “Vatican II is the French Revolution in the Church.”

One may further object that there can never truly be a subversion of the Catholic Church because “where Peter is, there is the Church” (ubi Petrus ibi Ecclesia) and the popes have promoted the liberal changes. Yes, but Roberto de Mattei provides the relevant counterpoint in his Apologia for Tradition:

“The dogmatic principle Ubi Petrus ibi Ecclesia did not rule out the possibility of critiques of the popes out of love for the Church of Christ of which they were not always worthy vicars. ‘The axiom, Where the pope is, there is the Church, Cardinal Journet writes, is valid when the pope behaves like the pope and head of the Church; otherwise the Church is not in him, nor is he in the Church.’”

Unlike other organizations, the Catholic Church can never change its beliefs to contradict what it has previously taught. Were it to do that, it would completely invalidate its entire claim to being the faithful guardian of the religion it received from God. God would be a deceiver.

Moreover, as Christopher Ferrara wrote in his November 2018 article in The Remnant, The Pope Who Would Destroy the Church (which is sadly more timely today), St. Robert Bellarmine specifically dealt with the issue of a pope who would attempt to destroy the Church:

“Therefore, just as it would be lawful to resist a Pontiff invading a body, so is it lawful to resist him invading souls or disturbing a state, and much more if he should endeavor to destroy the Church. I say, it is lawful to resist him, by not doing what he commands, and by blocking him, lest he should carry out his will; still, it is not lawful to judge or punish or even depose him, because he is nothing other than a superior. See Cajetan on this matter, and John de Turrecremata.”

Of particular interest in light of the understandably growing belief that Pope Francis has either lost the papacy or never had it, such a man would presumably do all he could to remain in power. And we have to assume he would be familiar with the passage from St. Robert Bellarmine that provides a primary theological rationale for removing him:

“A pope who is a manifest heretic automatically (per se) ceases to be pope and head, just as he ceases automatically to be a Christian and a member of the Church. Wherefore, he can be judged and punished by the Church.”

We may all theorize on whether the theological line of “manifest heresy” has been crossed, but it is foolish to believe a pope trying to destroy the Church would knowingly and willingly cross the practical line that would lead to him being punished for the manifest heresy. Indeed a dedicated destroyer of the Church would surely welcome and mock traditional Catholic anger and tears on this point. The papal bully knows that he has crossed the theological line and asks us what we are going to do about it, knowing that he has not crossed any practical line that will spur his removal. God alone can end such a catastrophe.

We can also directly tie the widespread sexual abuse scandals to changes in seminary admission and formation practices that flow from the liberal infiltration.

But are there any violent crimes? Yes, we can also directly tie the widespread sexual abuse scandals to changes in seminary admission and formation practices that flow from the liberal infiltration. Without a question, human nature is such that almost any organization will have its share of these scandals over time, but the scale of the problem in the Church results directly from intentional undermining of traditional Catholic practices and beliefs.

And though we could not expect liberal Catholics to acknowledge such a harm, we should add the worst of all: the fact that so many souls will have gone to hell as a result of the liberal Catholic attacks on the Church. Our Lord makes it clear that this is worse than any purely temporal crime: “fear ye not them that kill the body and are not able to kill the soul; but rather fear him that can destroy both soul and body in hell” (Matthew 10:28). God alone knows the magnitude of this evil consequence of liberal Catholicism.

Any group of malefactors may include some mere fools, but there are far too many wrong-way signs on the liberal Catholic path to absolve the leadership of responsibility.

To these direct harms we could add countless indirect harms, ranging from depression and suicide to an increase in abortions and other violent crimes. We may even wonder what American politics would look like if Catholic schools had been teaching the real Faith for the past sixty years — surely we would not be so familiar with Mr. Biden.

But, one may ask, is it not possible that these liberal Catholics truly believe they are faithful Catholics? Sure, any group of malefactors may include some mere fools, but there are far too many wrong-way signs on the liberal Catholic path to absolve the leadership of responsibility. A Catholic priest who has spent many years in a Catholic seminary — no matter how poor the formation — has no excuse for believing that the current liberal Catholic beliefs are consistent with what the Church has always taught. The evil fruits alone are enough to alert a person of good will that the liberal Catholic influence has been pure poison.

By remaining in the Church, the current group of malefactors shows contempt not simply for the Catholic teachings but for those who adhere to such teachings.

So there are intentional crimes, but can one really say that there is hate involved? Yes, the aim of liberal Catholicism is to change the beliefs that Catholics held prior to Vatican II, precisely because they hate the traditional beliefs. Throughout the history of the Church, there have been those who have called themselves Christian but have hated certain aspects of Church teaching. The most hostile of these have had the decency to break with the Church and form another religion. By remaining in the Church, the current group of malefactors shows contempt not simply for the Catholic teachings but for those who adhere to such teachings. The sweet priest who is so free with hugs and heresy is by far a greater enemy to the Catholic Church than any Protestant.

No court of law in the world will ever recognize the liberal Catholic hate crime, but we cannot imagine that God will ignore it. Lest we despair, though, Jesus told us that we should expect and take comfort in all of this:

When we are persecuted by the hateful liberal Catholics who do not have the decency to convert or stop calling themselves Catholic, we have good reason to think that we are among those Jesus has chosen out of the world. With that consolation we should obey one of the most difficult commands Jesus gave us:

“But I say to you, love your enemies: do good to them that hate you and pray for them that persecute and calumniate you” (Matthew 5:44).

Pray for these enemies, but do not follow them! Immaculate Heart of Mary, pray for us!

Published in Remnant Articles
[Comment Guidelines - Click to view]
The Remnant values the comments and input of our visitors. It’s no secret, however, that trolls exist, and trolls can do a lot of damage to a brand. Therefore, our comments are heavily monitored 24/7 by Remnant moderators around the country.  They have been instructed to remove demeaning, hostile, needlessly combative, racist, Christophobic comments, and streams not related to the storyline. Multiple comments from one person under a story are also discouraged. Capitalized sentences or comments will be removed (Internet shouting).
The Remnant comments sections are not designed for frequent personal blogging, on-going debates or theological or other disputes between commenters. Please understand that we pay our writers to defend The Remnant’s editorial positions. We thus acknowledge no moral obligation whatsoever to allow anyone and everyone to try to undermine our editorial policy and create a general nuisance on our website.  Therefore, Remnant moderators reserve the right to edit or remove comments, and comments do not necessarily represent the views of The Remnant.
back to top
Last modified on Wednesday, March 10, 2021
Tweet

More in this category: « MESSAGE OF ARCHBISHOP CARLO MARIA VIGANÒ TO AMERICAN CATHOLICS AND TO ALL AMERICANS OF GOOD WILL TRUMP 2020: Democracy in Chaos »