Christopher Columbus belongs to the Church, and any affront to him is directed at the Church, which has the duty to defend his memory. 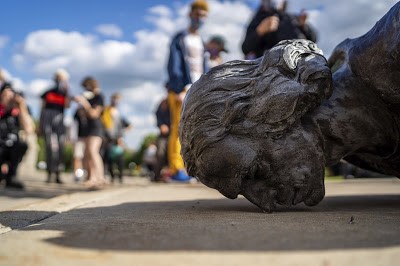 “Columbus noster est!” “Christopher Columbus is ours!” These words of Leo XIII, in his encyclical Quarto Abeunte Saeculo, issued July 16, 1892, on the IV Centenary of the discovery of America, are like a distant echo to us, at a time when iconoclastic fury in the United States of America is destroying the figure of the Italian navigator.

Leo XIII states in this encyclical that Christopher Columbus’s venture:

is in itself the highest and grandest which any age has ever seen accomplished by man; and he who achieved it, for the greatness of his mind and heart, can be compared to but few in the history of humanity. By his toil another world emerged from the unsearched bosom of the ocean: hundreds of thousands of mortals have, from a state of blindness, been raised to the common level of the human race, reclaimed from savagery to gentleness and humanity; and, greatest of all, by the acquisition of those blessings of which Jesus Christ is the author, they have been recalled from destruction to eternal life. (…)

For Columbus is ours; since if a little consideration be given to the particular reason of his design in exploring the mare tenebrosum, and also the manner in which he endeavored to execute the design, it is indubitable that the Catholic faith was the strongest motive for the inception and prosecution of the design; so that for this reason also the whole human race owes not a little to the Church. (…) This view and aim is known to have possessed his mind above all; namely, to open a way for the Gospel over new lands and seas. (…)

Columbus certainly had joined to the study of nature the study of religion, and had trained his mind on the teachings that well up from the most intimate depths of the Catholic faith. For this reason, when he learned from the lessons of astronomy and the record of the ancients, that there were great tracts of land lying towards the West, beyond the limits of the known world, lands hitherto explored by no man, he saw in spirit a mighty multitude, cloaked in miserable darkness, given over to evil rites, and the superstitious worship of vain gods.

Miserable it is to live in a barbarous state and with savage manners: but more miserable to lack the knowledge of that which is highest, and to dwell in ignorance of the one true God. Considering these things, therefore, in his mind, he sought first of all to extend the Christian name and the benefits of Christian charity to the West, as is abundantly proved by the history of the whole undertaking”.

Hence, Christopher Columbus belongs to the Church, and any affront to him is directed at the Church, which has the duty to defend his memory. This spirit inspired Count Antoine-François-Félix Roselly de Lorgues (1805-1898) who dedicated his life to promoting the cause for Christopher Columbus’s canonization. Encouraged by Pius IX, in 1856, in Paris, Roselly de Lorgues published a two-volume work entitled: Cristophe Colomb. Histoire de sa vie et de ses voyages; d’après des documents authentiques tirés d’Espagne et d’Italie, which achieved world-wide success. In this work, Roselly de Lorgues, for the first time, offers his thesis for the canonization of the “Admiral of the Ocean”.  He writes in a subsequent work: “…he was the ambassador of God to unknown nations that the ancient world were unaware of”  and “ the natural legate of the Holy See in those new regions”. (Della vita di Cristoforo Colombo e delle ragioni per chiederne la beatificazione, tr. it., per Ranieri Guasti, Prato 1876, p. 83)

Based on the French Count’s studies, numerous petitions for opening the cause of his canonization were begun, the first being those presented to Pius IX on July 2, 1866 by Cardinal Ferdinand Donnet, Archbishop of Bordeaux and on May 8, 1867 by Monsignor Andrea Charvaz. Archbishop of Genoa. In 1870, a new petition was put to Pius IX by a group of Fathers from the First Vatican Council, but due to the interruption of the works and the subsequent death of Pius IX, the initiative was brought to a halt. 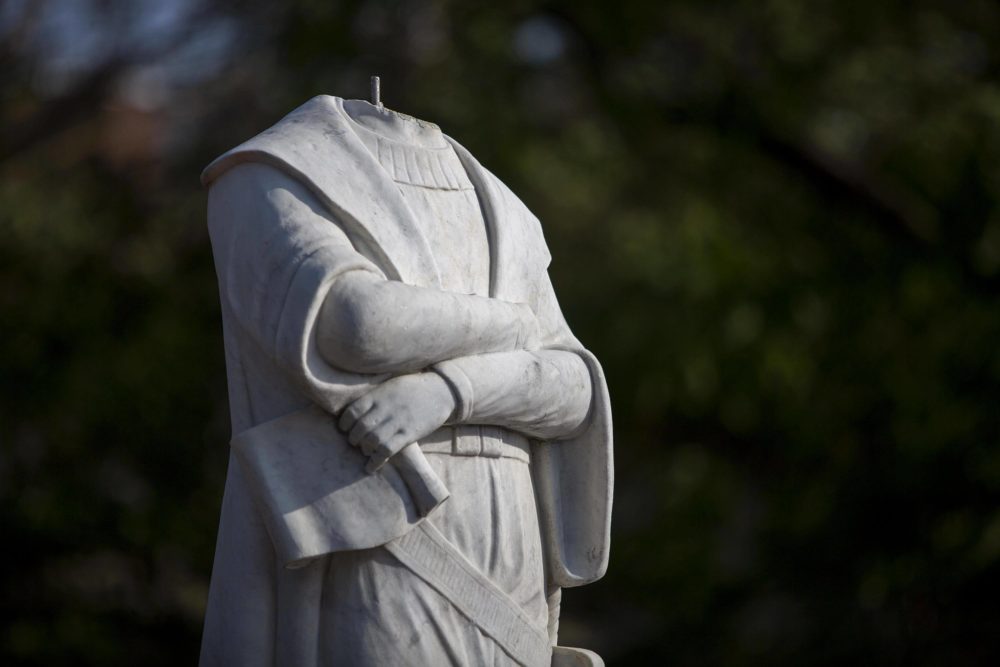 In 1878, Archbishop Rocco Cocchia, Vicar and Apostolic Delegate to Santa Domingo, Haiti and Venezuela, interpreted the finding of Columbus’s remains in the Cathedral of Santo Domingo as a sign and described the Admiral as the man called by Providence to the greatest work of the modern ages. The Archbishop noted that Columbus’s initial ‘great idea’ was a crusade for the liberation of the Holy Sepulcher and that he had always been considered “a man of great piety and religion”, who faced many sufferings and much persecution with faith and heroism, so much so that the two poles to his existence were: “pain and grace”.

On January 31, 1893, the request for the cause of his canonization boasted the adhesion of  904 Prelates. Along with the 264 Italian bishops, the 96 French, the 64 Spanish, the 27 of the U.S., the 19 Mexican and the 7 Portuguese, many, many other bishops and archbishops from all over the world adhered to the petition, among whom were 42 cardinals. An Italian scholar, Alfonso Marini Dettina, dedicated an accurate study to this theme which I recommend for further study on the topic (Suppliche per la canonizzazione di Cristoforo Colombo, in  in C.e.s.c.o.m, Atti del II Congresso Colombiano, Torino 2006, pp. 659-672).

There are those who believe that some dark aspects exist in the life of Columbus. For instance, a second illegitimate marriage, but in 1938, Father Maria Paolini, Postulator General of the Franciscan Order, published a book entitled Christopher Columbus in his moral life, wherein he sets forth twelve arguments demonstrating the legitimacy of his second union with Beatrice Enriquez of Cordoba.  Cardinal Eugenio Pacelli, the Secretary of State, in a letter dated September 9, 1938, conveyed to the author, Pius XI’s rejoicing about “a work which throws splendid beams of light on the figure of the Discoverer of the New World, who emerges no less magnificent and powerful in ecclesiastical History than he does in civil History.”

The new request for Columbus’ beatification was put forward to Pius XII in 1941 by some American bishops. All the petitions for the canonization of the Admiral asked the Pontiff to dispense with the ordinary process, considering the exceptionality of the man, the seal given by Providence for his work and the exceptional treatment Columbus received during his lifetime from the Holy See. Neither Pius XII nor the Franciscan Order followed up the cause for his beatification and after the Second Vatican Council, a vilifying campaign began, also within the Catholic world, that reached its apex in 1992, on the V centenary of the discovery of America, when Columbus was depicted as an avid, bloodthirsty, colonialist conquistador.

Thirty years have passed and today the ecological, indigenous ultra-left is conducting violent demonstrations in the United States in which the statues of Christopher Columbus are being knocked down, decapitated, defaced or removed. In recent years, many American States have decided to transform Columbus Day, the 12th of October, the day in which the arrival of the Italian navigator is celebrated, into “Indigenous Peoples Day”  - the day of the indigenous American populations. And Pope Francis himself, instead of re-launching the cry  “Columbus belongs to the Church”, praises the indigenous movements accusing Columbus of having opened an era of genocide and slavery for the American peoples.

Christopher Columbus and the conquistadors have been accused of genocide because of the demographic collapse which occurred in those populations from the XVI century onwards. Nonetheless, as the historian Marco Tangheroni (1946-2004) explained well, we can speak of genocide when there is a definite will to annihilate a population, as was seen in the Kulaks in Soviet Russia, the Jews in Nazi Germany or even before that, the Vendéens  during the French Revolution; however in the case of the American population, the demographic catastrophe was due to a biological shock caused by some infective diseases introduced by the Europeans, and certainly not by the will to annihilate (Cristianità, Modernità Rivoluzione, Sugarco, Milano 2009, pp. 125-126).  In the documents by the Spanish doctors who went to America, we read, on the contrary, descriptions of their surprise and powerlessness when faced with epidemics among the indigenous, manifested in a new and absolutely unknown form.

Unless we imagine that the diseases which wiped out the indigenous populations were fruit of a “conspiracy” by the  Spanish “powers that be”. Neither today, nor in the XVI century, have epidemics been used as a biological weapon to destroy indigenous people and Christopher Columbus is not a symbol of iniquity, but the author of a venture defined by Francisco Lopez de Gomara in his Historia General de las Indias (1552), “the greatest thing since the creation of the world, apart from the Incarnation and Death of the One Who created it.” («la mayor cosa después de la creación del mundo, sacando la Encarnación y muerte del que lo crió. Edizione Biblioteca Ayacucho, Caracas 1979, p. 7).

From Roberto de Mattei and our friends at the Lepanto Institute, Rome

[Comment Guidelines - Click to view]
The Remnant values the comments and input of our visitors. It’s no secret, however, that trolls exist, and trolls can do a lot of damage to a brand. Therefore, our comments are heavily monitored 24/7 by Remnant moderators around the country.  They have been instructed to remove demeaning, hostile, needlessly combative, racist, Christophobic comments, and streams not related to the storyline. Multiple comments from one person under a story are also discouraged. Capitalized sentences or comments will be removed (Internet shouting).
The Remnant comments sections are not designed for frequent personal blogging, on-going debates or theological or other disputes between commenters. Please understand that we pay our writers to defend The Remnant’s editorial positions. We thus acknowledge no moral obligation whatsoever to allow anyone and everyone to try to undermine our editorial policy and create a general nuisance on our website.  Therefore, Remnant moderators reserve the right to edit or remove comments, and comments do not necessarily represent the views of The Remnant.
back to top
Last modified on Monday, July 6, 2020
Tweet

Prof. De Mattei is President of the Lepanto Foundation, as well as Founder and Director of the Lepanto Cultural Centre. He directs the magazine “Radici Cristiane” and the “Corrispondenza Romana” News Agency. He is the author of many books, that have been translated into several languages, and earned him an international reputation. Between 2003-2011 he was Vice President of the Italian National Research Council (CNR). He was also a member of the Board of Directors of the Italian Historical Institute. He is married to Rita di Campello and father of 5 children.