‘Appeal for the Church and the World’: A Catalyst for Honest Debate 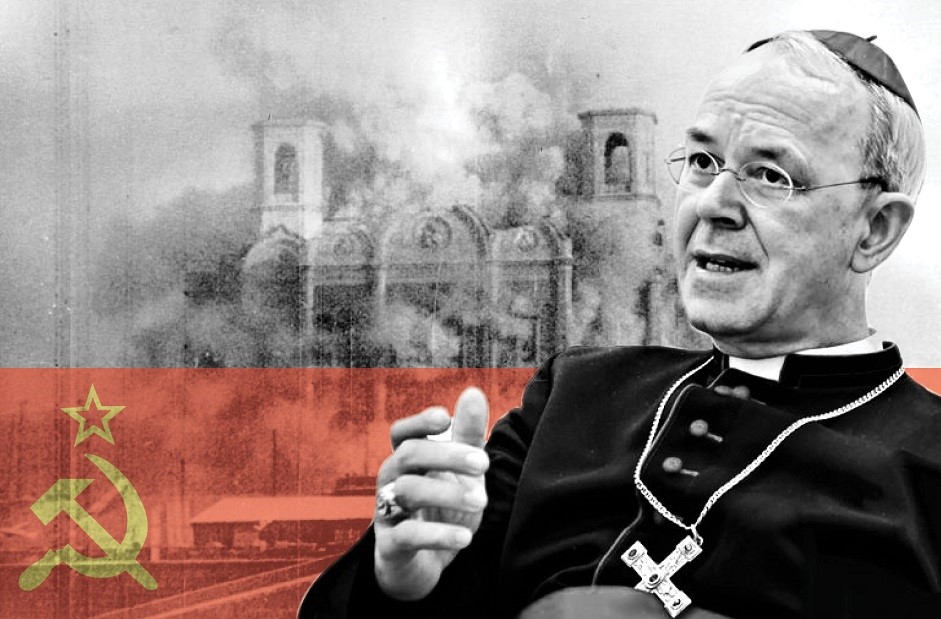 ROME — It is astonishing to witness how the Church, political and media establishment have sought to “squelch discussion” and discredit the recent “Appeal for the Church and the World” as mere “conspiracy theory,” Bishop Schneider has said.

Writing in the prominent German daily, Die Tagespost, on May 14, the auxiliary bishop of Astana, Kazakhstan, said the reactions and language of critics of the Appeal are reminiscent of life under Soviet Communism, when “dissenters of the prevailing ideology and politics were accused of being complicit in the ‘conspiracy theory’ disseminated by the capitalist West.”

Bishop Schneider, who tells the story of growing up in the Soviet underground church in his book Christus Vincit, said the unwillingness of critics to consider the facts and official data on Covid-19 should concern anyone who thinks “independently” about the “possibility that subtle forms of dictatorship exist in our society.”

The ‘Appeal for the Church and the World’, released by Archbishop Carlo Maria Viganò on May 7, was signed by three cardinals, including Cardinal Joseph Zen Ze-kiun, nine bishops and several theologians. The initial list of more than 80 signatories also included doctors, lawyers, journalists and heads of associations. American signatories include Michael Matt, Editor of The Remnant, and Steven Mosher, a renowned expert on China and President of the Population Research Institute.

The Appeal calls on the scientific community to provide real cures for Covid-19 and reminds them that developing or using vaccines derived from aborted fetuses is “morally unacceptable.” It exhorts government leaders to ensure that citizens are not controlled through “contact-tracking” or other methods of surveillance. And it urges the media to provide accurate information by giving room to “voices that are not aligned with a single way of thinking.”

The Appeal came under particularly harsh criticism from German prelates.

In his article for Die Tagespost, Bishop Schneider observes that “eliminating or discrediting societal debate and dissenting voices is a chief characteristic of a totalitarian regime.”

“Only dictatorships fear objective debate when there are differing opinions,” he said.

He also noted that the appeal does not deny the existence of an epidemic and the need to fight it. But he said it does raise serious concerns about increased surveillance and mandatory vaccinations, a proposal that has been making its way through the German parliament.

Bishop Schneider also addresses government attempts to interfere in matters pertaining to the Church, including how Holy Communion is to be distributed. “History will one day lament the ‘regime-clerics’ of our time who subserviently accepted such interference by the State,” he said. “History has always lamented that, in times of great crisis, the majority remained silent and dissenting voices were stifled.”

Here below is the official English text of Bishop Athanasius Schneider’s commentary, titled ‘Appeal for the Church and the World’: A Catalyst for Honest Debate.

‘Appeal for the Church and the World’: A Catalyst for Honest Debate

On May 8, 2020, a document titled Appeal for the Church and the World: to Catholics and all people of good will was published. Its initial signatories included, among others, three cardinals, nine bishops, eleven doctors, twenty-two journalists and thirteen lawyers.

It is astonishing to see how representatives of the ecclesiastical, as well as political and media, establishment have, in obeisance to the prevailing uniform thinking, unanimously sought to discredit the concerns expressed in the Appeal, and squelch any further discussion, with the “knock-out argument” that it is mere “conspiracy theory.” I remember a similar form of reaction and language under the Soviet dictatorship, when dissenters and critics of the prevailing ideology and politics were accused of being complicit in the “conspiracy theory” disseminated by the capitalist West.

The critics of the Appeal refuse to consider the evidence, such as the official mortality rate (for the same time-period) of the 2017-2018 flu season, as compared with the current Covid-19 epidemic in Germany. The mortality rate of the latter is much lower. There are countries with moderate coronavirus security and prevention measures that, due to their implementation, do not have a higher mortality rate. If the mere acknowledgment of the facts, and discussion about them, is labeled as “conspiracy theory,” then anyone who still thinks independently has good reason to be concerned about the possibility that subtle forms of dictatorship exist in our society. As is well known, eliminating or discrediting societal debate and dissenting voices is a chief characteristic of a totalitarian regime, whose main weapon against dissidents are not factual arguments, but rather demagogic and popular rhetoric. Only dictatorships fear objective debate when there are differing opinions.

The Appeal does not deny the existence of an epidemic and the need to fight it. However, some of the security and prevention measures involve imposing forms of complete surveillance over people. Under the pretext of an epidemic, such measures violate fundamental civil liberties and the democratic order of the State. Proposals regarding compulsory vaccination, with no alternative to the state-approved vaccine, and which would inevitably restrict personal liberties, are also very dangerous. Such measures and proposals are accustoming citizens to forms of technocratic and centrally directed tyranny — and civic courage, independent thinking and, above all, any resistance are being severely paralyzed.

One aspect of the security and prevention measures that has been similarly implemented in almost all countries is the drastic ban on public worship. Such bans have only existed in times of systematic Christian persecution. The absolute novelty, however, is that in some places State authorities are even prescribing liturgical norms to the Church, such as the manner of distributing Holy Communion. This is a clear interference in matters that pertain to the immediate authority of the Church. History will one day lament the “regime-clerics” of our time who subserviently accepted such interference by the State. History has always lamented that, in times of great crisis, the majority remained silent and dissenting voices were stifled. Therefore, the Appeal for the Church and the World should at least be given a fair chance to initiate an honest debate, without fear of social and moral reprisals, as befits a democratic society.

May 13, 2020
+ Athanasius Schneider, Auxiliary Bishop of the archdiocese of Saint Mary in Astana

[Comment Guidelines - Click to view]
The Remnant values the comments and input of our visitors. It’s no secret, however, that trolls exist, and trolls can do a lot of damage to a brand. Therefore, our comments are heavily monitored 24/7 by Remnant moderators around the country.  They have been instructed to remove demeaning, hostile, needlessly combative, racist, Christophobic comments, and streams not related to the storyline. Multiple comments from one person under a story are also discouraged. Capitalized sentences or comments will be removed (Internet shouting).
The Remnant comments sections are not designed for frequent personal blogging, on-going debates or theological or other disputes between commenters. Please understand that we pay our writers to defend The Remnant’s editorial positions. We thus acknowledge no moral obligation whatsoever to allow anyone and everyone to try to undermine our editorial policy and create a general nuisance on our website.  Therefore, Remnant moderators reserve the right to edit or remove comments, and comments do not necessarily represent the views of The Remnant.
back to top
Last modified on Thursday, May 14, 2020
Tweet

More in this category: « She Told Us What We Must Do, So Do It! Unmasking the Virus »