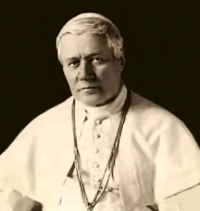 This episode is noteworthy, as Tebartz-van Elst was previously appointed by Pope Benedict to allegedly, “combat ‘progressive’ tendencies in the German church.”[1]

Capitalizing on the Pope’s emphasis on the poor, auxiliary Bishop Robert McElroy of San Francisco, in an October 21st article in America Magazine, suggested that poverty was an equivalent moral issue to abortion. He stated:

If the Catholic Church is truly to be a “church for the poor” in the United States, it must elevate the issue of poverty to the very top of its political agenda, establishing poverty alongside abortion as the pre-eminent moral issues the Catholic community pursues at this moment in our nation’s history.[2]

In addition, Bishop McElroy also implied that opposition to certain progressive government welfare programs and tax policies is a sin:

Along these same lines, Bishop Robert Lynch of St. Petersburg, Florida lashed out at Pro-Life groups in August, equating the issue of abortion to the issue of “food aid” as well as immigration and the death penalty:

I am convinced that many so called Pro-Life groups are not really pro-life but merely anti-abortion. We heard nothing from the heavy hitters in the prolife movement in the last week when Florida last night executed a man on death row for 34 years having been diagnosed as a severe schizophrenic. Which personality did the state execute? Many priests grow weary of continual calls to action for legislative support for abortion and contraception related issues but nothing for immigration reform, food aid, and capital punishment.[4]

It goes without saying that few Catholics, Traditional or otherwise, would look kindly on a bishop spending forty million dollars to upgrade his residence. Similarly, few Catholics would deny that we have an obligation to assist those in genuine material need. To do so would be to deny the very teachings of Christ Himself regarding the corporal works of mercy. However, with all of the recent focus and elevation of poverty as the premiere issue in the Church, we would do well to remember that the mission of the Church is not to eliminate poverty on earth, but to save souls. Christ Himself told us that the former mission is impossible: “The poor you will have with you always”[6]; while the latter mission is essential.

We also should remember that the Communists, especially in Latin American democracies, have historically exploited the problem of poverty.  Fundamental Marxist tactics have always involved stirring up anger at the injustice of poverty and directing it towards the affluent ruling classes. The infiltrating Communists then foment a class-war with the intention of overthrowing the existing government, promising a worker’s paradise to those who assist in the effort. As we have seen, however, once the Communists seize power, they have no need of their former impoverished workers. They then live just as their former affluent rulers did, except with poverty further expanded instead of eradicated.

In implementing their ideology over the last century, Communists have unfortunately found friends in idealistic Catholic priests who, inspired by the Communist’s false affection for the poor, have developed an entire “liberation theology” around the issue. Even assuming the best of intentions on their part, these priests have often served as unwitting facilitators of Communist propaganda. For “Liberation Theology” caricatures true Catholicism, transforming it into a mere religious arm of Marxism.

This Marxist “god” of poverty should be examined even more closely in the United States. In this country, those considered below the “poverty line” and worthy of assistance by the government, often have a higher standard of living than the middle class and even the “rich” in some third world countries.  According to a U.S. Census Report released in September, the following was true of American households in “poverty” in 2011: 97.8% had refrigerators, 96.6% had gas or electric stoves, 96.1% had televisions, 93.2% had microwaves, 83% had some sort of DVR, 80.9% had cell phones along with their landline phones, and 58.2% had computers.[7] With these statistics in mind, can we, as Catholics, truly argue that these “impoverished” individuals are entitled to the same victim status as aborted children? Similarly, can we say that failure to support government welfare programs for these people is the moral equivalent of supporting pro-abortion politicians?

In addition to poverty, the virtue of humility has been focused on recently to a great degree. The message has been clear that humility and poverty are intertwined. The idea has been put forward that, to be a truly humble churchman, one must eschew everything of value to the point of refusing the natural accoutrements of one's office; even to the point of refusing those things donated and sacrificed for that office by Catholics over the span of two millennia.

In contrast to this narrative, I’d like to propose a different Catholic view of humility and poverty. I’d like to do so by telling a story. There once was a boy who grew up as the son of a postman. He was very poor and one of eight children. Knowing that his parents had no money to afford new shoes, he carried his own shoes on his back during long commutes to and from school to save them from wear. This boy would later become a simple country priest before eventually being elected pope over his own protests. Afterwards he would be embarrassed by the pomp of the papal court. “Look how they have dressed me up,” he would say in tears to an old friend. To another, “It is a penance to be forced to accept all these practices. They lead me around surrounded by soldiers like Jesus when he was seized in Gethsemane.”

Yet accept them as penances he did. He knew that all of this pomp was not for him, but for the office of Christ’s vicar to which the faithful longed to show their generosity and adulation. For by honoring Christ’s vicar they honored Christ Himself. In this same vein, he spared no expense on his Divine Lord as he encouraged giving Him only what was most beautiful in art, architecture, and music.

Though very generous to the poor, at one time filling the Apostolic Palace with refugees from an earthquake, poverty was not the focus of his pontificate. Instead his focus was the eradication of error from the Church as well as purity of doctrine and worship. For he knew these things were essential to the Church’s mission of saving souls and must always take priority. Nevertheless he lived such an interior life of poverty and humility, it inspired him to write the words, “I was born poor, I have lived poor, I wish to die poor” on his last will and testament.  This great man was Pope St. Pius X.