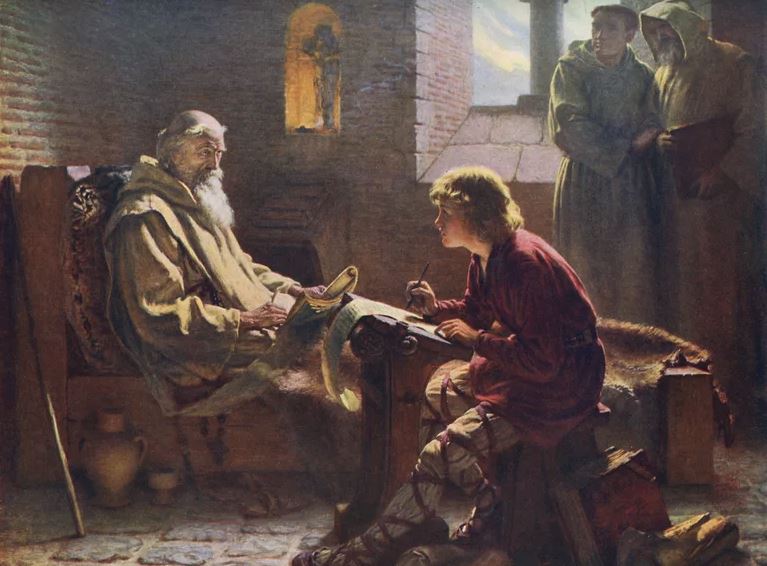 St. Bede was born in northern England in the year 673. At the age of seven, he was sent, as an oblate, to a nearby monastery. In 686 the plague struck, and only two surviving monks were capable of singing the full offices; one was Bede, about 13 years old at the time. When he was only19, he was ordained a deacon by the bishop of his diocese. He became a priest at the age of 30.

St. Bede was a gifted teacher and scholar. He was considered the most learned man of his time. A student of his became the teacher of Alcuin, the famous teacher in the time of Charlemagne. He wrote over 60 books on a large variety of subjects. His most famous work is the Ecclesiastical History of the English People. He also helped establish the practice of dating from the birth of Christ.

Except for a few visits to other monasteries, his life was spent in observance of the monastic discipline. St. Bede died on Ascension Thursday in the year 735, on the floor of his cell, singing the Glory Be.

He was called Venerable because of his reputation for holiness, and his cult became widespread in England and on the Continent within a century. In 1899 Pope Leo XIII declared him a Doctor of the Church. He is the only native of England who has been given this title. He is also the only Englishman in Dante's Paradiso, in the same canto as St. Isidore of Seville.

St. Bede the Venerable, pray for us.

[Comment Guidelines - Click to view]
The Remnant values the comments and input of our visitors. It’s no secret, however, that trolls exist, and trolls can do a lot of damage to a brand. Therefore, our comments are heavily monitored 24/7 by Remnant moderators around the country.  They have been instructed to remove demeaning, hostile, needlessly combative, racist, Christophobic comments, and streams not related to the storyline. Multiple comments from one person under a story are also discouraged. Capitalized sentences or comments will be removed (Internet shouting).
The Remnant comments sections are not designed for frequent personal blogging, on-going debates or theological or other disputes between commenters. Please understand that we pay our writers to defend The Remnant’s editorial positions. We thus acknowledge no moral obligation whatsoever to allow anyone and everyone to try to undermine our editorial policy and create a general nuisance on our website.  Therefore, Remnant moderators reserve the right to edit or remove comments, and comments do not necessarily represent the views of The Remnant.
back to top
Last modified on Monday, May 27, 2019
Tweet

More in this category: « The Fidelity of the City of Rome to the Mass of the Ages NOTRE DAME WINS: Iconic French Cathedral to be Faithfully Restored »