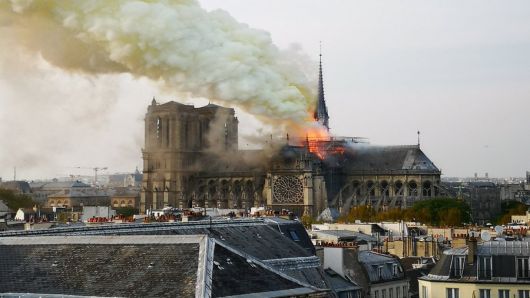 Update: Since first posting this report of the fire at Notre Dame, the situation is obviously much worse now, as the old Cathedral is burning out of control. Who or what is behind this unthinkable tragedy remains to be seen and is not for us about which to speculate. For the moment in all of its horror, we can only offer our prayers, thoughts and tears to our French brothers and sisters who, in many ways, are watching part of themselves burn to the ground. Along with them, we are devastated beyond words. Notre Dame, Reine de France, priez pour nous tous. MJM

A fire broke out at Notre Dame Cathedral in central Paris on Monday afternoon, a spokesman from the fire department said.

Smoke could be seen billowing out from the top of the medieval cathedral, as flames leaped out besides its two bell towers, a Reuters witness said.

A major operation was under way, the fire department added, while a city hall spokesman said on Twitter that the area was being cleared.

This story is developing. Please check back for updates.
Our Lady, Queen of France, defend and protect the poor and suffering "eldest daughter" of your Son's Church.  God help us all.
Published in Remnant Articles

[Comment Guidelines - Click to view]
The Remnant values the comments and input of our visitors. It’s no secret, however, that trolls exist, and trolls can do a lot of damage to a brand. Therefore, our comments are heavily monitored 24/7 by Remnant moderators around the country.  They have been instructed to remove demeaning, hostile, needlessly combative, racist, Christophobic comments, and streams not related to the storyline. Multiple comments from one person under a story are also discouraged. Capitalized sentences or comments will be removed (Internet shouting).
The Remnant comments sections are not designed for frequent personal blogging, on-going debates or theological or other disputes between commenters. Please understand that we pay our writers to defend The Remnant’s editorial positions. We thus acknowledge no moral obligation whatsoever to allow anyone and everyone to try to undermine our editorial policy and create a general nuisance on our website.  Therefore, Remnant moderators reserve the right to edit or remove comments, and comments do not necessarily represent the views of The Remnant.
back to top
Last modified on Wednesday, April 17, 2019
Tweet