A JUSTICE FOR ALL SEASONS: Clarence Thomas v. Jimmy Martin 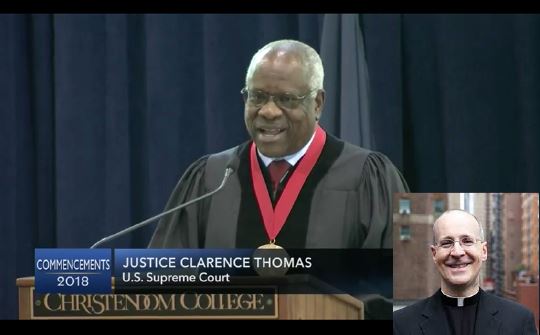 This is a decidedly Catholic Institution, and I am decidedly and unapologetically Catholic.  ~Justice Thomas

Back in May, during Christendom College's Class of 2018 graduation exercises, Supreme Court Associate Justice Clarence Thomas delivered a commencement address for the ages.

When I first watched it, I was left speechless, moved to tears, in fact. My wife and I are alumni of Christendom College, and for us this speech may just be our proudest Christendom moment.

But there's more to it than that. For those interested in gaining a better understanding of what we Catholics have lost over the past fifty years, this speech by a Catholic gentleman and scholar of the old school, formed in the last days of the old Church, is just the ticket.

Justice Thomas's gravitas, his wisdom, his sensus Catholicus is the stuff that built mighty Christendom, history’s greatest civilization--the stuff that inspired history's heroes, philosophers, crusaders and forgotten martyrs down through the ages.  It's the stuff that makes the Catholic spirit soar with pride and emulation, as if to say: My Church formed this moral, spiritual and intellectual giant!

The old traditional Catholic Faith formed the mind and soul of Clarence Thomas, as he humbly admits in the speech below—the old Faith and his fidelity to it. And I wonder if, after his generation passes, we shall see such men come this way again. A pox on Vatican II for daring to "reform" the Church that formed such men!

Gather the children around, friends, turn up the volume, and watch this perfect intersection of traditional Catholic faith, humility, love and learning:

My grandmother used to say that comparisons are odious. Still, having watched Justice Thomas I can’t help but to compare this Catholic Marc Antony to the fops and fools running around lose in the Church today.

If Justice Thomas personifies the robust and healthy Catholicism of yesterday, Fr. James Martin personifies its moral and spiritual decay.

One last word: It’s Christmas, and we posted the above address as a little Christmas gift to the visitors of this website from around the world. If you prefer tears of joy this Christmas Eve to tears of rage, then go no further. Let Clarence Thomas’s words wash over you like a balm for the soul, and don’t watch this next video.

I include it merely as a sobering reminder of things to come if the Catholic Church does not stir herself and go back to her glorious future, recalled so fondly by Justice Thomas from when he was a boy.

To get an idea of the kind of squalid semi-heretical, blasphemous rot this little man shared with the Class of 2018 at Loyola University one need only start watching from 14:00 on and for however long the stomach can take it. Here's Father Jimmy "the Heretic" Martin:

No worries, though; this too shall pass. At the moment there are a mere 600 views of the Loyola 2018 commencement address by Jim Martin (the graduating class and their parents and grandparents?). Obviously, there's little interest in such anti-Catholic blathering, which is new and exciting only to the most uninformed students of history. In a few years, the world will have forgotten all about him.

Justice Thomas's speech, on the other hand, was picked up by C-Span and has been viewed by tens if not hundreds of thousands. The old warrior pilgrim had something to say, you see, and that something will never grow old, will never die, but will continue to resonate throughout the world until Christ comes again.

Published in Remnant Articles
[Comment Guidelines - Click to view]
The Remnant values the comments and input of our visitors. It’s no secret, however, that trolls exist, and trolls can do a lot of damage to a brand. Therefore, our comments are heavily monitored 24/7 by Remnant moderators around the country.  They have been instructed to remove demeaning, hostile, needlessly combative, racist, Christophobic comments, and streams not related to the storyline. Multiple comments from one person under a story are also discouraged. Capitalized sentences or comments will be removed (Internet shouting).
The Remnant comments sections are not designed for frequent personal blogging, on-going debates or theological or other disputes between commenters. Please understand that we pay our writers to defend The Remnant’s editorial positions. We thus acknowledge no moral obligation whatsoever to allow anyone and everyone to try to undermine our editorial policy and create a general nuisance on our website.  Therefore, Remnant moderators reserve the right to edit or remove comments, and comments do not necessarily represent the views of The Remnant.
back to top
Last modified on Monday, December 24, 2018
Tweet

More in this category: « Remembering Who We Are…Hope in the Midst of the Ruins of Our Culture Lighting the Lamps of the Worldwide Remnant »