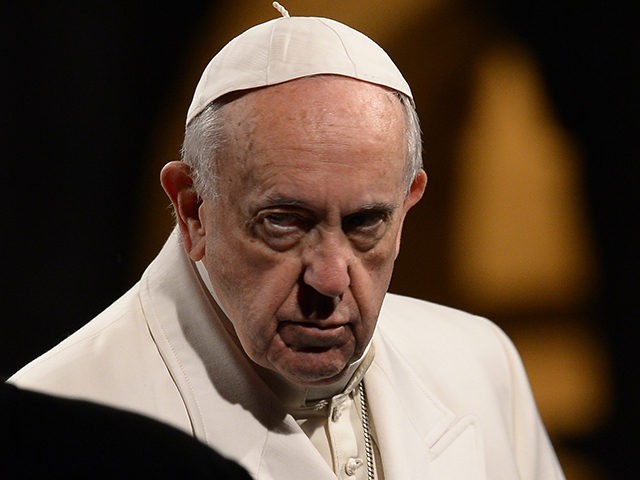 The Fall of Francis?

Now that nearly three months have passed since the MOAB (Mother of All Bombs) was dropped on the Francis pontificate by Archbishop Carlo Maria Viganò, it is time to assess what can be gleaned from the Vatican response about the accuracy of the Viganò charges.

Remnant readers will recall that, within hours of the release of Viganò ’s Testimony, Pope Francis personally issued his own non-answer to the charges. For all with all eyes to see, he inadvertently confirmed the very “conspiracy of silence” detailed by Archbishop Viganò in his initial testimony.

Pope Francis uttered the astonishing words, “I will not say a single word about this.” What? Surely, this Pope of Mercy understands the pain and suffering of clergy abuse victims anxiously awaiting an appropriate papal response to the McCarrick predation?

Apparently, not.  Instead, Francis stunned them with his silence and apparent indifference, thus adding fuel to the fires of accusation of a papal coverup while providing even more evidence of papal complicity.

Apparently, the pontiff from ‘the ends of the earth’ just doesn’t get it. His dismissive response to the damning allegations against then-Cardinal McCarrick greatly strengthens the Viganò case. Francis refused to refute any of the charges leveled against him by a most credible witness. Not a one.

Imagine a corporate CEO refusing to address detailed accusations of malfeasance and cover up leveled against him by an insider whistleblower. If said CEO responded as Francis did, he’d be gone in twenty-four hours. But the papal hubris on display at 30,000 feet is made all the worse by the fact that this scandal is not about faulty airbags or dirty restaurants. This is about the predatory sexual assaults of a cardinal on young males and seminarians.

Perhaps Bergoglio needs the USCCB VIRTUS® refresher course. Even Catholic school janitors understand that, for the protection of children, if there is a credible allegation of sexual abuse it must be reported to authorities and investigated.

The VIRTUS lesson plan might have come in handy with all the clergy abuse victims that Francis ignored while still Cardinal Archbishop of Buenos Aires and, later, as Pope, with the substantiated allegations against his pal Bishop Barros, Fr. Grassi, Fr. Inzoli, Fr. Capozzi, to name just a few.

Beatriz Varela is an Argentine woman whose son suffered sexual abuse at the hands of a Buenos Aires priest where Francis once served as the cardinal. Varela said the Francis ignored victims of sexual abuse while welcoming celebrities like Leonardo DiCaprio with open arms.

“He receives all the celebrities, like Leonardo DiCaprio, and opens his door to them. And for us, not even a quick letter to say he was sorry.”

Sounding more like a Borgia Pope, Francis castigated those people that accuse clerics and bishops of sexual abuse as being like Satan, “the Great Accuser.” That medieval attitude and stance will land you in jail in America.

In classic Bergoglian foot dragging, the USCCB was forced to wait a month following the Viganò accusations before the Pope granted a meeting with the American delegation of Cardinals DiNardo, O’Malley and Archbishop Gomez. The long-awaited meeting was for the purpose of requesting an apostolic visitation to investigate the charges surrounding McCarrick’s serial predation.

Having learned his lesson from the disastrous Barros Apostolic Visitation, which forced a papal public apology over his personal mishandling of the scandal, Francis refused to grant an Apostolic Visitation into the McCarrick sex abuse allegations. Instead—and this can only be described as a public insult to victims and concerned Catholics--the Vatican: 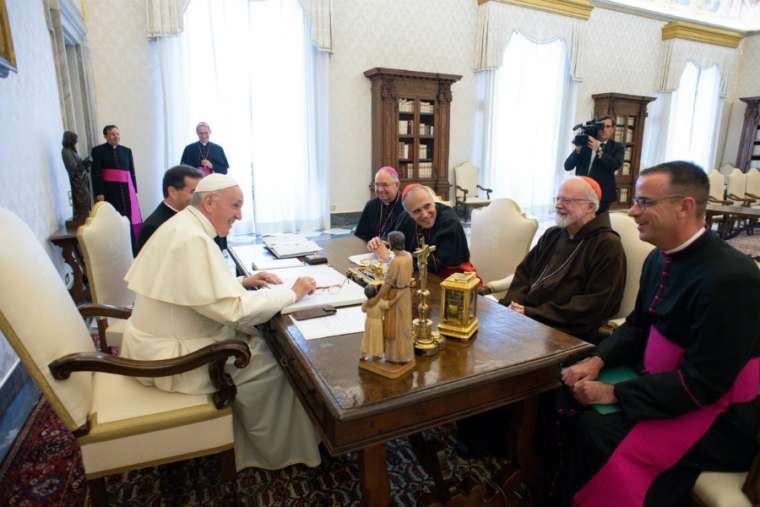 Communications Office released a photo of that meeting with all the participants laughing along with the Pope. This insulting photo sent a strong message that the Vatican does not take these allegations seriously.

The photo served as a finger in the eye to American Catholics and clergy abuse victims and it further bolsters Viganò’ s allegation that the Vatican isn’t appreciating the enormity of the McCarrick scandal. How troubling that Francis is unwilling to permit an apostolic visitation which would reveal the full extent of the sexual misconduct of McCarrick and those that protected him. Optics matter. Just view Cardinal Kevin

Despite 15 Attorney General investigations (and 2 federal grand jury investigations) into McCarrick and the clergy abuse scandals, the Pope shows no interest or inclination to clean up his own house. His obstinate inaction and total lack of transparency further confirms Viganò’ s allegation of a conspiracy of silence with Francis at the center of the plot.

From the moment he stepped out onto the Loggia in 2013, Francis has been stonewalling, slow walking, and dismissing serious allegations of clerical sex abuse in the clergy.  It’s the Argentine way.

V.S. Naipaul captures the culture of Argentines in his book, The Return of Eva Peron:

“It is the Argentine attitude: suppress, ignore. There is no history in Argentina. There are no archives; There are only graffiti and polemics and school lessons.”

The Francis papacy seems fashioned after the tyranny of his hero, Juan Peron. As Bergoglio systemically and successfully ignored and suppressed the cries of clerical sex abuse victims in Buenos Aires, he is adopting a similar attitude now as Pope.

While returning from his ill-fated Ireland visit, Francis commented further to the reporters about the Viganò allegations:

Make our own judgment?

Viganò is telling the truth.

Elizabeth Yore is an international child protection attorney who has investigated many clergy abuse cases.

[Comment Guidelines - Click to view]
The Remnant values the comments and input of our visitors. It’s no secret, however, that trolls exist, and trolls can do a lot of damage to a brand. Therefore, our comments are heavily monitored 24/7 by Remnant moderators around the country.  They have been instructed to remove demeaning, hostile, needlessly combative, racist, Christophobic comments, and streams not related to the storyline. Multiple comments from one person under a story are also discouraged. Capitalized sentences or comments will be removed (Internet shouting).
The Remnant comments sections are not designed for frequent personal blogging, on-going debates or theological or other disputes between commenters. Please understand that we pay our writers to defend The Remnant’s editorial positions. We thus acknowledge no moral obligation whatsoever to allow anyone and everyone to try to undermine our editorial policy and create a general nuisance on our website.  Therefore, Remnant moderators reserve the right to edit or remove comments, and comments do not necessarily represent the views of The Remnant.
back to top
Last modified on Tuesday, November 6, 2018
Tweet
More in this category: « CIC2018 Video On-Demand Preview | Sign up TODAY The Modernist Takeover of the Catholic Church: Cultural Genocide or Suicide? »