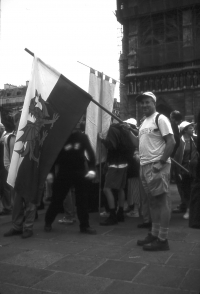 Editor’s Note: I wrote these few words 14 years ago, the day after the death of my friend Michael Davies on September 25, 2004. Those wishing to learn more about this premier traditional Catholic layman can read the entire eulogy HERE. For over 30 years Michael Davies wrote a bi-weekly column for The Remnant called, simply, “A Letter from London.” May he rest in peace. MJM

Though he was not martyred, the name Davies can surely and without hesitation be placed alongside those of More, Fisher and Campion, as men who gave their lives to the defense of the Holy, Roman Catholic Church in times of great upheaval.

With all my heart I believe this to be true and am convinced that history will concur. In terms of sheer positive impact on souls languishing in a revolution-wracked Church, I can think of no layman who served more loyally or confirmed the brethren more steadfastly. He knew history and he understood the perils of our own time in the context of history.

He also knew that we are presently engaged in a pitched battle against forces of darkness, against which, humanly speaking, we are no match since the Catholic Church has fallen. He knew well that, under such circumstances, even the strongest faith will wither if hope is lost.

And so his tireless task was to keep Hope alive, convinced that a childlike confidence in a good God is the best antidote for the poisons of despair, ambition, presumption and pride that hell has injected into the bloodstream of the modern world.

Like Newman and Chesterton before him, Michael Davies chose this Faith…he wasn’t born into it. And after making that choice, he, like them, dedicated his life to the unflagging defense of its every doctrine and dogma, tenet and creed, rubric and sacred prayer. And this is what we’d do well to always remember about him—he chose to be a traditional Catholic and would have died for that choice.

The former Anglican knew well that Roman Catholics possess the pearl of great price; ours was the religion that successfully carried saints and kings, gentlemen and scholars, soldiers and peasants through this vale of tears for two thousand years since Christ walked with men. We, then, are the fortunate ones…and neither fabricated liturgies nor cockamamie Councils can change that triumphant reality. We have no excuse to abandon Hope!

And so, as Michael always sought to be useful, let’s put his memory to good use. Let’s remember him happily as the mighty lion of Tradition, the jovial son of Wales, the great Catholic who inspired tears of love and tears of laughter, who helped us believe in the only things that really matter, and who kept hope burning bright even in the darkest night. In the end, he showed us how to finish this race, fight the good fight, and keep the old Faith.

With fond remembrance and gladness at having known him and called him friend, we bid adieu and Godspeed to Michael Davies, one of the greatest Defenders of the Faith who ever lived.

Cheers, Sir. Thanks for everything! And, don’t worry—we’ll not forget what you’ve done for us and for our children. As Harry the King might have said, your story shall the good man teach his son. And Tradition shall ne'er go by from this day to the ending of the world.  You ran the good race, you kept the old Faith, may you now rest in peace. Amen 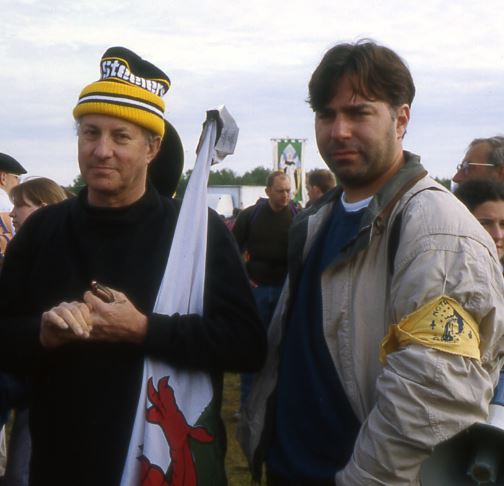 Michael Davies and Michael Matt on Pilgrimage to Chartres, a long time ago...

End Note
Any one who is fortunate enough to be worshipping regularly at the Tridentine Mass these days may see fit to consider that, were it not for the groundwork of Michael Davies, there may not be many such Masses left to attend anywhere in the world.  Would it not be right and fitting, then, for each of us to vow here and now to have one such Mass offered for the repose of his soul? I can think of no more fitting way to repay the debt we owe the man who spent thirty-five years teaching us about the “most beautiful thing this side of heaven” and showing us all how to keep ourselves and our children on the narrow path that leads to everlasting life…despite the Revolution of Vatican II.

[Comment Guidelines - Click to view]
The Remnant values the comments and input of our visitors. It’s no secret, however, that trolls exist, and trolls can do a lot of damage to a brand. Therefore, our comments are heavily monitored 24/7 by Remnant moderators around the country.  They have been instructed to remove demeaning, hostile, needlessly combative, racist, Christophobic comments, and streams not related to the storyline. Multiple comments from one person under a story are also discouraged. Capitalized sentences or comments will be removed (Internet shouting).
The Remnant comments sections are not designed for frequent personal blogging, on-going debates or theological or other disputes between commenters. Please understand that we pay our writers to defend The Remnant’s editorial positions. We thus acknowledge no moral obligation whatsoever to allow anyone and everyone to try to undermine our editorial policy and create a general nuisance on our website.  Therefore, Remnant moderators reserve the right to edit or remove comments, and comments do not necessarily represent the views of The Remnant.
back to top
Last modified on Tuesday, September 25, 2018
Tweet

More in this category: « Francis Pulls Another Bergoglio: Sells Out Chinese Catholics APOCALYPTIC POPE: Another Fruit of Vatican II »