US Bishops Blast Trump, Wimp Out on Abortion 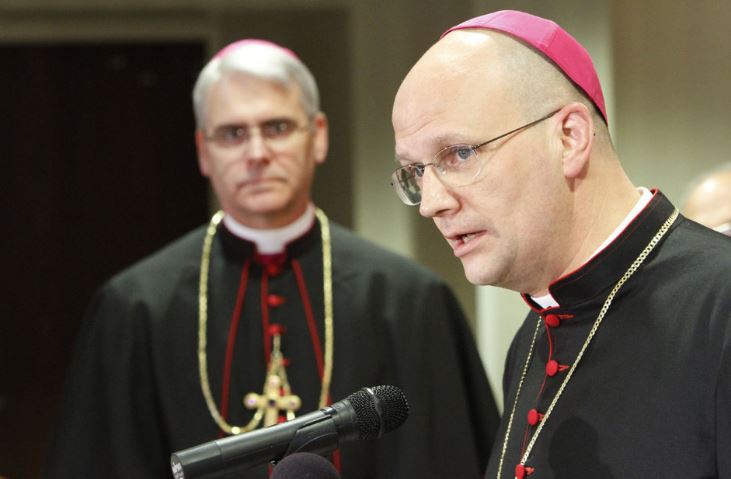 Bishop Edward Weisenburger (right) would like to canonically punish those who advocate the prosecution of illegal immigrants.

On June 13, Daniel Cardinal DiNardo, archbishop of Galveston and Houston and head of the United States Conference of Catholic Bishops, read aloud a statement at the USCCB spring meeting in which he denounced the immigration policies of United States President Donald Trump and Attorney General of the United States Jeff Sessions. Cardinal DiNardo was particularly exercised by Trump’s and Sessions’ policy of refusing asylum to those fleeing gang violence, and of prosecuting everyone who illegally enters the United States, a practice which could potentially separate children from their criminal parents.

According to a Religion News Service (RNS) report, “DiNardo asked bishops to clap if they approved the statement. The room erupted in applause.”

Other bishops wanted to do more than just clap. “Bishop Edward Weisenburger of Tucson, Ariz., [suggested] implementing canonical penalties for Catholics ‘who are involved in this’, referring to children being separated from their families at the border. […] ‘For the salvation of these people’s souls, maybe it’s time for us to look at canonical penalties.’” Since 1973, more than sixty million of my countrymen have been murdered by abortionists. To the best of my knowledge, no “canonical penalties” have ever been levied against the politicians “who are involved in this,” or the hundreds of millions of people who have participated in “children being separated from their families” by voting for candidates and political parties with pro-abortion platforms. During the 2016 presidential election, for example, the USCCB did not dare to suggest that Catholics who voted for Hillary Clinton might be met with “canonical penalties” for their endorsement of a woman whose position on in utero homicide can perhaps best be described as “triumphalist”.

During the years that sixty million Americans were being vivisected in the womb, the American Church has been overrun by scofflaws. The Church now wants to excommunicate those who say enough is enough. But enough was enough a long time ago. I have gone to confession and been unable to hear the priest because of the electric guitar mariachi band practicing in front of the tabernacle. I have arrived at Mass to find the pews and aisles strewn with glitter and confetti from the “ethnic” service beforehand. I know of priests, nuns, and other church officials who have actively conspired with illegal aliens to help them break the law, such as by forging documents, obstructing justice, and concealing crimes. (When all this was reported to the local bishop, no action was taken.) I have seen church buildings slowly destroyed: items stolen, restrooms vandalized, drywall demolished, common areas left looking like the bivouacs of a conquering horde.

The same thing has happened to my country, but on a much larger scale.

Entire towns are overrun by illegals.

Hospital emergency rooms are filled with them. Insured taxpayers must wait, often with fatal results, while those who laugh at our laws and are fattened by money expropriated from our paychecks get priority medical attention at our expense. Poor Americans cannot find work because illegals have swarmed all the entry-level positions. Barbaric gangs throng our schools and our jails, and their appalling violence spills out into our streets. We are under siege.

But the bishops are oddly silent about all this. More than silent—those who sound the alarm about the dangerous lawlessness and abuse of goodwill within the Church in the United States are accused, with no hint of irony, of themselves being “cruel” and “hardhearted”. What could possibly explain the failure of the USCCB to impose “canonical penalties” on those who participate in infanticide, and the standing ovation that the USCCB reserves for those who insist that the invasion of the United States across the southern border be intensified? How did such moral cowards—who said nothing when sacred vestments were used in a pornography program at the Met [see page 11 of this edition for The Remnant'stake on this event]—suddenly summon such pluck?

We are mistaken if we continue to see the USCCB, or even the Vatican, as a religious organization. It is nothing of the sort. It is a purely political body which does not limit itself to verbal advocacy of anti-American, anticivilizational positions, but proactively defies legitimate laws, undermines social order, promotes anarchy, and leads millions of faithful astray by blasphemously attempting to endue political subversion with ecclesiastical penalties having eternal consequences.

In short, the Vatican is a rogue state, and the USCCB is its agent. There is nothing even faintly religious about it.

But due process does not guarantee purity of heart going forward. Bergoglio may have been put into office by a properly constituted conclave, but he has taken advantage of the naivete (and the willful ignorance) of the College of Cardinals and a reliable gaggle of obsequious bishops to carry out a modernist revolution from within St. Peter’s. Francis’ is the Manchurian Papacy. He is not the vicar of Christ, but of George Soros. He does the bidding of those who are determined to end national sovereignty and institute One World Government, a socialist mega-state that would be the culmination of the modernists’ thousand-year project. The endless flood of invaders into the United States is just one part of an Argentinian communist’s attack on government, good order, and patriotic sentiment. The Hungarian Captivity of the Church is the single most pressing crisis of our day, and Catholics must wake up and refuse to comply with a Church that, God help us, follows globalist madmen and not the Good Shepherd (Who, let us remember, knew how to keep the wolves out).

To answer the USCCB: defending one’s homeland from invasion is not a sin.

Preferring the health of one’s family and one’s community to the reintroduction of dread diseases like tuberculosis, bubonic plague, polio, diphtheria, cholera, and leprosy is not inhumane. Building a wall and keeping violent criminals, human traffickers, pimps, rapists, and drug smugglers on the other side of it is not cruel. Being a Catholic and being a sucker are two different things. Or, I should say, they used to be.

This article appears in Remnant Newspaper's "Mega" June issue. Subscribe  for more, or see what we're all about by requesting a free copy of this issue! 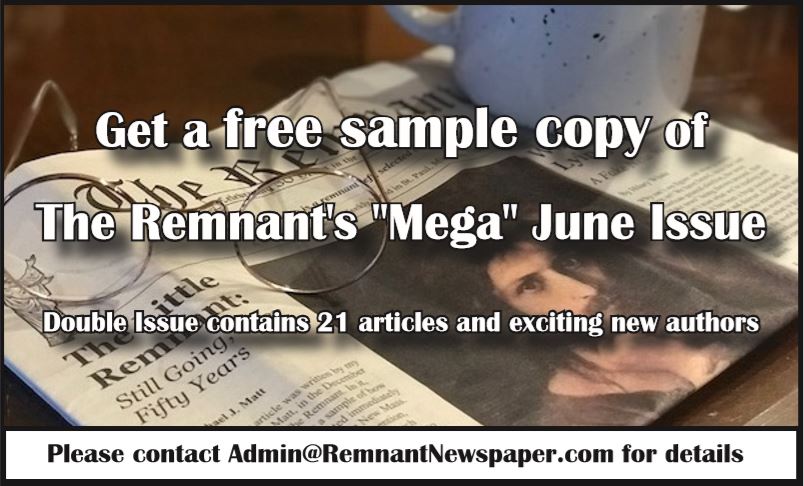 Published in Remnant Articles
[Comment Guidelines - Click to view]
The Remnant values the comments and input of our visitors. It’s no secret, however, that trolls exist, and trolls can do a lot of damage to a brand. Therefore, our comments are heavily monitored 24/7 by Remnant moderators around the country.  They have been instructed to remove demeaning, hostile, needlessly combative, racist, Christophobic comments, and streams not related to the storyline. Multiple comments from one person under a story are also discouraged. Capitalized sentences or comments will be removed (Internet shouting).
The Remnant comments sections are not designed for frequent personal blogging, on-going debates or theological or other disputes between commenters. Please understand that we pay our writers to defend The Remnant’s editorial positions. We thus acknowledge no moral obligation whatsoever to allow anyone and everyone to try to undermine our editorial policy and create a general nuisance on our website.  Therefore, Remnant moderators reserve the right to edit or remove comments, and comments do not necessarily represent the views of The Remnant.
back to top
Last modified on Tuesday, July 10, 2018
Tweet
More in this category: « Catholic Identity Conference 2018, Official Website Launch LEAGUE of the SACRED HEART, Michael Matt Responds to Critics »