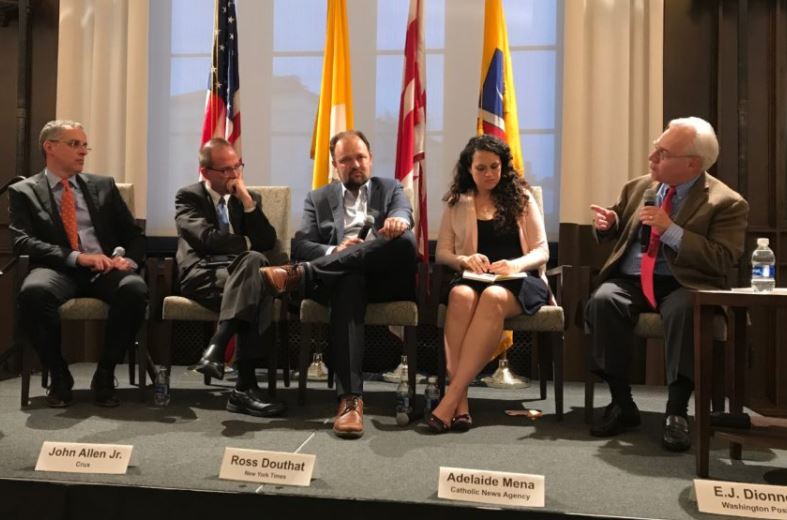 On Wednesday, April 25th, 2018, The Institute for Human Ecology and The Catholic University of America hosted a panel discussion with media experts on the pontificate of Pope Francis, on the anniversary of the fifth year of his papacy. Dr. Joseph Capizzi, the executive director of The Institute for Human Ecology, moderated the discussion. The media representatives were John L. Allen Jr., the editor of Crux and a specialist in coverage of the Vatican; Ross Douthat, an Op-Ed Columnist for the New York Times; Adelaide Mena, a freelance journalist and consultant based in Washington, DC and currently working for Catholic News Agency (CNA/EWTN); and E.J. Dionne, a columnist for the Washington Post, professor at the University of Georgetown, and author of the book One Nation After Trump: A Guide for the Perplexed, the Disillusioned, the Desperate, and the Not-Yet Deported.

The panelists discussed from the standpoint of journalism and the media several issues relevant to the Church and the papacy of Pope Francis. The major topics which the panelists tackled were the difficulties facing Catholic journalists writing about their own Church, the so-called “Francis Effect” upon mass attendance, ordinations, conversions and the like, and the hotly-debated issue of divorce and remarriage.

The first topic of discussion addressed by the panel focused on the ways in which Catholics approach writing about the pope. The panelists collectively agreed that the best way to approach writing about the pope was to treat him as one would any other world leader: deserving of respect but personally fallible. Mr. Douthat explained that Catholic journalists have a difficult job in that they must learn how to balance reporting news and defending the Church. Mr. Douthat began as a columnist at the New York Times in 2008, when the Church was in the middle of a new wave of sex scandals; he had the difficult task of reporting on the scandals and criticizing the leadership of the Church for the ways in which they handled them while at the same time wanting to defend the Church as a whole to an audience with a very negative view of the institution. It is often, he pointed out, difficult to balance journalism with personal piety.

When asked if they felt that the attitude toward reporting on the Church had changed throughout the last few decades, Mr. Allen and Mr. Dionne both agreed that while the pace of journalism has changed, due to the technological advances of the twenty-first century, the material has not changed much. Mr. Douthat added that that he believed that the attitude had changed greatly. The sex abuse crisis, he pointed out, had played a large role in shaping the willingness of conservatives to criticize the Church and even the pope himself. Prior to the council, he said, the attitude of conservatives – particularly conservative members of the media – was much more deferential to the papacy; but much of that deference died between 2001 and 2010, when the scandals dominated the news. 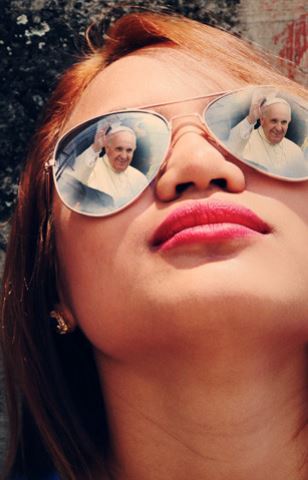 Mr. Capizzi then turned the conversation to the second major topic of the evening: the so-called “Francis Effect” which much of the media had hoped to see when Cardinal Bergoglio became Pope Francis. Bergoglio was seen as being humble, straightforward, humorous, and he was admired for “leading with mercy rather than with doctrine.” The hope, said Capizzi, was that his new attitude would bring people into the Church and reawaken those who were on “cruise control” within the Church. Have we seen the “Francis Effect”?

Ms. Mena’s answer was that we must look at statistics within the next five to ten years, because five years into the papacy, it is too soon to tell. She did add that the ordinations in the United States have gone down from 590 last year to 430 this year – a 27% decrease – yet she maintained that in the long-run it is too soon to tell what the effects of the current pontificate will be on such things as mass attendance, ordinations, consecrations, conversions and the like. According to Ms. Mena, the real Francis Effect is related to the outlook of the Church and the Catholic world on the Catholic Global North versus the Catholic Global South. While she admitted that this is not generally what is meant by the “Francis Effect” as the term is used by the mainstream media, Ms. Mena suggested that Pope Francis’ origins in South America will have some effect in calling attention to the problems facing the southern hemisphere.

Mr. Allen, for his part, believed that it was misguided to expect that such things as ordinations, consecrations, conversions, and mass attendance are dependent upon solely one person, even if that person should be the pope. There are many variables that could affect these statistics. According to Mr. Allen, however, there has definitely been a “Francis Effect,” even though we cannot say that it relates to the aforementioned statistics. To begin with, the media, even the secular media, is completely in love with the current pontiff. Because of this, Mr. Allen claimed, his opinions on matters are being heard by the secular media in a way that the opinions of previous pontiffs were not heard. Pope Francis has, as Mr. Allen put it, “captured the imagination of the entire world,” and because of this, he is becoming a point of consultation on moral matters both in Catholic and non-Catholic populations.

Mr. Dionne, who identified himself as the most enthusiastic Francis-supporter on the panel, agreed with Ms. Mena that one of the biggest effects of the current papacy is the way in which the pope has brought the cultures and problems of the global south into the spotlight. Mr. Dionne said that what Pope Francis believes about poverty and global injustices is not inconsistent with the beliefs of his predecessors; they are merely higher priorities for him. Mr. Dionne praised Pope Francis for his deep affection for traditional forms of piety and his enormous respect for popular piety, Marian devotions, personal devotions, and the like.

The third major topic of discussion, that of divorce and remarriage, generated more controversy and disagreement within the panel. Mr. Douthat explained that his biggest disappointment with the papacy of Pope Francis is that, despite his supposed love for the global south and desire to bring its problems to light in the Church, the pope has accomplished little on this score. Instead, Mr. Douthat said, he has been most successful in creating confusion and uncertainty over issues on which Church teaching had previously been considered certain and unequivocal; the most conspicuous example of these being the question of divorce and remarriage.

Mr. Dionne jumped to the defense of Pope Francis, saying that he has not changed any Church doctrine on the question of divorce and remarriage, but is calling for greater consideration of particular cases and also for a decentralizing of power on the issue. The pope’s outlook upon divorce and remarriage, Mr. Dionne said, is consistent with the central theme of his papacy: mercy. Why should an abused woman who left her abusing husband and remarried be banned from communion when a murderer may confess once and then go to communion again? The Church’s view towards marriage and divorce, Mr. Dionne stressed, has never been a straight line; it has always taken twists and turns, and this new look into the issue under the current pontificate is not unprecedented.

Ms. Mena then posed the question which continued to be discussed until the end of the evening: is the question of divorce, remarriage, and the reception of communion truly a Francis-based issue or can it in fact be traced historically back to Pope John Paul II’s apostolic exhortation Familiaris Consortio on the role of marriage and the family in the Church? (NB: According to Familiaris Consortio, two people who have married after divorcing their spouses must live together as brother and sister if they wish to remain in good standing in the Church and continue to receive the sacraments.)

Mr. Douthat pointed out that there is a big leap from saying that the divorced and remarried may live together as brother and sister and permitting them to live as husband and wife and receive communion. He traced the current laxity toward Church teaching on divorce and remarriage to a liberalized, overly-permissive policy toward the annulment process, which has led to Catholics to believe that an annulment is simply unnecessary. It is, he claimed, beginning to be hard to see any difference between the Catholic Church’s position on divorce and the secular position on divorce, and he suggested it will soon be easier to return to communion after a remarriage than it will be to get a civil divorce.

Mr. Allen and Mr. Douthat agreed that not only does Amoris Laetitia not say that divorced and remarried couples must live together as brother and sister; it is, in fact, explicitly critical of that notion.

[Comment Guidelines - Click to view]
The Remnant values the comments and input of our visitors. It’s no secret, however, that trolls exist, and trolls can do a lot of damage to a brand. Therefore, our comments are heavily monitored 24/7 by Remnant moderators around the country.  They have been instructed to remove demeaning, hostile, needlessly combative, racist, Christophobic comments, and streams not related to the storyline. Multiple comments from one person under a story are also discouraged. Capitalized sentences or comments will be removed (Internet shouting).
The Remnant comments sections are not designed for frequent personal blogging, on-going debates or theological or other disputes between commenters. Please understand that we pay our writers to defend The Remnant’s editorial positions. We thus acknowledge no moral obligation whatsoever to allow anyone and everyone to try to undermine our editorial policy and create a general nuisance on our website.  Therefore, Remnant moderators reserve the right to edit or remove comments, and comments do not necessarily represent the views of The Remnant.
back to top
Last modified on Saturday, April 28, 2018
Tweet