A New Year Prediction: Vatican Will Greenlight ‘Gay Unions’ in 2018 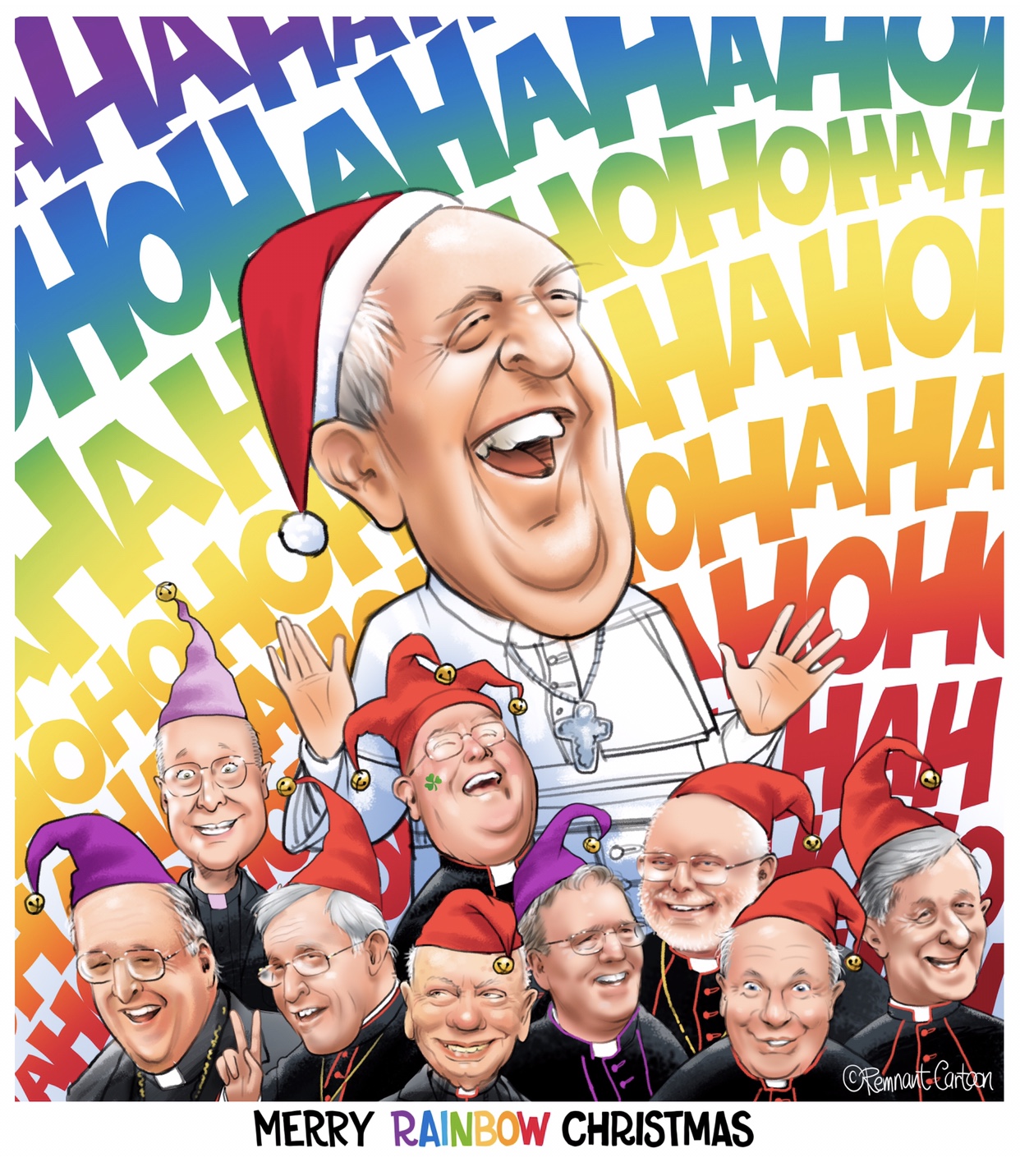 Happy New Year!  First, the good news: the world didn’t end in 2017.  We’re still here, and unless something cataclysmic happens in the next few hours, we're evidently to be spared our much-deserved Divine chastisement...at least this year.

The bad news?  We Catholics still have the leadership we deserve. The newly christened ‘dictator pope’ may have started at the bottom but over the course of 2017 he seems to have found a way to go down. In fact, his papal expedition to theological La La Land has its sights set on October 2018--the much dreaded Synod of Young People.

So, to the prediction: I predict that before this New Year comes to an end, Pope Francis and his band of merry men will—either directly or indirectly—find a way to give at least tacit approval of so-called “gay unions”.

At a press conference at the Vatican which I covered in person during the last Synod, Cardinal Peter Turkson promised that the question of "gay unions" would be taken up at the next Synod. They're playing it down at the moment, but I stick to my prediction that "gay unions" will be the bombshell of the 2018 Synod.

I make this prediction not to be provocative but rather because I truly believe this is coming. As I see it, we Catholics have got only a few months in which to make up our minds: Are we going to go along with the calculated destruction of the human element of Christ’s Church, or are we going to stand and resist?

Admittedly, this is a tough call for those who’ve spent their lives laboring under the false impression that, to the man, modern Popes are saints in waiting, whose every whim is inspired by God and thus beyond reproach—an attitude which bears no resemblance to the Church’s actual theology of the papacy, of course, but there you have it.  This is what many neo-Catholics believe, and I fear they are going to have that belief shaken to its core when October’s World Synod of Bishops on Young People finds a way to more or less endorse the legitimacy of “gay unions.”

There is little doubt in my mind that this is going to happen. It’s going to be done in the name of mercy, of course, on a case-by-case basis and it will be subject to individual conscience and pastoral sensitivity.  Ultimately, it will be "justified" at the Synod on the basis of data being collected even now from Vatican surveys of the world’s young people. It takes a village, and this will be "for the children".

During his unsettling address in St. Mary Major back on April 8, 2017, Pope Francis set the stage for these and whatever other massive youth-driven changes he decides to impose in 2018:

This evening marks a double beginning.  It is the beginning of the journey towards the Synod, which has a very long name – “Young People, the Faith and Vocational Discernment”, but we can just call it the Synod of Young People.  That way it is easier to understand!  It is also a second beginning, the beginning of our journey to Panama.  The Archbishop of Panama is with us, and I greet him warmly.

We have listened to the Gospel, prayed, sung and brought flowers to the Madonna, our Mother.  We also brought the World Youth Day cross, which has come from Kraków and will be handed over tomorrow to the young people from Panama.  From Kraków to Panama, with the Synod in between.  A Synod from which no young person should feel excluded!

Never mind that Catholic youth today have nothing to say since they are being taught nothing Catholic and thus know nothing Catholic, the Pope is still going to consult them—the most under educated (and ill-catechized) Catholics in history.  He’s then going to do whatever they want, because what they want is what he wants—no more rules, just a “love and mercy” overload from the God of Surprises.

And the 2018 Synod will be all about sex, which is why the Vatican needs the input of the most over-sexed generation in history—the folks intentionally brought to a level of ignorance of moral theology and the Precepts of the Church so alarming that they no longer know what they are or what it means to be Catholic.

A recent RTV short video features Archbishop Alexander Sample rightly decrying the fact that Catholic young people today are so lost they don’t even know who they are anymore:

In his comments on this year-long Vatican consultation with the world’s intentionally dumbed-down Catholic youth, Voice of the Family’s Matthew McCusker observes:

We foresee the Synod Secretariat presenting requests from ‘young people’ for changes in Catholic doctrine and practice, which will then be presented as evidence that the Church needs to change her fundamental beliefs. The ‘young people’ in question can, of course, be preselected and manipulated to serve predetermined ends”…

Faithful Catholics must prepare themselves for the inevitable escalation of this new assault on the Church, in which her own ill-catechized and malformed youth will be used against her. Those who control the mechanisms of power in the Vatican have given ample of proof of the extent to which they will go to spread their own perverted and distorted ‘gospel,’ in the place of the true gospel revealed once and for all by Our Lord Jesus Christ.”

Using this same modus operandi, the Vatican will find a way to legitimize gay unions in the 2018 Synod, just as the synods on the family found a way to do the same where public adulterers are concerned. In fact, this merciful outreach to folks in "irregular" relationships will likely be presented as a Vatican defense of Christian marriage as between one man and one woman. "Yes, let's not call gay unions 'marriage', as that would be inappropriate. Let us call them what they are: 'gay unions'." And, voila, the deed is done. The Vatican just indirectly recognized gay unions as legitimate, and the slippery slope will quickly morph into a black diamond run.

Never going to happen?  Dear God, I hope not, but after all we’ve seen from Francis’s Vatican thus far, only a fool would never say never. And even if one wishes to be foolish and go the Jimmy Akin route, please ask yourself this: What are you going to do if you’re wrong? Will you go along with it? Next Christmas, will you be adding your voice of approval to the Vatican’s de facto blessing of sodomitical relationships?

And if this prediction comes true, and the Vatican manages to ramrod acceptance of “gay unions” through, not one of us will be able to conscientiously object (on religious grounds) when the secularist hate hunters come after us, our small universities, our home-schools, our local pastors for teaching the traditional Catholic moral theology. Forget about cake makers! We'll all be facing charges.

If Catholics don’t stand up and ‘resist Peter to his face’, 2018 may well go down in infamy as the year when the pope became instrumental in forcing faithful Catholics to accept and approve one of the four sins that cries to heaven for vengeance.  (According to the traditional teaching of the Church, including the new Catechism of the Catholic Church, those sins have been categorized as four distinct heinous acts: willful murder, the sin of Sodom, oppression of the poor, and defrauding laborers of their wages.)

On the other hand, if the neo-Catholics finally wake up and join the Traditional Catholic counterrevolution, who knows—history may cite 2018 as the turning point…the beginning of the end of the Modernist Crisis in the Catholic Church.  If not, then buckle up!

Let’s pray for just such a massive Catholic awakening between now and next October. In many ways, it is beginning to happen already, here and there. But will it continue and, in any case, will it be too little too late? Stay tuned.

Our Lady of Fatima, pray for us.

Please support The Remnant in 2018 by purchasing a gift subscription or making a donation.

[Comment Guidelines - Click to view]
The Remnant values the comments and input of our visitors. It’s no secret, however, that trolls exist, and trolls can do a lot of damage to a brand. Therefore, our comments are heavily monitored 24/7 by Remnant moderators around the country.  They have been instructed to remove demeaning, hostile, needlessly combative, racist, Christophobic comments, and streams not related to the storyline. Multiple comments from one person under a story are also discouraged. Capitalized sentences or comments will be removed (Internet shouting).
The Remnant comments sections are not designed for frequent personal blogging, on-going debates or theological or other disputes between commenters. Please understand that we pay our writers to defend The Remnant’s editorial positions. We thus acknowledge no moral obligation whatsoever to allow anyone and everyone to try to undermine our editorial policy and create a general nuisance on our website.  Therefore, Remnant moderators reserve the right to edit or remove comments, and comments do not necessarily represent the views of The Remnant.
Last modified on Monday, January 1, 2018