Part 1: The Grinch Who Stole the Pro-life Movement 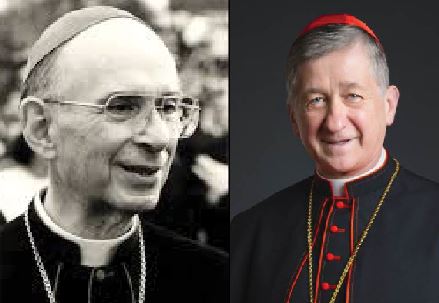 Get out the Bartles and Jaymes and White Zinfandel because America Magazine and its legion of hipster Catholics are tickled pink that Cardinal Blaise Cupich has attempted to reboot the seamless garment cunningly crafted by the late Cardinal Joseph Bernardin. In his article “Can the ‘seamless garment’ approach to pro-life issues make a comeback in the Catholic Church?” Michael J. O’Loughlin, a devotee of Pope Francis who wrote the fawning tribute to the Argentinian menace, called The Tweetable Pope: A Spiritual Revolution in 140 Characters, presents the case that the “tip of the spear” of the Francis Church in America is Cardinal Blaise Cupich who will restore the spirit of the “old school,” old liberal American Church that Cardinal Bernardin had built.

Since one of the core issues of conservative and traditional American Catholics is abortion, if Cardinal Cupich can coopt the pro-life movement then he can, as Cardinal Bernardin did, diffuse the resistance to Cardinal Cupich’s other liberal and unCatholic policies. As a result, Cardinal Bernardin’s seminal speech, “A Consistent Ethic of Life,” deserves to be resurrected from the graveyard of the 1980s church in which the old liberals reigned supreme, for in it we will find the blueprint for Cardinal Cupich’s plan to wake the terrible old ghost of Cardinal Joseph Bernardin.

Cardinal Bernardin achieved his successful coup against the pro-life movement in his ingeniously engineered 1983 Gannon Lecture at Fordham University, “A Consistent Ethic of Life: An American-Catholic Dialogue,” given on St. Nicholas’s feast day.

Bernardin took the occasion of speaking at Fordham to clarify and expand upon the American Bishops’ pastoral letter, “The Challenge of Peace: God's Promise and Our Response,” a full frontal attack on the Reagan administration’s aggressive approach to Soviet Communism released earlier that year. The bishops were not very happy that the soft spoken Georgian Jimmy Carter had lost the 1980 election. However, Cardinal Bernardin, in many ways, a deviously brilliant man, took the opportunity to attack and coopt the prolife movement in America and thus provide the blueprint for support for Democratic politicians who would be up for election next year in 1984.

Despite Bernardin’s attempt, the Republicans, led by the Gipper himself, won a landslide in 1984. However, Cardinal Bernardin’s seamless garment would come back like Marley’s ghost in “A Christmas Carol” to haunt the prolife movement in the Clinton and Obama eras.

In “A Consistent Ethic of Life,” we see all the hallmarks of the Bernardin-era, post-Vatican II American Church. Citing Fr. John Courtney Murray, SJ, ironically, the godfather of the Catholic neocons by name, Cardinal Bernardin argues that the Church must “dialogue” with American liberalism and provide one of the voices in what neocon Richard John Neuhaus would call in his famous book the following year (1984), “The Naked Public Square.” For Cardinal Bernardin, “the Catholic moral tradition” merely has “something valuable to say” in the public square; she is not a teacher who can command her followers’ obedience. Thus the Church has no moral authority in the public square; she can only offer suggestions, advice, and opinions—even to Catholic politicians and voters.

In contrast to Our Lord’s admonition to hate the world and St. Paul’s warning in the “Letter to the Ephesians” that Christians must resist the world, Cardinal Bernardin, true to form, argues in “A Consistent Ethic of Life” that the bishops’ pastoral letter, “The Challenge of Peace,” followed “the model of the Second Vatican Council which called dialogue with the world a sign of love for the world.” Again, Bernardin is making it perfectly clear that he is ready to make a deal with the devil and compromise with the world. In fact, His Eminence seems to think this compromise was the mandate of Vatican II.

Warning against being “divisive,” Bernardin’s rhetorical method in “A Consistent Ethic of Life,” is to utilize the oldest dirty trick in the old liberal playbook, popularized by postmodern philosophical charlatans like Jacques Derrida: hiding the plain, commonsensical truth behind mystifying language.

Avoiding direct and clear speech, Cardinal Bernardin says that the Catholic teachings on abortion as a damnable evil as well as the right for nations to defend themselves contain “intrinsic intellectual difficulties.” He further does not condemn abortion as murder but timidly says, “the taking of even one human life is a momentous event.” Bernardin, a very intelligent man and gifted wordsmith, knows very well that the word “momentous” is a dog whistle word to his pro-choice audience that says, in effect, it is OK to have an abortion sometimes even though it might be kind of bad.

He even says that the “traditional Catholic teaching” is that there “should always be a presumption against taking human life…”; however, “in a limited world marked by the effects of sin there are some narrowly defined exceptions where life can be taken.” Again, this is coded language indicating that it is wrong to have an abortion, but there are, of course, “exceptions” to the rule, for, as Bernardin later says, we live in a modern world “in which a new context shapes the content of our ethic of life.”

Again we have the liberation theology, Marxist method of saying that something can be bad but still be allowable in praxis. Not to beat a dead horse, Cardinal Bernardin tells his audience (who knows exactly what he means) that moral decisions like abortion are “enormously complicated, and deserving individual [of] treatment.” The phrase “complicated” is one frequently used by pro-choice Catholics to describe the decision to kill one’s child in utero. Cardinal Bernardin never condemns or uses the language of sin and judgement but rather argues his “opposition” to abortion. The message that Cardinal Bernardin conveys, ever so subtly, is that it is bad in principle to have an abortion but, then again, it is a complicated situation in which every individual case must be examined.

Cardinal Bernardin’s descriptions of the procedure of abortion are very cunningly crafted to avoid condemnation and allow loopholes. Bernardin says, “it is because the fetus is judged to be both human and not an aggressor that Catholic teaching concludes that direct attack on fetal life is always wrong.” Note this wording here: Bernardin intentionally used the word “judged” instead of himself proclaiming that the fetus is human. Also, His Eminence goes out of his way to state that the fetus is judged “not to be an aggressor.” Today, it is precisely this argument that is used by the pro-choice lobby to argue for abortion. The fetus is now “judged” to be an aggressor and parasite on the woman who needs to terminate it in order to get back into the workforce. Don’t think for a moment that Cardinal Bernardin didn’t know that how a fetus was “judged” was going to eventually be changed.

Cardinal Bernardin further argues that abortion is just one of many issues, including providing social services for “the old and the young, the hungry and the homeless, the undocumented immigrant and the unemployed worker…” Perhaps some of these issues are open to discussion by well-meaning Catholics, but Bernardin’s goal is to conflate the moral level of the murder of unborn children with the socialist imperative of high taxes on the rich. His Eminence further argues that “the viability” of the ethic of life “depends upon the consistency of its application.” Thus, if a Catholic politician does not condemn both abortion and nuclear war and support social services for illegal immigrants and socialist “job creations,” he or she is not truly pro-life, and, as a result, a Catholic American is not obligated to vote for him or her. By this logic, a Catholic could also vote for a Ted Kennedy-esque prochoice Catholic politician who advocated for socialist medicine.

In “A Consistent Ethic of Life,” Cardinal Bernardin also very interestingly shows us how he and other old liberals viewed the notorious “development of doctrine” idea and how they exploited some of John Paul II’s softening of Church teaching. Approvingly citing John Paul II’s opposition to the death penalty in most cases, Cardinal Bernardin tries to take the next step and try to forbid the death penalty altogether. The late Cardinal did the very same thing with the “liturgical time bombs” implanted in the Novus Ordo, introducing communion in the hand and other novelties as logical extensions of officially approved changes in the mass.

If Cardinal Bernardin's “A Consistent Ethic of Life,” is going to be the blueprint for the old liberals’ revenge under Cardinal Cupich, we have been warned.

Cardinal Blase Cupich is neither as gifted a writer, thinker or as skilled at the John le Carré-esque game of church politik as Cardinal Bernardin—he also (hopefully) does not have the same skeletons in his closet as Cardinal Bernardin. As Cardinal Cupich rolls out the “consistent of ethic of life” argument, we can be sure that is another attempt to neutralize the pro-life movement and provide cover for Catholics to vote for pro-choice but socially liberal candidates.

However, ironically, by adopting the Cardinal Bernardin method, Cardinal Cupich and our friends at America are behind the times. With the Acta Apostolicae Sedis’s recent publications of Pope Francis’ letter to the Bishops of Argentina approving of Catholics in a state of mortal sin to receive communion, Pope Francis has dispensed with the pretense and subtlety of the Bernardin Era old liberals and has declared open war on Catholic tradition and teaching. Nevertheless, unlike during the catacomb days of the traditional movement during the 1970s and 1980s, traditional Catholics do not have to hide out on the periphery while the Church is being quietly demolished from within. We have a powerful voice in the public sphere, and it is time that we make it heard.

*Stay tuned for the next installment of The Old Liberal Holiday Special: The Ghosts of Cardinal Bernardin’s Christmas Past (WITH SPECIAL GUEST FR. JAMES “SANTA’S LITTLE HELPER” MARTIN).

More in this category: « APOCALYPSE NOW: The Romans Are Coming Again SEXUAL HARASSMENT: Legacy of the Sexual Revolution »