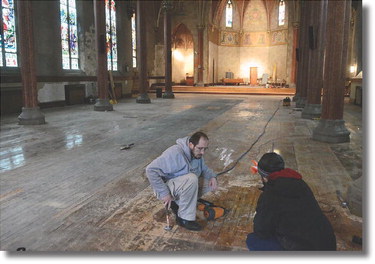 A few weeks ago America experienced a horrific mass shooting at a music concert by a radical Islamist; a few days ago we suffered through another horrific shooting, this time at a Baptist church by an avowed atheist. Both were acts of terrorism and both should be categorized as hate crimes; but they will not be, because Moslems and Atheists are both protected species whereas country music rednecks and main stream Christians count for little or nothing in the estimation of this diabolically disoriented world.

Those who know Church history are not surprised by the recent rampage of this atheist. After all, since apostolic times the Catholic Church and Christians have been hated by the fallen world—abstract for the moment that the attack was against a Protestant sect; after all, in the mind of the murderer he viewed his victims as Christians. Most seasoned pastors have had personal encounters with antagonists, anti-Catholic bigots and various unstable individuals who are capable of doing all sorts of things to hurt the Church.

I know of one pastor, for instance, who with the best of intentions and for good reason dared to change his weekend Mass times by a mere 15 minutes. The next weekend there were death threats against him, written with sidewalk chalk on the steps leading up to the entry of his church. I myself once received an anonymous card that read, “Thinking of You” on the outside, only to find inside various threats against me that were written using cut out letters from magazines, something like a serial murderer would do.

Still another pastor I know was warned by bigoted bully neighbors that if he ever rang his church bells again they would kill him. The very next Sunday the pastor announced from the pulpit that he would stop ringing the church bells—once they had pried his cold dead fingers off the bell rope by which he rang it!

Contrast the fortitude of this pastor with the fecklessness of many bishops, whose irrational response to unlawful violence against the innocent is to declare all church property to be Gun Free Zones. Rather than posting signs with a gun ban symbol, it would be more accurate to post an image of a smoking gun and declare churches and chanceries to be Protection Free Zones. As for my own church and campus, my parishioners know that lawful guns are welcome and most of my ushers are packing. Beware, bad guys!

But let’s go back to the bell-ringing pastor who refused to submit to enemies of the Church. He faithfully rang those bells until his last day as pastor; sadly, within a year of his forced departure, the church bells went silent. What happened? The next pastor was progressive and preferred to see dollar signs than to hear church bells. So he struck a shady deal with some eager infidels—aka Moslems—who were quite happy to buy the church and convert it into a mosque. As part of the deal the pastor agreed to tear down the rooftop cross, tear out the stained glass windows, remove all statues and sacred items and, of course, topple the bell tower. In its place now rises to the heavens a minaret tower, chanting the praises of Allah.

What did the local diocese think of this? Well, as any good canonist can tell you, churches and church property cannot be sold or destroyed without episcopal permission; so clearly the bishop had concurred. The irony in this is so thick that it could not be cut by a scimitar sword: it was not the enemies from without that stopped the church bells from ringing but the traitors from within, for a big bag of silver.

This column has appeared in every issue of The Remnant for the past ten years. 99% of them never appear online. Subscribe and catch Fr. Celatus' Last Word every week!

What happened in this particular parish is not an anomaly but is becoming increasingly widespread. Just how prevalent the sale of churches is to Moslems is hard to calculate, as bishops strike their dirty deals with infidels in the darkness of secrecy and mainstream media does not want to alarm the public. Have no doubt, though, that the acquisition of churches by Moslems is part of a larger jihad strategy to conquer Western societies. If The Last Word were to put a name to it, we would call it Operation Hagia Sophia.

Hagia Sophia are Greek words meaning Holy Wisdom and is the title that was given to the church that was first constructed by the Emperor Constantine in the fourth century and subsequently significantly expanded under later Roman Emperors. It was the first official church of the Roman Empire and later served as the principal basilica for the Greek Orthodox Church. That is, until the invasion of Islam.

In 1453 AD the city of Constantinople fell to attacking Ottoman forces and the conquering sultan allowed his Moslem troops three days of unrestrained pillaging and looting in the city, to include the Hagia Sophia. The infidel invaders believed it contained great treasures and so the edifice was stormed and desecrated. Many of the faithful had assembled inside for sanctuary, only to be raped, put to death or carried off into slavery. Priests and religious were killed as well and Christian prayer was put to an end. In its place an ulama recited Moslem prayers and so began the conversion of the great church into a mosque.

For 1,000 years the Hagia Sophia was the largest cathedral church in the world. It was one of the earliest masterpieces of Byzantine architecture and is one of the few wonders of the world still standing. But its bells were silenced and its towers were toppled long ago, to be replaced with muaddhins and minarets. It now serves as a museum in modern day Turkey but it should serve as a warning to Christians about Islam.

Just as surely as the invading forces of the Ottoman Empire conquered Christians and converted churches into mosques, so will the new invading forces of immigrants and refugees do as their ancestors did long ago. Only this time it need not be accomplished with the sword but rather with a pen—political pens that open up borders to enemies of freedom and episcopal pens that sign away churches and church property.

In centuries past, popes and pastors called the faithful to their knees and to war to oppose the forces of Islam. Now they call for unconditional surrender with unfettered borders and inter-religious dialogue. Prepare yourself, America, for the babel of Islamic calls to prayer, coming soon from minarets of former churches near you.

God save us from popes and bishops and pastors who have sold us out to the infidels!

[Comment Guidelines - Click to view]
The Remnant values the comments and input of our visitors. It’s no secret, however, that trolls exist, and trolls can do a lot of damage to a brand. Therefore, our comments are heavily monitored 24/7 by Remnant moderators around the country.  They have been instructed to remove demeaning, hostile, needlessly combative, racist, Christophobic comments, and streams not related to the storyline. Multiple comments from one person under a story are also discouraged. Capitalized sentences or comments will be removed (Internet shouting).
The Remnant comments sections are not designed for frequent personal blogging, on-going debates or theological or other disputes between commenters. Please understand that we pay our writers to defend The Remnant’s editorial positions. We thus acknowledge no moral obligation whatsoever to allow anyone and everyone to try to undermine our editorial policy and create a general nuisance on our website.  Therefore, Remnant moderators reserve the right to edit or remove comments, and comments do not necessarily represent the views of The Remnant.
back to top
Last modified on Saturday, November 25, 2017
Tweet
More in this category: « Say Goodbye to Hollywood, the Beatles & Bugnini True or False: There are Three Great Monotheistic Religions in the World Today »