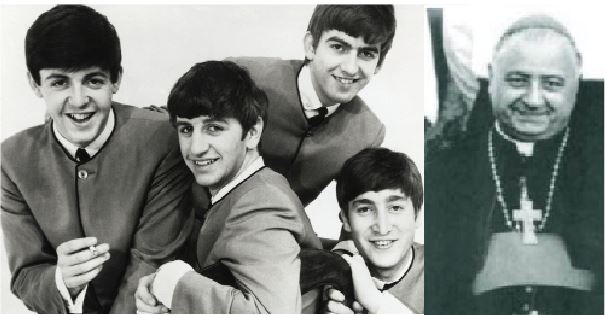 In the wake of the movie mogul Harvey Weinstein sex scandal, Hollywood's dark and nasty underbelly is finally beginning to show.  From down in the catacombs Michael Matt talks pop culture, pointing  out how early Traditional Catholics were just as concerned about the rock 'n' roll and Hollywood-driven Sexual Revolution as they were the liturgical revolution of Vatican II. Pope Pius XI issued an encyclical warning against the motion picture industry way back in 1939.  Were Catholics of the past just paranoid, or have post-Vatican II Catholics of today simply lost the ability to recognize evil when we see it?  Now we have prominent cardinals in Rome eulogizing gender-benders such as David Bowie, while Neo-Catholics hope and pray that AC/I DC  guitarist Malcolm Young is now "playing before the throne of God."

When, exactly, did the Catholic Church agree to an unconditional surrender to the cultural gods of the wasteland?

[Comment Guidelines - Click to view]
The Remnant values the comments and input of our visitors. It’s no secret, however, that trolls exist, and trolls can do a lot of damage to a brand. Therefore, our comments are heavily monitored 24/7 by Remnant moderators around the country.  They have been instructed to remove demeaning, hostile, needlessly combative, racist, Christophobic comments, and streams not related to the storyline. Multiple comments from one person under a story are also discouraged. Capitalized sentences or comments will be removed (Internet shouting).
The Remnant comments sections are not designed for frequent personal blogging, on-going debates or theological or other disputes between commenters. Please understand that we pay our writers to defend The Remnant’s editorial positions. We thus acknowledge no moral obligation whatsoever to allow anyone and everyone to try to undermine our editorial policy and create a general nuisance on our website.  Therefore, Remnant moderators reserve the right to edit or remove comments, and comments do not necessarily represent the views of The Remnant.
back to top
Last modified on Friday, November 24, 2017
Tweet
More in this category: « LUTHER'S POPE: Vatican Stamp of Approval of Protestant Revolt? Operation Hagia Sophia »