When Jesuits and Popes Dance With the Devil 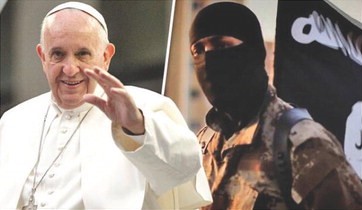 Years ago I was brought in as a priest to a psych ward in a VA hospital to work with a suicidal Vietnam veteran. His family was convinced that the root of his problem was not merely mental but diabolical. After spending some time with the tormented veteran, I agreed that something diabolical was at work. One thing I remember the veteran saying was that he “danced with the devil.” I shudder at the thought!

So I prayed the Rosary with him, taught him the prayer to Saint Michael the Archangel and enrolled him in the scapular. For a while he seemed better but then one day he hanged himself in the hospital. He was rescued before he died and as he was wheeled away a priest noticed the scapular and gave him absolution. The veteran died shortly after and I am hopeful the Blessed Mother saved his poor soul from the devil.

We should never underestimate the unsurpassable power of prayer and sacramentals but neither should we underestimate the powerful preternatural activity of the demons. If that veteran was, in fact, diabolically obsessed then it is no wonder that he was so suicidal and intent upon destroying himself.

But not all people believe in the devil. Take, for instance, the recent comment by the Superior General of the Jesuits: “We have formed symbolic figures such as the devil to express evil. Social conditioning can also represent this figure, since there are people who act [in an evil way] because they are in an environment where it is difficult to act to the contrary.” Predictably the Jesuits are spinning his denial.

Bad enough that a Superior General does not believe in the devil but remember that another prominent Jesuit denied damnation: “There is no punishment, but the annihilation of that soul. All the others will participate in the beatitude of living in the presence of the Father. The souls that are annihilated will not take part in that banquet; with the death of the body their journey is finished.” So said Francis of Rome.

No wonder the Vatican regime has now so tightly aligned itself with diabolically driven suicidal causes, including its obsession with massive Islamic immigration—jihad invasion— of a radical religion whose adherents are determined to preside over the final demise of western culture and Christianity. Can we not say that these reckless advocates of such a suicidal cause are “dancing with the devil?”

How else can we explain the diabolical disorientation that has so completely infested the institutional Church and western society? How else can we make sense of the suicidal strategy of ecclesiastical and political leaders to collapse western culture and Christianity through an overwhelming Islamic invasion? Consider this list of documented Islamic terrorist attacks that have occurred the past few years in Europe:

Notice that the higher the Moslem immigration rate the greater the frequency of Islamic terrorist attacks.

This article appeared in the last print edition of The Remnant.
To see what else you missed, subscribe today!

In addition to these terrorist attacks consider these headlines related to other Islamic jihadist behavior:

Though few in number, there is a small faithful remnant among the modernist Black Robes (and White Robe) who have not embraced the diabolical disorientation that so widely afflicts the Church and the world. One notable exception is Father Henri Boulad, a former Provincial of Jesuits in Egypt, who knows from his personal experience and scholarly study the extreme danger that Islam inherently represents.

In an interview with the National Catholic Register, Father Boulad stated that “Islam is an open ended declaration of war against non-Muslims” and that Islamic “extremists are just applying what their religion teaches them to do.” In a personal letter to the wayward Jesuit, Francis of Rome, Father Boulad wrote:

“It seems to me that — on the pretext of openness, tolerance and Christian charity — the Catholic Church has fallen into the trap of the liberal left ideology which is destroying the West. Anything that does not espouse this ideology is immediately stigmatized in the name of “political correctness”. Many think that a certain number of your positions are aligned with this ideology and that, from complacency, you go from concessions to concessions and compromises in compromises at the expense of the truth.”

In support of his contention that Islam is inherently intolerant and violent, Father quotes from the Koran:

The evidence is overwhelming, expressed in texts of the Koran and headlines of the world, that Islam is an intolerant and dangerous religion that demands complete submission and crushes all opposition. Only someone dancing with the devil would be so suicidal as to welcome the spread of such a diabolical force. If Jorge Bergoglio wants to swap his zucchetto for a fez and Hillary Clinton wants to hide her face under a burka so be it, but as for The Last Word, we remain faithful to the one true religion and the one true God.

[Comment Guidelines - Click to view]
The Remnant values the comments and input of our visitors. It’s no secret, however, that trolls exist, and trolls can do a lot of damage to a brand. Therefore, our comments are heavily monitored 24/7 by Remnant moderators around the country.  They have been instructed to remove demeaning, hostile, needlessly combative, racist, Christophobic comments, and streams not related to the storyline. Multiple comments from one person under a story are also discouraged. Capitalized sentences or comments will be removed (Internet shouting).
The Remnant comments sections are not designed for frequent personal blogging, on-going debates or theological or other disputes between commenters. Please understand that we pay our writers to defend The Remnant’s editorial positions. We thus acknowledge no moral obligation whatsoever to allow anyone and everyone to try to undermine our editorial policy and create a general nuisance on our website.  Therefore, Remnant moderators reserve the right to edit or remove comments, and comments do not necessarily represent the views of The Remnant.
back to top
Last modified on Monday, July 17, 2017
Tweet
More in this category: « Archbishop Lefebvre and the 50th Anniversary of The Remnant The Garda Interviews: Michael Matt & Edward Pentin, Thomas Pink »