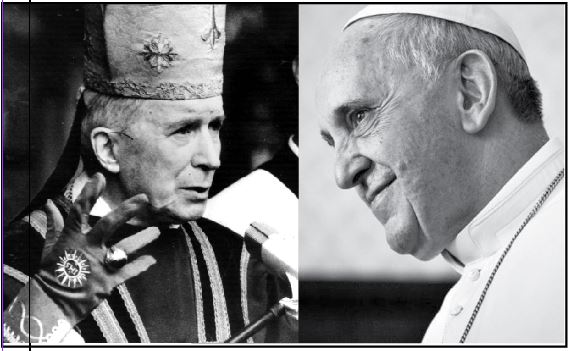 Note: In this article, Father Gleize addresses the question of Church unity, which he shows to be (first and foremost) a unity of Faith, and only afterwards a unity of government. He concludes that a conception of Church unity which would exclude unity of Faith, or put it in second place, would be a legalistic unity, contrary to the very nature of the Church, and more apparent than real. Father Gleize ranks the ecumenical unity dreamed of by Paul VI and John Paul II, and the unity of “full communion” dangled by Rome before the SSPX as such. He concludes that the Vatican's new Profession of Faith cannot form the basis of unity of Faith in the Church, and that, while the preaching and government of the Hierarchy may be deficient at a given point in time, unity of Faith subsists throughout history because it is based on the unchanging Truth taught by the Magisterium.(This article appeared in LE COURRIER DE ROME, May 2017, and can be found in the original French here: http://laportelatine.org/publications/presse/courrier_de_rome/2017/1705cdr599.pdf The subtitles are by the translator, who asks for prayers for himself and his family).

The Church: 'the Mystical Body of Christ'.

The Church, says Pius XII, is “the Mystical Body of Christ”. Not only is the expression legitimate, says the Pope, but it is preferable to any other. “If we would define and describe this true Church of Jesus Christ - which is the One, Holy, Catholic, Apostolic and Roman Church - we shall find nothing more noble, more sublime, or more divine than the expression 'the Mystical Body of Christ' - an expression which springs from and is, as it were, the fair flowering of the repeated teaching of the Sacred Scriptures and the Holy Fathers[1]”.

The profession of Faith: the fundamental bond of Church unity.

This expression 'Mystical Body of Christ' is a revealed metaphorical analogy. Rather than being a precise and scientific definition, it is a description of the mysterious nature of the Church. In this expression, the adjective 'mystical' differentiates the Church both from the physical Body of Christ as well as from the other social bodies of the Natural Order, which are purely juridical in nature. This means that the Church is a society, but that it is not so in exactly the same way as the societies of the Natural Order are. The Church is a “society” of the Supernatural Order, and therefore in an analogical manner. Analogy implies both resemblance and difference. The Church resembles natural societies in that it has a government. But the big difference is that this government first of all presupposes a Magisterium, because the professsion of Faith is the fundamental bond of the Church's social unity. And since Faith is in preparation for eternal salvation (because It is the commencement of salvation), this government also presupposes a power of sanctifying.

Church unity can only arise from the law of belief.

That is why the unity of the Church is not only (or even fundamentally) a unity of government, as is the case in the other societies of the Natural Order. It is also, and firstly, a unity of Faith and Sacraments. As Pope Leo XIII had already said in his Encyclical Satis Cognitum[2], unity of Faith precedes unity of government, just as the agreement and union of intelligences is the foundation of harmony of wills and concord in action. And in the Encyclical Mortalium Animos, Pope Pius XI had also already said: “The disciples of Christ must be united principally by the bond of one Faith. Who then can conceive a Christian Federation, the members of which retain each his own opinions and private judgment, even in matters which concern the object of Faith, even though they be repugnant to the opinions of the rest? (I Tim. II, 5) [...] How so great a variety of opinions can make the way clear to effect the unity of the Church We know not; that unity can only arise from one teaching authority, one law of belief and one Faith of Christians[3].” Pius XI does not only say that Church unity arises from the law of belief; he says that it cannot come about in any other way.

NEW PRINT EDITION OF THE REMNANT includes blockbuster from Archbishop Lefebvre (1976).  Exactly why did he resist and how did he justify his "disobedience"? Subscribe TODAY and find out!

Unity of Faith is caused by the Magisterium.

Pius XI says that this unity of Faith is caused by the Magisterium. Leo XIII clearly affirms the same in the already quoted text[4]. In any case, the divinely instituted hierarchical power therefore remains at the basis of the visible unity of the Church. Nevertheless, there is an absolutely necessary order among the effects which must flow from this principle: the hierarchical power of the Church (that of the Pope and the bishops) must be exercised first and foremost in order to bring about unity of Faith, before then bringing about unity of government. For there can be no unity of government without there first being unity of Faith. This absolutely necessary order caracterizes the very being of the Church, since It is a society of the Supernatural Order. Because It is supernatural, the Church must be defined as the society of the faithful, as a “congregatio fidelium”, that is to say, as the assembly of those who profess the same Faith. The Magisterial power brings about the initial unity of the Church by causing the unity of profession of Faith. The government is the principle of another unity, the unity of government, which is in conformity with the unity of profession of Faith, and therefore with the Magisterium.

To conceive of Church unity as a pure unity of government, from which unity of Faith would be, if not excluded, at least relativised or deemed secondary, would be tantamount to denying the definition of the Church which has been transmitted by Divine Revelation. This unity of pure government would perhaps make the Church a natural society, but the Church is precisely not this. The society which consists in the union of its members with Christ is much more than a simple unity of government; it is a society in the analogical sense, whose unity is firstly (fundamentally and principally) a unity of Faith, the principle of which is the Magisterium.

A unity of government without unity of Faith would, therefore, be a purely legal and legalistic unity, contrary to the very nature of the Church – a unity which would be more apparent than real. Such is the ecumenical unity dreamt of by Paul VI, John Paul II and their successors. Such would also be the unity of “full communion” which the Holy See has been dangling in front of Archbishop Lefebvre's successors for a long time now. Yet, canonical recognition of the Society of Saint Pius X cannot be an act of pure government. It is an act which, in one way or another, will raise the question of the Society's adhesion to the new Magisterium and Vatican II's new Profession of Faith. Both Cardinal Müller's and Archbishop Pozzo's declarations are quite clear in this regard. Yet, Vatican II's new Profession of Faith cannot be the foundation of unity of Faith in the Church, since the questions which it raises are not “open questions”. All the points on which Vatican II wished to “revisit” the Church's Doctrine are points on which discussion is impossible, since the Magisterium has pronounced on them with the full weight of its authority.

The Magisterium: cause of unity of Faith yesterday, today and tomorrow.

Let us add that government can only cause unity in the present moment, in a provisional manner and relative to current circumstances (because it implements laws here and now), whereas the Magisterium causes unity of Faith yesterday, today and tomorrow in a definitive and absolute manner, because the Truth which it teaches (and which is at the basis of unity of Faith) must always stay the same. Unity of Faith, therefore, subsists independently of a potential shortcoming in the preaching and government of the hierarchy in the here and now. It also subsists independently of a purely legalistic conception of “full communion” which wishes to relativise the demands of Divine Revelation. This unity, which is the very unity of the Church, must retain its primacy over any pseudo-canonical arrangements.

Such are the principles which allowed Archbishop Lefebvre to refuse “the Conciliar Church” in the name of the Church and the Magisterium “of all time”.

[Comment Guidelines - Click to view]
The Remnant values the comments and input of our visitors. It’s no secret, however, that trolls exist, and trolls can do a lot of damage to a brand. Therefore, our comments are heavily monitored 24/7 by Remnant moderators around the country.  They have been instructed to remove demeaning, hostile, needlessly combative, racist, Christophobic comments, and streams not related to the storyline. Multiple comments from one person under a story are also discouraged. Capitalized sentences or comments will be removed (Internet shouting).
The Remnant comments sections are not designed for frequent personal blogging, on-going debates or theological or other disputes between commenters. Please understand that we pay our writers to defend The Remnant’s editorial positions. We thus acknowledge no moral obligation whatsoever to allow anyone and everyone to try to undermine our editorial policy and create a general nuisance on our website.  Therefore, Remnant moderators reserve the right to edit or remove comments, and comments do not necessarily represent the views of The Remnant.
back to top
Last modified on Friday, July 7, 2017
Tweet
More in this category: « SACRED HEART OF JESUS: What Catholics Believe The Baby and The Archbishop »