Radical Islamic Terrorism and the Spirit of the Crusaders 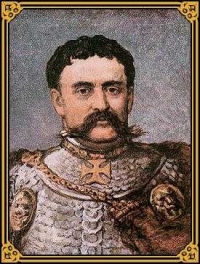 Jan Sobieski
Each time a terrorist attack takes place or an Islamist bomber plants his (or her) deadly device in a crowded market place or at school or in a concert venue, I recall again that remarkable film that remains seared in my memory, “Day of the Siege.” I have written about it and strongly recommended it in other published articles. A shortened, more compact version of a longer, Polish-Italian production, the film recounts in chilling detail the last major Muslim attempt to invade Europe, and the final, climactic battle at the gates of Vienna, September 11, 1683, that saved Christendom from the Islamic hordes…until recent decades. The small Christian army of less than 50,000 men, led by the intrepid King Jan Sobieski of Poland and Prince Eugene of Savoy, inflicted on the Islamic Turkish force of 300,000 a complete and signal defeat.

As scenes of Islamic terror in London once again dominated the headlines last night, I pulled my DVD off the shelf. It contains, in a visually stunning and well-acted emotional 114 minutes, a dramatic and historically-accurate account of how our ancestors met—and defeated—that extreme Muslim threat 334 years ago. What always strikes me when I watch “Day of the Siege” is that somehow the production team, writers, and director managed to avoid and escape the fierce politically correct “iron curtain” overlay and state censorship that affects so many European countries these days. For the film, in addition to being a superb historical drama, with all the military action and suspense that one could want, is at its heart a superb religious epic that beckons us to recall our history, our heroic forefathers, who were not only not afraid to demonstrate their faith, but who were also ready to forthrightly defend it and die for it.

How Europe and the West have fallen since then!

Our Catholic faith, certainly, is a loving and charitable faith which invites others to freely accept it and its graces. But too often in the modern age Christians forget the model of St. John of Capistrano, the fearless Franciscan monk called the “soldier saint,” who at the age of seventy led Hungarian troops, a cross in one hand and a flashing sword in the other, to relieve the siege of Belgrade (1456) by the Islamic Ottoman Turks. Or, that intrepid Capuchin friar, Blessed Marco d’Aviano, who in 1683 convinced the Holy Roman Emperor Leopold I to stand firm against the seemingly invincible Muslim army under Kara Mustapha at Vienna.

Not only Europe, but we in the United States are perishing for such larger-than-life crusaders in 2017.

Just the other day the local media hereabouts, including the politically correct WRAL-TV [Raleigh NC], was once again fawning all over Islamist students who “feared” for their safety from “extremist” and “bigoted” (presumably white) Christians. We were, once again, admonished that such minorities are a “protected class,” and that they must enjoy a special status. Any criticism of Islam, be it of the most respectful and benign nature, is ipso facto, a manifestation of prejudice and “hate,” and will get you (dis)honorable mention by Morris Dees’ Southern Poverty Law Center.

It is readily apparent that this strenuous defense of Islam is in fact an integral part of a much larger, ongoing narrative in which certain minorities, whether in the Third World or here in the United States (and in Europe), who have been identified as historically “oppressed”—that is, colonialized, ruled, exploited—by white Europeans, are now idealized totems in something resembling a new multiculturalist Marxist religion. While these minorities can do no wrong, their “oppressors” can do almost nothing right. There must be, rather, a continual and never-ending expiation of our inherited sins and guilt, which involves, variously, immense “reparation” payments and wealth shifts, affirmative action legislation, special treatment and preferment in education and the job place, and a strict “off limits” for any serious criticism of perceived faults. And that includes the attitude of our governing elites to vicious acts of terror, which they explain away as “acts by isolated radicalized individuals” who have experienced hostility historically from “the dominant culture” and who have not received the necessary compensation from our welfare state! So, in a sense, given their history of being oppressed and the failure of the West to offer them proper recompense, they are justified in their outrage.

This scenario is replicated almost daily, blared out from our television monitors, screamed at us via the Internet. Our children are indoctrinated by it in the public schools; our entertainment industry insinuates it into our films, our arts, and our music. Our government legislates it.

Yet, I would suggest that those much-adored “protected minorities” are, in fact, merely pawns in a much larger conflict, and that conflict is a cultural war to the death against the historically Christian West, its institutions, its traditions, and the fundamental faith of its fathers who created it. That war began centuries ago. And today it is captained by the forces of what we call the Deep State, the establishment and managerial elites, who seek to create a globalist new world order. Whether with the European Union or the Paris Climate Treaty, or here in the United States, with hundreds of regulations on everything from trade, climate, and affirmative action, to a virtual domination of our supposedly “democratic” political process by entrenched elites, that seemingly irreversible process, that multifaceted cultural war, continues. 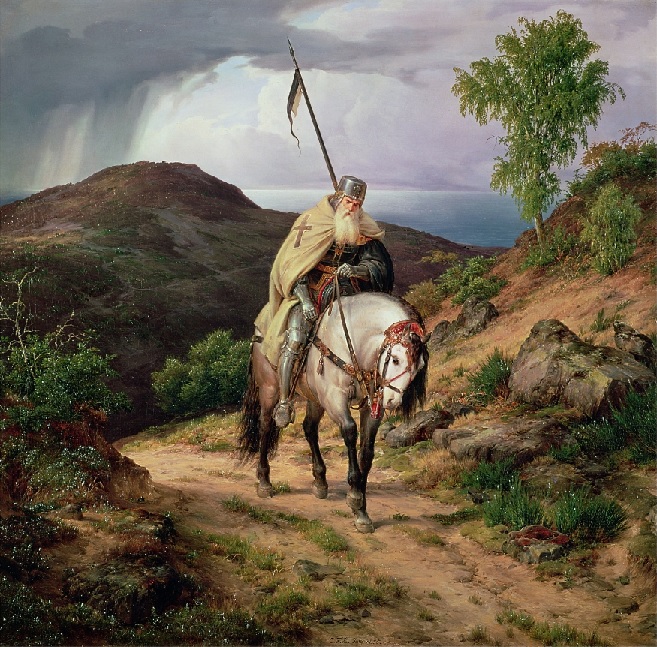 And until those who actually oppose its triumph mobilize and fight back, those like St. John of Capistrano and Blessed Marco who are willing to take up the Cross in one hand and the swift sword in the other, that ages-old Revolution will march on and continue to inflict its havoc and destruction on our civilization and our faith, using demonic Islamic terrorists as foot soldiers. It is an image that William Butler Yeats summoned up a century ago in his poem, "The Second Coming,” of the "rough beast,” the Evil One, held down for twenty centuries by the "rocking cradle" of Bethlehem. And that “rough beast” now slouches back to regain the world.

Over three centuries ago at the gates of Vienna Kara Mustapha exclaimed, “We shall return in a later generation and water our horses in the Tiber River and at the Vatican in Rome and turn Notre Dame Cathedral into a Mosque.” Has that not already happened? Have not whole banlieus of Paris, Cologne, and Stockholm been conquered by sharia law, zones into which regular law enforcement dares not enter? And what about immigrant neighborhoods of Minneapolis, or of Los Angeles, or of Chicago, where extremist Islam has taken root? Have they not been also conquered by enemies of the Cross, sponsored and defended by the Deep State…and now abetted by the “trahison des clercs”?

To those whom the sacred trust of defending both our civilization and the Church was confided, have those defenders not crossed to the other side and handed the keys over to the Enemy? And in that process the pews of many of our churches have been emptied, and too many faithful have had their faith subverted and wrenched away from them. Our seminaries have been decimated. And in modernist Rome the talk is of…climate change and normalizing immorality.

On November 21, 1974, Archbishop Marcel Lefebvre spoke for those inheritors of St. John of Capistrano and the weight of Catholic tradition when he offered his “non placet” to the Revolution:

“We adhere with all our heart, and with our whole soul to the Catholic Rome, the Guardian of the Catholic Faith and of those traditions necessary for the maintenance of that Faith, to eternal Rome, Mistress of Wisdom and Truth.

“Because of this adherence we refuse and have always refused to follow the Rome of neo-Modernist and neo-Protestant tendencies such as were clearly manifested during the Second Vatican Council and after the Council in all the resulting reforms.”

Armed radical Islam is on the march, and its votaries are true believers. And this time the supposed defenders of the Faith and the Christian West, even in Rome, have fled the field, or worse, hope to use Islam to bring down a civilization that they, too, detest.

Our battle, then, is doubly difficult. For we must defend our Faith and beliefs from both Islam externally and from those “fifth columnist” traitors to the Faith internally. It is up to us and to groups such as the Society of St. Pius X to advance the colors as “milites Christi.” Do we possess the faith of our ancestors and have the courage to oppose the Evil that engulfs us—to remain faithful to the Faith even if an angel appear and preach a contrary doctrine?

At Vienna, when questioned how such a small Christian force could defeat an overwhelming enemy that outnumbered it more than six to one, the Blessed Marco d’Aviano answered: “If you believe and hold to the Faith, you will win.”

[Comment Guidelines - Click to view]
The Remnant values the comments and input of our visitors. It’s no secret, however, that trolls exist, and trolls can do a lot of damage to a brand. Therefore, our comments are heavily monitored 24/7 by Remnant moderators around the country.  They have been instructed to remove demeaning, hostile, needlessly combative, racist, Christophobic comments, and streams not related to the storyline. Multiple comments from one person under a story are also discouraged. Capitalized sentences or comments will be removed (Internet shouting).
The Remnant comments sections are not designed for frequent personal blogging, on-going debates or theological or other disputes between commenters. Please understand that we pay our writers to defend The Remnant’s editorial positions. We thus acknowledge no moral obligation whatsoever to allow anyone and everyone to try to undermine our editorial policy and create a general nuisance on our website.  Therefore, Remnant moderators reserve the right to edit or remove comments, and comments do not necessarily represent the views of The Remnant.
back to top
Last modified on Tuesday, June 20, 2017
Tweet

More in this category: « FATIMA AFTER 100 YEARS: Matt & Ferrara on Location ABORTION'S LEGALITY REMAINS IN PLAY: The Supreme Court has revisited the issue numerous times since 1973 »